Inside the 5G smart factory: Augmented technicians and cobots are the future 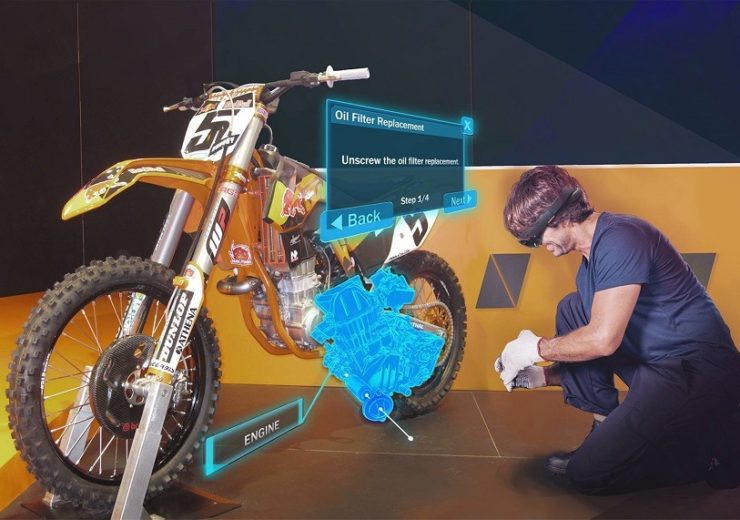 The 5G smart factory will feature augmented technicians, who use technology like the Spectral Applications augmented reality headset to help them carry out maintenance tasks

The impact of the Fourth Industrial Revolution on manual labour jobs often sparks fears – but augmented technicians and “cobots” will populate the 5G-powered smart factory of the future.

These are just some of the innovations that suggest enhanced connectivity – 5G is estimated to be at least ten-times quicker than 4G – will enable technology to work alongside, rather than replace, humans.

Much faster and more reliable internet speeds means everything inside factories – whether machine or human – could be connected with each other to create a seamless production line that gives a huge boost to output.

Orange Business Services CEO Helmut Reisinger says: “As far as factories of the future are concerned, connectivity will have very short latency and everything is done at practically real-time.

“This is true when it’s machine-to-machine and machine-to-human communication.

“Business models will be transformed because of this real-time effect. There’s going to be a huge amount of connected objects across a 5G network and there’ll be an entirely different design of a connected industrial campus, which is the whole industrial eco-system.

“For example, a lorry comes into a very large factory and you immediately know what the load it’s carrying is.

“There will be all sorts of automation – it’s going to be a fully digitised world.”

Mr Reisinger is speaking last month at the Orange Business Summit held in in Paris, where other examples of how the 5G smart factory could look is showcased.

Machinery has been slowly eating into human jobs for a while now but the introduction of “cobots” – or collaborative robots – could help stem the tide of redundancies by recognising the important role of people in factories.

On show at the Orange Business Summit is the YuMi cobot, which was developed by automation giant ABB Group in 2015.

Cobots are able to add flexibility to assembly processes that need to make small lots of highly individualised products in short cycles.

The dual-arm YuMi has sensors on its arms and integrated HD cameras capturing footage of its work station, streaming through 5G so decisions are taken in real-time.

This is combined with artificial intelligence to analyse the situation so it can understand whether there have been any mistakes in the process.

ABB says the cobot is capable of handling anything from a watch to a tablet PC with the level of accuracy that could thread a needle, enabling it to generate higher product volumes in small parts assembly, such as electronics.

Orange network mareting project manager Olivier Wioland says: “The cobot is capable of working with me and correcting my mistakes.

“The mission isn’t just to connect your robot in a factory but with several robots to increase collaboration, offering productivity gains and more digitisation.

“With 5G, the network is much more reliable and we have the possibility to connect a lot of objects in the factory.”

Workers can also stream video and audio from the device to remotely-based engineers, who receive a first-person perspective of the work being carried out.

The expert can then send precise visual instructions that are superimposed on the technician’s field of view using AR.

The smart glasses can also connect with sensors on the equipment to display relevant real-time annotations such as temperature and humidity layered digitally over the real-world environment.

“If they want the help of an engineer, that’s possible because the glasses can connect to a remote engineer, who can see what the person on the scene can see.

“It means that teams can act as if they’re in the same place even if one is in Paris and the other is in London, and manage everything real-time through 5G.”

Schneider Electric, which is testing out a 5G smart factory concept as part of its work in digitally transforming energy management automating processes, has been an early adopter of AR in recent years and believes hyper-connectivity will enhance the technology.

Christel Heydemann, executive vice-president of France operations at the company, says it helps to ensure safety of technicians when carrying out electrical maintenance work by enriching dashboards with data that can be read remotely.

“There’s a very easy detection of anything that’s gone wrong so it enables very rapid intervention on-site,” she says.

“Thanks to AR, we’ve been able to guarantee the security of our operators.”

The technology has also been used for “critical processes” when the factory has a shutdown every few years.

Ms Heydemann says: “These maintenance operations have to be very short and the duration is critical. We have developed tools with operators to repeat scenarios.

“Sometimes these operations don’t even exist on site but the idea is to use AR to compare with what we’ve already seen and deploy that on site.

“We believe 5G is going to provide more fluid operations because we will be able to anticipate and provide extra support through the different networks.”

Agility in the 5G smart factory

As well as testing out the value of 5G for real-time AR at its factory in Le Vaudreuil, Normandy, alongside Orange later this year, Schneider Electric uses robots and autonomous vehicles at its sites.

This new technology has helped to upgrade plants – rather than requiring new ones to be built – while the workforce has been upskilled to work alongside it.

Ms Heydemann, says: “It’s given us a degree of agility. If you don’t have 5G, you ask yourself a lot of the time how to connect this sensor to the machine so it gives you agility to road test.

“5G offers us an ability to test things quicker and move things around because a robot running off a cable can’t operate as freely as one that’s wireless.

“All our staff have tablets so maintenance can be done remotely. Wi-Fi is okay but not up to scratch for everything we want to do as it’s better for offices.

“There’s a whole range of use patterns we’re testing with Orange for our own needs and our customers’ needs.

“We want augmented reality and data management to be flexible. The reason we’re doing this is because competitiveness is really key as an industrial player.

“If you aren’t ahead of the game and at the leading edge of technology, you’re going to lose at the end of the day.”

‘Symbiose’ 5G smart factory could be an industry prototype

French hi-tech equipment supplier Lacroix Group, an SME with an international reach, will work with Orange to explore how 5G can be used in a prototype smart factory.

Known as “Symbiose” – which translates as Symbiosis, describing a relationship between two entities that depend on each other equally – the project aims to convert a 100-year-old plant in Maine-et-Loire, North-West France, into a smart electronics factory fit for the future.

The trial will involve setting up an indoor network to test ambient connectivity in an industrial site, as well as optimising production using automated and connected vehicles through 5G.

Lacroix Group CEO Vincent Bedouin says the company is aiming to make a “total departure” from its industrial past by making sure “everything is connected to get information and retrieve it quickly”.

“It will have driverless vehicles and workstations that need to be reconfigured constantly,” he says.

“We really need to make sure everything is in real-time, otherwise there’s too much stock.

“In a very quick time frame, we need to make sure a component is available to be sent across the world.

“To achieve big data at industrial level, we need hyper-connectivity in real-time so there’s no need to shut everything down.”