The Forbes 30 Under 30 list for consumer technology professionals and entrepreneurs in the US and Canada features founders of promising start-ups such as Snap Travel, HelloAva, Noonlight and Plotaverse 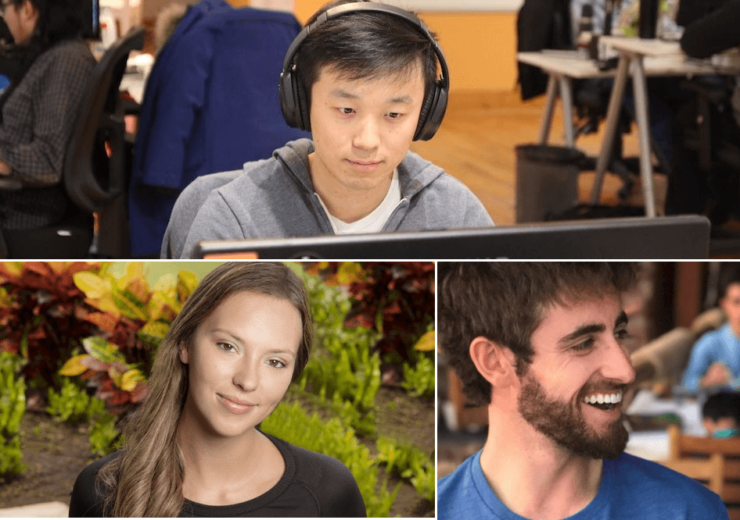 The Forbes 30 Under 30 2019 list for US and Canada in consumer technology features (clockwise from top) Henry Shi, James Ruben and Sascha Scheider

As the home of Silicon Valley and various other creative hubs, North America is bursting at the seams with young tech talent all striving to be the next Mark Zuckerberg.

Ever since he created the world’s most popular social network in a college dormitory at the tender age of 19, the Facebook founder has been held up as the entrepreneurial benchmark for talented young people in tech.

And they’re innovating just about everything we’ve come to know – from using artificial intelligence to personalise beauty products and create robot cafés to piggybacking on the sharing economy explosion with a wave of new apps.

Forbes has picked out the cream of the crop for 2019 with its 30 Under 30 list for United States and Canada, with consumer technology one of the stand-out categories.

It features bona fide whizz-kids – Google’s youngest product manager and the woman who led the Twitter team that doubled its character limit to 280 – and founders of promising start-ups such as Snap Travel, HelloAva, Noonlight and Plotaverse.

Many of their ideas are vastly different and could be revolutionary but there’s a common theme – they’re all in their 20s and out to change the world.

After shining the spotlight on the best of Europe last week, we profile 11 people in the US and Canada who have set their sights on becoming the next Mark Zuckerberg.

One of the younger members on the Forbes 30 Under 30 list, Michael Sayman thoroughly warrants his inclusion as the youngest product manager at Google, aged 22.

He works on the fast-growing Google Assistant, an AI-driven personal assistant, and is rumoured to be heading up a new social gaming start-up within the company.

Great things were expected of Miami-born Michael from a young age, having published his first app to the App Store, popular word guessing game 4 Snaps, when he was 13.

Mark Zuckerberg personally hired him at Facebook when he was 17 and, during stints as product manager and designer, he helped turn Instagram into a Snapchat competitor.

Michael has developed dozens of apps to date that have been downloaded more than three million times worldwide.

The company, which has received $30m in investment to date, says drivers for app-based taxi services like Uber can earn $100 per month on average by selling Cargo’s box of snacks, which is often attached to arm rests, to passengers.

By scanning a QR code on the outside of the box with a smartphone, riders can see a menu of its contents.

Since being formed in 2017, Cargo has surpassed two million orders across ten US cities, with more than 12,000 drivers earning $2.4m.

At the age of 27, Ryan Delk is chief operating officer of Omni, which is aiming to take the sharing economy to a new dimension by giving consumers the chance to rent just about anything.

Customers can have items they want to keep – but don’t need for now – picked up by the company and stored away.

The items – which could range in anything from a bike or water cooler to air mattress or kitchen set – then become part of the Omni platform for other users to rent, with the owner taking a cut.

The start-up, founded in 2014 and currently available in the San Francisco Bay Area and Portland, has raised $35m in investment.

Ryan joined Omni in 2015 as vice-president of growth and business development, before rising to head of product and now COO.

He is credited for changing the company from merely being a storage firm to a rentals network.

A robot café might sound like the sort of concept from a sci-fi film, but Henry Hu is making it a reality with Cafe X.

Robot baristas serve coffee as efficiently as an assembly line, with the ability to make up to three drinks in 40 seconds.

Currently operating in San Francisco, the robots are located behind a glass screen, with customers ordering from a fixed tablet screen or mobile app and collecting their drink from a small window.

Henry, 24, built the company after dropping out of college and has since recruited more than 20 people, while raising $12m in funding.

The New York start-up uses artificial intelligence in its messaging bots, which interact with customers and recommend products based on each person’s unique skincare needs.

HelloAva has raised $1.5m in investment and Siqi has won recognition, such as being named in the L’Oreal Women in Digital 2017 list, as well as Forbes and Inc’s 30 Under 30.

When friends Nick Droege and Zach Winkler, now both 27, set up SafeTrek in 2013, they initially wanted to give college students peace of mind when walking between points A and B.

But the company has expanded beyond the University of Missouri campus on which its foundations were laid to become a platform that protects all consumers and what matters most to them.

Since renamed as Noonlight, it connects smart devices to enable automatic emergency response and integrates with tech such as Amazon Alexa, Google Home, Apple Health and Lyft.

For example, it will send first responders to a user’s home when suspicious motion is detected, to their vehicle immediately after a crash or to their location when their heart rate reaches a dangerous level.

To date, the company has assisted in more than 100,000 emergencies.

When Twitter increased the character limit for posts from 140 to 280 in late 2017, it was a seminal moment in the evolution of social media.

The 27-year-old, who joined the social media giant from LinkedIn in 2015 after a previous stint as an intern, now oversees a 40-person team that is focused on improving Twitter’s mobile notification experience.

As might be expected, she’s a fairly prolific tweeter under the handle @alizar.

Sascha Scheider is the CEO and co-founder of motion app Plotaverse, which was listed by MarketWatch as one of 2018’s top innovations and as one of the top five photo apps for advertising by Facebook.

Plotaverse features a suite of five motion photo editing apps that have been downloaded more than six million times, and used by celebrities including Kim Kardashian, Paris Hilton and Ariana Grande alongside brands like Adobe Photoshop and GoPro.

Sascha, 26, founded the company as Plotagraph alongside Troy Christopher Plota in 2014.

It’s her second business, with the first one – set up while she studied fine art in Florence, Italy, at the age of 17 – an online community connecting artists with gallery spaces that taught creatives how to monetise their work.

Since its release in August 2017, HQ Trivia has become one of the world’s most popular online quiz games.

It’s now played by tens of millions of people, given away millions of dollars in prizes and featured celebrity guest contributions from the likes of Robert De Niro, The Rock and Gordon Ramsay.

While it was developed by the creators of short-form video hosting service Vine, one of the key drivers of its rapid growth has been director of product James Ruben.

Still only 24, he has helped grow the app from a prototype to an international phenomenon, while spearheading partnerships with brands including Nike and Warner Brothers.

The former Google product manager has also overseen the launch of new features and shows such as HQ Sports and HQ Words.

Henry Shi wanted to make booking a hotel room as easy as chatting with a friend over Facebook Messenger or WhatsApp.

So he co-founded Snap Travel, which does precisely that. There’s no app to download and, instead, users can message the company over messaging platforms, with a bot finding the best hotels at the best rates.

Since being founded in Ontario, Canada, in April 2016, the platform has been used by more than 1.7 million people – with 94% of bookings completed without any human involvement – and Snap Travel has raised more than $9m from investors.