Who is Stan Kroenke? Profiling the LA Rams owner with a sports business empire

LA Rams owner Stan Kroenke made his billions as a property developer and sports business tycoon, with interests in a number of sports teams 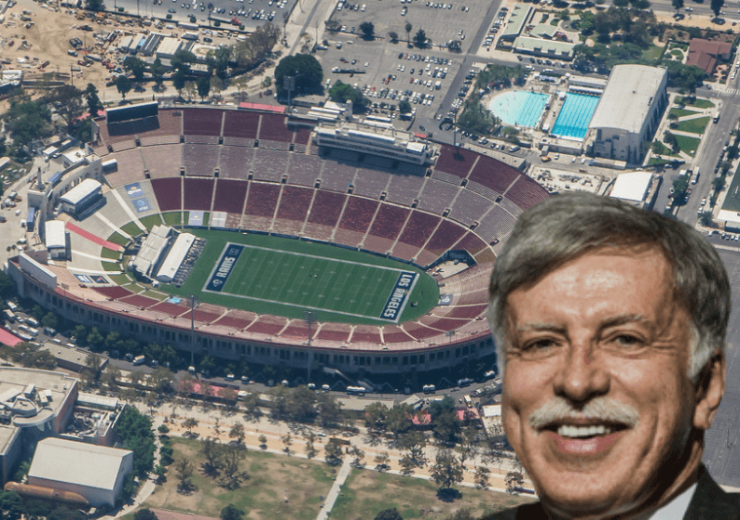 Stan Kroenke is owner of the LA Rams

Should the LA Rams triumph in the 53rd Super Bowl, there’ll be plenty of fans wanting to celebrate by hoisting Stan Kroenke in the air.

The 71-year-old American billionaire is the owner of the National Football Conference champions, who will take on New England Patriots for the biggest title in the NFL at Atlanta’s Mercedes-Benz Stadium on Sunday.

He was the man responsible for moving the NFL franchise from its previous home in St Louis, Missouri, to Los Angeles in 2016.

Having reached the play-offs for the first time since 2005 last season, Kroenke – who has an estimated wealth of $8.3bn (£6.5bn) and also owns English Premier League club Arsenal – will be hoping to bring the Super Bowl home to California this time around.

Who is Stan Kroenke? From sweeping floors to building shopping centres

Full name E Stanley Kroenke, the future magnate was born on 29 July 1947 in a tiny community in Columbia, Missouri, far away from the glamour of LA as the son of a lumberjack.

His working career began as a child, when he swept the floor of his dad’s lumber yard and, by ten, was reportedly keeping the company’s books.

In 1983, he founded Kroenke Group, a construction firm that has built shopping centres near Walmart stores and apartment blocks.

Another company in the same industry he founded in 1991 was THF Realty, which focuses on developing suburban areas.

By 2016, it had amassed a $2bn (£1.5bn) portfolio and was handling 100 large-scale projects – particularly shopping centres.

In 1999, Kroenke broadened his horizons beyond property and laid the foundations for a sports empire by setting up Kroenke Sports & Entertainment.

The company owns a number of sports stadiums, including the 20,000-seater Pepsi Center in Denver, Colorado – which is home to the NBA team Denver Nuggets and NHL side Colorado Avalanche – and co-owns MLS outfit Colorado Rapids’ ground in the same city, named Dick’s Sporting Goods Park.

Both arenas were built by Kroenke and double up as concert venues, with adjoining commercial and retail space.

KSE Outdoor Group was formed in 2015 and is said to be one of the world’s largest multimedia groups.

But in Britain, Kroenke came under fire in 2017 for starting the My Outdoor TV channel, which screened hunting programmes.

Some of his sports businesses have been set up to link up with his professional sports empire.

The tycoon launched his own regional sports network Altitude in 2004 and ticket company TicketHorse (now Altitude Tickets) three years later in the US.

Both effectively act as in-house services for the sports teams he owns – a growing portfolio in its own right.

Which sports teams does Stan Kroenke own?

Alongside the LA Rams, the Kroenke family owns the Denver Nuggets of NBA, Colorado Avalanche of the NHL, Colorado Crush of Arena Football League, Colorado Mammoth of National Lacrosse League, Colorado Rapids of MLS and Los Angeles Gladiators of the e-sports Overwatch League.

Outside the US, he is also the owner of English Premier League football side Arsenal.

However, the Denver Nuggets and Colorado Avalanche are owned by his wife, now known as Ann Walton Kroenke, to satisfy NFL ownership rules.

Kroenke’s interest in professional sports began in 1994, when he made a $200m (£153m) offer to buy the New England Patriots with the intention of moving the team to St Louis, where he was based.

But his bid was turned down in favour of Robert Kraft, a Boston businessman who had bought the team’s old Foxboro Stadium six years earlier.

The Patriots haven’t looked back, winning five Super Bowls during that time, and will be hoping to add another when Kraft’s side meet the Rams in Super Bowl LIII on Sunday.

Kroenke instead turned his attention to the Rams and – in another twist of irony – helped American businesswoman Georgia Frontiere move the franchise from Los Angeles, where it had been based since 1946, to St Louis in 1995 by buying a 30% share.

Finally, he had a foot in American football and, after her death in 2008, exercised his right of first refusal to buy the remaining shares of St Louis Rams to become its sole owner.

Despite claiming he would do “everything I can to keep the Rams in St Louis” in 2010, Kroenke moved the franchise back to LA in 2016.

Three years earlier, he won a legal case against the City of St Louis over the stadium not being in the “top tier of NFL stadiums”, giving him permission to break the lease agreement.

Plans for a new stadium in the LA suburb Inglewood were later unveiled and – despite St Louis countering with a proposal for an open-air riverside stadium in downtown – Kroenke claimed the city was no longer a viable market for the NFL.

The team moved in time for the 2016 season and have now reached the play-offs for the second consecutive season – and will play in the Super Bowl for the first time since the Rams lost to the Patriots in 2001.

Speaking at the time of the relocation announcement in January 2016, NFL commissioner Roger Goodell said: “The Rams are returning to their home of Los Angeles with an incredible stadium complex that will exceed all expectations of our fans in the entertainment capital of the world

Kroenke has received a mixed reaction over his sports teams. While he was not judged to be a particular success at the helm of the St Louis Rams, he has won plaudits for his stewardship since moving to LA.

Reaction is also mixed, at best, in English football since first becoming involved with Arsenal in 2007, when he bought a 9.9% share from a subsidiary of UK television network ITV.

It was at that time when he agreed a deal to buy out Russian-Uzbek rival Alisher Usmanov, the only other major shareholder who owned 30% of the club, in a deal valuing the club at £1.8bn.

He is now trying to conclude a compulsory purchase order for the remaining minority shares but faces a backlash from Arsenal fans against his complete ownership.

Kroenke has faced mounting criticism from supporters over his perceived underinvestment and absenteeism.