Used by 850,000 freelancers and 5.5 million businesses in 160 countries, Fiverr is aiming to become the go-to marketplace for the increasingly popular side hustle 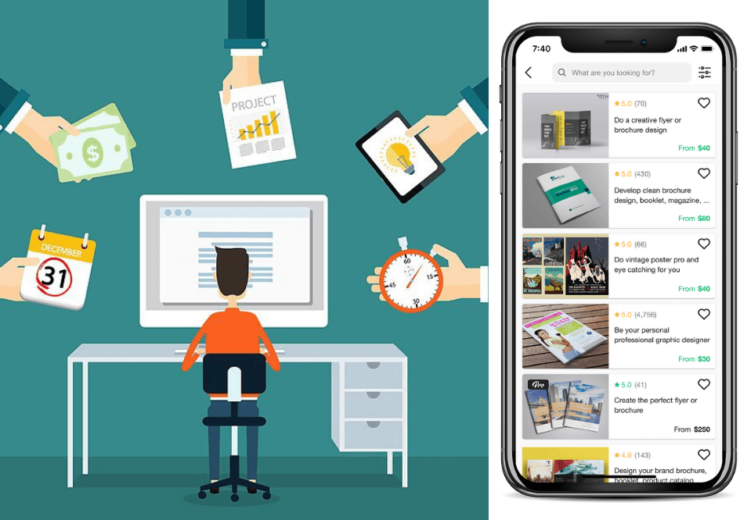 Fiverr is an online marketplace for freelancers

Freelancing has never been more popular, with 162 million people in the US and Europe estimated to be engaged in “independent work” as the side hustle becomes a key contributor to total income. One of the most popular online marketplaces is Fiverr – its UK lead Andrew Wray outlines to Dan Robinson how it works

It’s all about who you know, not what you know – a famous adage that remains applicable in many domains, but perhaps less so now in the world of freelance work thank to technology.

There was a time when going out on your own required a packed contacts book of potential clients and classified adverts in local newspapers or industry publications.

But the rise of online marketplaces for freelancers, including Upwork, Freelancer.com and PeoplePerHour, has made it easier for individuals to win short-term work from companies across the world looking for ad hoc services.

The latest is Fiverr, an Israel-based company that’s just floated on the New York Stock Exchange with a mission to “make it as easy to by a digital service as it is to buy something from Amazon”.

Like other platforms, it aims to reduce the friction that comes when traditionally hiring freelancers by turning it into a simple, fast, reliable and “productised” experience – although it differs from rivals in removing the need for freelancers to pitch for work, instead just giving them a shop window in a huge range of services.

“Lots of people are developing side hustles but don’t know how to contact businesses, so they use platforms like ours to get their ideas off the ground,” says Andrew Wray, who heads up Fiverr’s new UK arm.

“Freelancers would previously rely on friends and local networks but we’re a shop front that’s bringing global traffic to freelancers.

“We’re also seeing more and more mainstream businesses shifting to project-based work rather than full-time employment, so they’re pulling resources from Fiverr to get projects done.

“That’s a shift in working culture and it’s speeding up in terms of businesses getting more educated and a growing trust in online services. People talk about the ‘future of work’, but it’s happening right now.”

What is Fiverr and how does it work?

Fiverr is an e-commerce marketplace that connects businesses of all sizes with skilled freelancers who are selling “digital services”.

These are defined by the company as anything that doesn’t require the individual providing them to be in the same room as a client.

And those services are vast – graphic design, app-building, voiceovers, digital marketing, translation, video editing, web design and WordPress assistance are just some of the popular skills on offer across more than 200 categories.

CEO Micha Kaufman founded the company in 2010 with Shai Wininger – now COO of home contents insurtech Lemonade but still a Fiverr board member – within the thriving tech hub of Tel Aviv, where there are more start-ups per capita than anywhere else on Earth.

That was when they came up with their vision of making the act of buying freelance services as easy as ordering from the world’s busiest e-commerce website.

Andrew elaborates: “The view is that the traditional recruitment system for freelancers is offline and cumbersome – it’s very back and forth.

“With Fiverr, we provide the transparency to offer a secure platform for a buyer and seller to communicate and make sure the job is fulfilled correctly.”

Initially, the idea surrounding the platform – and reflected in its name – was that each job cost $5. If a freelancer wanted more, they’d have to ask buyers to make multiple orders or sell add-ons.

But this meant the services were fairly basic – the Fiverr website carries a story about a musician who sold videos of himself singing Happy Birthday for $5 a go – and, in 2013, the company upped the limit to $500 to help its marketplace upscale.

This has since been increased again and services now cost anywhere between $5 and $10,000.

Fiverr’s benefits for freelancers and businesses

Freelancers can sign up to Fiverr and set up their “gig” for free – explaining what the service they provide is and how much it costs.

They’ll be notified when an order is delivered and can use the online system to discuss details with customers.

Payment is then transferred once a job is completed and the freelancer is rated out of five, encouraging them to build a reputation.

No subscriptions are required but Fiverr takes a 20% commission from every transaction.

Andrew explains: “How we differ to a lot of the other marketplace platforms is we don’t ask freelancers to bid for work – we ask them to upload their skillset, outline how much they think it’s worth and then businesses can connect with them.

“A lot of the other players will ask for a business to upload a brief and the freelancers have to bid.

“But you get a lot of under-cutting and it creates downward pressure.

“One of our strengths is we have a huge breadth of price points and talent levels across the platform, which are supported by the peer-to-peer ratings system.”

While freelancing is the main source of income for some of its service providers, there are many who just use it for some extra pocket money.

Trends show this is becoming more common, too, with the number of freelancers in the UK growing by 47% in the past decade to about two million now.

Research by Fiverr found that 43% of full-time workers in Britain have a side hustle.

The McKinsey Independent Work Study, meanwhile, estimated there were up to 162 million people engaged in “independent work” in the US and Europe in 2016.

“A lot of those people are using a platform like Fiverr to get their idea off the ground,” says Andrew.

The side hustles that are growing in popularity could range in anything from earning money for professional skills to selling items on eBay and renting out spare rooms on Airbnb.

It’s a reflection of how important the sharing economy is. The peer-to-peer business model pioneered by the likes of Airbnb and Uber, in which people can access services though short-term rentals for much cheaper than buying them, has expanded into numerous other modes of money-making.

Andrew cites his company’s research, which found that two-thirds of Brits are considering quitting their jobs to go freelancing, while there’s been a 50% rise in self-employment over the past decade.

“It’s accelerating quickly,” he adds. “An increased confidence in the sharing economy and digital interactions over the past ten years is driving this.”

For many previously unfamiliar to the platform, Fiverr will have come to their consciousness when it went public in June 2019, with shares rising 90% above the initial public offering (IPO) on the first day of trading.

Andrew says “On one level, it helped to bring good publicity and trust in what we’re doing, but it also acted as validation for the freelancer marketplace like our own.”

While the company hasn’t announced much in the way of plans to follow its entry on the New York Stock Exchange, it’s expected to follow a steady trajectory of growth witnessed in recent years.

As of last year, the platform was used by two million businesses to buy services from more than 250,000 freelancers in 160 countries.

Fiverr says a gig is bought every four seconds and, in total, its marketplace has facilitated more than 50 million transactions between 850,000 freelancers and five-and-a-half million businesses.

The company itself is growing, with 363 staff recorded at the end of March 2019 and this expected to rise as new offices are opened in the likes of Britain and Germany.

Andrew adds: “Going forward, we’re looking to open up to all categories – such as our new video gaming industry store – and expand globally.

“We want to be a champion and leader in bringing this new future of work and flexible style.”