From shoe manufacturers to a telecommunication company, we look at the top ten biggest sponsors going for glory at this year's Tour de France 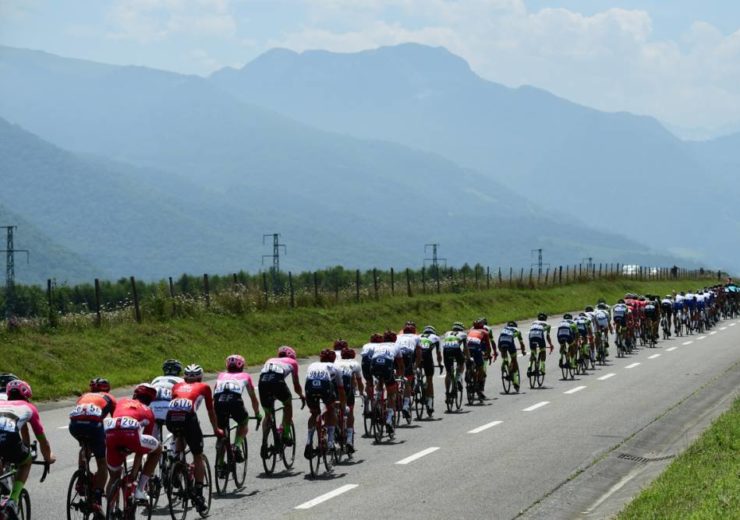 It’s the world’s oldest road bicycle race, and sponsors have been a key part in the Tour de France throughout its storied history.

Set up in 1903, the roots of the annual ride around the French countryside came off the back of a marketing stunt by L’Auto – ancestor of France’s leading sports paper L’Équipe.

Wanting to use the race as a promotional tool, the publication changed its paper to yellow to stand out – inspiring the famous yellow jersey given to the winner of the 21-stage race, which this year lasts from Saturday (6 July) until 28 July.

And sponsorship is a key part of the way cycling teams are financed, with the Tour having private teams instead of national squads since 1969.

In recent years, with the rise of professionalism in sport, the need for a big backer in any field has become ever more important.

While they are supplemented by a number of smaller backers, he says these main deals are “absolutely essential” for the teams to compete throughout the cycling season – saying 70% of a team’s annual budget will come from sponsorship.

With Team INEOS far ahead of the pack when it comes to finance with an $11m lead over its next rival, every other team is playing catch-up, he believes.

Mr Wiacek adds: “While exceedingly well resourced themselves, teams like Astana and Movistar can’t compete with the numbers injected by INEOS and Sky previously so are at a disadvantage.

“However, any challenge to this dominance is likely to come from the pack of teams who are able to generate those eight-figure sponsorship spends.

“Those teams without financial backing are unlikely to trouble the top of the general classification standings, but will be looking to make a mark in other areas.

“A simple stage win or putting a rider in contention for one of the other jerseys can help change the perception of the team and therefore could potentially generate more lucrative endorsements in the future.”

One of the problems faced by cycling has been a stream of doping scandals over the past couple of decades.

Despite “losing some of its sheen”, according to Mr Wiacek, it remains one of the world’s premier sporting events and therefore an attractive proposition for brands.

“While some of the teams may struggle to may ends meet, the Tour itself has no such issues, generating over $40m annually through its sponsorship portfolio – which shows that the Tour is in rude health despite some of its recent issues,” he adds.

“With a narrative around endurance, bravery and spirit, the race and the iconic yellow jersey are synonymous with the sport of cycling and it is this history and tradition which makes the race such a commercial success.

“While the other grand tours have affection from other cycling fans – much like the Monaco Grand Prix, Wimbledon or even the Grand National – the Tour de France is the crown jewel of its sport and cuts through with those who may not follow the sport as closely, making it an invaluable commodity to the sport itself.”

From the established names to the new kids on the block, we take a look at the top ten Tour de France 2019 teams in terms of their sponsorship income – and profile the title backers.

By far and away the richest and most well-known team at the Tour de France, Team INEOS makes its debut under its current guise in the 2019 race.

Owned by Britain’s richest man Sir Jim Ratcliffe, the petrochemical giant is the world’s biggest company in its industry and one of the UK’s largest private businesses, recording sales of about $60bn and employing 21,000 people globally.

The company is involved in the development of plastic packaging, synthetic oils, chlorine for drinking water.

It also provides materials to insulate houses and offices, as well as electrical and telecommunications cables – while most recently it has been one of the major companies exploring fracking for shale gas in Britain.

INEOS took over as primary sponsor of the UK-based cycling team after its first sponsor, broadcasting company Sky, announced it was pulling out of the sport following a nine-year association with the squad it helped to set up in 2010 alongside general manager Sir Dave Brailsford.

It’s not the first sport that INEOS has been involved in, with sailor Sir Ben Ainslie’s UK team for the America’s Cup still sponsored by the firm, and will compete at the 2021 competition with the backing.

With overall classification contenders Egan Bernal and Geraint Thomas featuring in this year’s Team INEOS side, there is a good chance the chemical company’s sponsorship of the team will start with grand tour success.

Mr Wiacek says the INEOS backing gives the team a “huge budget”, adding: “Given that Team Sky was a passion project of James Murdoch, the level of funding was unprecedented, which may go some way to explaining Team Sky’s stranglehold over the race over the past few years.

“This year will be the same, with Geraint Thomas favourite to retain his title.”

Astana is the longest-running side with a single sponsor riding in this year’s Tour de France.

Founded in 2007 and named after the former name for Kazakhstan’s capital city Nur-Sultan, the team is owned by Samruk–Kazyna – a collection of state-owned companies in industries such as oil and gas, telecommunications, transportation and real estate.

The cycling team is a part of the Astana Presidential Club, a collection of sports teams owned by Samruk–Kazyna, which also includes football team FC Astana, basketball side BC Astana, ice hockey team Barys Astana and Astana Arlans, an amateur boxing side.

Astana’s big hope this year is Jakob Fulsang, with the 34-year-old man from Denmark in good form this year after winning the Criterium du Dauphiné – an annual cycling stage race in the Dauphiné region in the south-east of France.

Prior to this year, the existing CCC Team was split between BMC Racing Team, a top tier outfit based in Switzerland, and second tier CCC–Sprandi–Polkowice, based in Poland.

But in July 2018, Polish shoe manufacturer CCC oversaw a merger between the two teams and took over as the sole sponsor ahead of the 2019 season.

This followed the decision from bike manufacturer BMC Switzerland to pull out of the sport after the death of team owner Andy Rihs.

CCC, founded in 1996, is one of the largest footwear retailerd and manufacturers in Europe, selling in 22 countries including Poland, Slovakia, Hungary Russia, Germany and Switzerland.

Although the team does not offer riders that could realistically go for overall victory, Belgian duo Greg Van Avermaet and Serge Pauwels could win a few stages for the team, which is licensed in Switzerland.

Arguably one of the most iconic names in modern cycling, Belgium side Deceunick-Quick-Step has been involved in the sport under the management of Patrick Lefevere – often as dubbed cycling’s answer to Sir Alex Ferguson – since 2003.

Flooring, panels and insulation company UNILIN – founded by a group of West Flanders families in 1960 and based in Wielsbeke, Belgium – has been involved with the team from the beginning, using its laminated flooring brand Quick-Step as the title sponsor.

PVC windows, doors, roof lining and cladding firm Deceunick became involved with the team at the start of this year, with the Hooglede-based business becoming the third company to partner Quick-Step in duel sponsorship over the side.

With last year’s king of the mountains jersey wearer Julian Alaphilippe one of its riders, the 2019 Tour could be another successful one for the side.

Founded in 2010 as a UCI Professional Continental team – cycling’s second tier – German side BORA–hansgrohe joined the ranks of the premier WorldTeam circuit in 2017, after the signing of Slovakian superstar Peter Sagan.

Kitchenware developer Bora – founded by German entrepreneur Willi Bruckbauer in 2006 and involved in the production gas hobs and extractor fans – first got involved in the team in 2014.

Shower and tap manufacturer hansgrohe – founded in Germany in 1901 – has been with the team since the step up to the world tour scene two years ago.

It’s likely the BORA-hansgrohe name will be atop the podium when the race finishes in Paris, with last year’s points classification winner Peter Sagan favourite to hold on to the green jersey – something he has worn all the way to Paris in six of the last seven years.

By far and away the oldest team in road cycling, Movistar Pro Cycling has been in the peloton since 1980, when it rode under the name Reynolds.

The team’s current sponsor Movistar is a Spanish telecommunications company operating both its native Spain as well as in Hispanic American countries such as Argentina and Colombia.

Founded in 1995, the company took over as sponsor of the team in in 2011, taking the place of French financial services firm Groupe Cassie d’épargne.

Although it has a predominately homegrown squad, the team will likely be riding for Colombian two-time grand tour winner Nario Quintana.

It is the first year there has been a team called Team Jumbo-Visma in cycling, but the side hailing from the Netherlands has been around since 1984.

Dutch supermarket chain Jumbo has been involved in the team since 2015, when it was the duel sponsor with the Dutch lottery – LottoNL – after American tech company Belkin pulled out its support for the side.

The Norwegian computer company Visma – founded in Oslo in 1996 – took the place of LottoNL in 2019.

Founded by the Belgium lottery, Lotto, in 1985, Lotto–Soudal is one of the most historic sides in the pro peloton.

Lotto has been a permanent with the team since the start, with chemicals company Soudal – a producer of silicone and caulks, used as sealants in manufacturing – sponsoring the team since 2015.

Home of the popular Thomas De Gent and the reigning European time trial champion and holder of the hour-record Victor Campenaerts, Lotto–Soudal will likely be one of the more prominent jerseys in this year’s race.

Australian team Mitchelton–SCOTT was launched in 2011, with its first season in cycling coming the following year under a former guise as Orica-GreenEDGE.

Swiss bicycle manufacturer Scott Sports SA first sponsored the team in 2017, alongside Australian company Orica, a metals, mining and oil and gas firm – and one of the world’s largest commercial suppliers of explosives.

Scott was joined by Australian wines, hotel, restaurant and day spa company Mitchelton in 2018, changing to its current moniker.

The Australian team comes with two Brits as its overall contention hopefuls, with twins Adam – who won the best young rider jersey in 2016 – and Simon Yates – holder of one of the three grand tours – riding at this year’s race.

Despite Mr Wiacek’s suggestion that teams with lower budgets have little chance of winning the yellow jersey, the brothers could prove an exception to the rule.

South Africa’s Team Dimension Data for Qhubeka was founded in 2007 as a UCI Continental team, before becoming a UCI WorldTeam in 2016.

In that year, Johannesburg-based tech company Dimension Data, which has been the tech sponsor of the Tour de France since 2014, came on board.

The team has had a long-running partnership with South African charity Qhubeka – which, among other work, supplies bikes for healthcare and disaster relief workers.

Its biggest hope for stage success will be 38-year-old Brit Steve Cummings, who has won two stages of the Tour in his career – in 2015 and 2016.

Outside the top ten, there will be 12 other teams competing at the Tour de France in 2019. Here we list them and the value of their sponsorship deals: