Who is Steve Easterbrook? The McDonald’s CEO fired for dating an employee 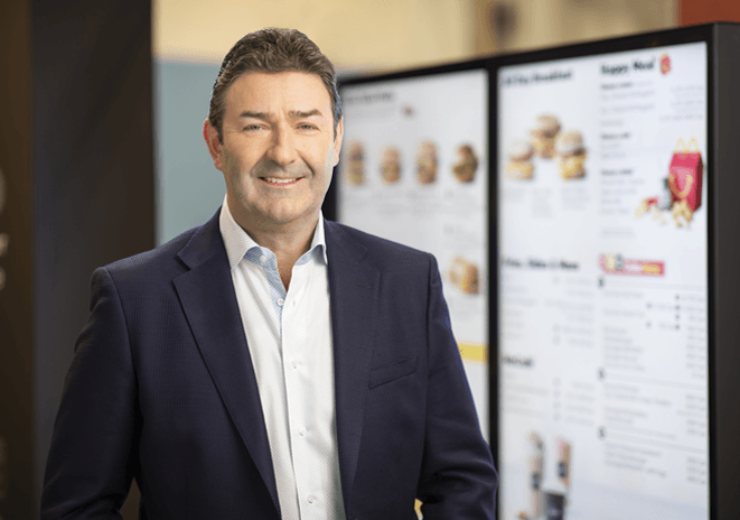 Steve Easterbrook was CEO of McDonald's from 2015 (Credit: McDonald's)

British-born Steve Easterbrook helped lead McDonald’s into the modern era, but violating the world’s largest fast-food chain’s company rules have seen him forced from his role of CEO.

McDonald’s confirmed the change of senior leadership on Sunday, revealing the company’s board of directors had determined Easterbrook “violated company policy and demonstrated poor judgment” when he decided to engage in a consensual relationship with an employee.

The 52-year-old divorced father of three said: “Given the values of the company, I agree with the board that it is time for me to move on.”

It marks an end to three years at the helm of the fast-food giant, where Easterbrook oversaw a a revamp of the McDonald’s menu and embraced technology to help turn around the business’s fortunes.

After originally training as an accountant at Price Waterhouse Coopers, Easterbrook’s McDonald’s career began in 1993, with a London-based role in the company’s finance department.

Easterbrook worked his way up to the position of UK chief executive and was credited with turning around the company’s fortunes in the region through a restaurant re-design and re-imaging programme.

The changes included the introduction of new menu items alongside training and reward schemes for employees.

He went on to be appointed European president, where he oversaw 7,000 restaurants.

The Durham University graduate has only had two stints away from the Golden Arches: The first to become CEO of Pizza Express in 2011, then CEO of UK-based Japanese restaurant chain Wagamama, a position he held until 2013.

Easterbrook — who once claimed that he ate a McDonald’s meal every day — was promoted to the top spot at McDonald’s in 2015, seeing him set out with the ambition of turning it into a “modern progressive burger company”.

Despite initial reservations from investors, he managed to increase the value of McDonald’s shares by 60% over his first two years in charge.

Following his successful transformation of the restaurant chain in the UK market, Easterbrook was tasked with updating the company’s brand.

He achieved this by following consumer demand for healthier options and turning away from the battery farm eggs, frozen beef and antibiotic-treated chicken, which the business had previously relied on.

Easterbrook was also responsible for bringing McDonald’s into the digital age, introducing touchscreen self-service kiosks and mobile payments to the company’s restaurants.

Increased competition for its drive-thru business from delivery start-ups saw the company successfully partner with Uber Eats and other delivery options such as Doordash in the US.

However, Easterbrook continued to receive scrutiny over the disparity between his $15.9m pay packet and the median employee salary of $7,473 in 2018.

A series of strikes were staged under his leadership, including a 2018 walk-out in the UK over zero-hours contracts and low pay, and a 2019 strike in the US over the company’s inadequate response to multiple sexual harassment charges and lawsuits filed by workers.

In what proved to be his final quarterly earnings calls, Easterbrook celebrated a 5.9% increase in global comparable sales.

He added: “Across every country function and level in our system, we’re seeing improving discipline and robust levels of execution that are guided by our Velocity Growth Plan.

“Performance that is punctuated by culture that is embracing and leveraging innovation across every facet of our business.”

Why was Steve Easterbrook fired?

Like many US companies, McDonald’s prohibits any manager from having a romantic interest with a member of staff due to a possible conflict of interest.

Easterbrook will be replaced by Chris Kempczinski, who will become president, CEO and a member of the board.

On succeeding Easterbrook, Kempczinski said: “Steve brought me into McDonald’s and he was a patient and helpful mentor.

“I am energised by this challenge and look forward to guiding McDonald’s continued success.”