Xavier Collins has experience of being there at the early stages of some of the biggest companies in the world, including Uber and Deliveroo. He has also been giving advice to new start-ups at the Workable Summer School 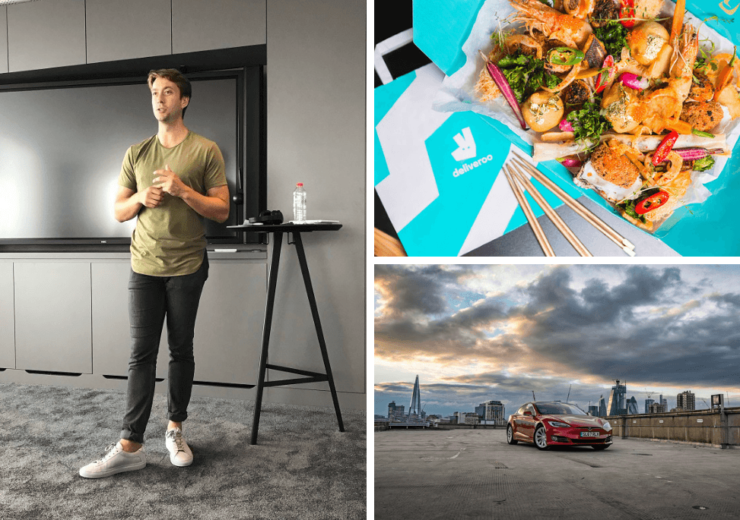 Xavier Collins gave advice to prospective founders based on his own experiences with Deliveroo, Turo and Uber

While there’s no definitive guide to help create a world-leading business, budding entrepreneurs can take away powerful lessons from Xavier Collins – a man whose CV includes nurturing the likes of Deliveroo, Uber and Turo through their fledgling years. Here Xavier shares seven lessons to help spot the next big disruptor coming your way — and how to make it fly…

Xavier Collins puts his experience of working with some of the world’s most successful start-ups down to luck. Good fortune aside, the 28-year-old certainly has a knack for securing jobs at companies just before they hit the upward trajectory.

From handing out flyers for Uber in Australia, when the concept of getting into a stranger’s car still seemed crazy, to helping drive Deliveroo’s expansion across the UK, Collins clearly has a keen eye for spotting the next big disruptor.

“Ultimately I look for start-ups that are solving a real problem that people are experiencing in the world right now,” he says.

His current role, as UK managing director of car rental platform Turo, has seen him join yet another sharing economy platform at the start of its global expansion.

Speaking at the Workable Summer School for Start-Ups, Collins shared seven key pieces if advice for aspiring entrepreneurs looking to disrupt the industry.

I cut my teeth handing out flyers for Uber, so I developed that mentality that you just have to do what you have to do.

A common mistake is people trying to architect the perfect solution before they even know if it fits the market.

The reality is, you have to do unscalable things until you are scalable because a business needs to be jump-started.

I think Airbnb is the perfect example. The Airbnb founders realised very early on that getting people to rent out an asset that they care about is an experiential curve.

They needed to build trust and transparency, which is a very hard thing to do, so they personally flew to New York and took professional photography of the first homes that they put on the Airbnb platform.

Obviously, that is not a scalable solution. It does not make sense for the founders of Airbnb to fly across the country to personally shake the hand of every host.

But having professional photography boosted trust and made the site look legitimate.

Similarly, when we launched Turo in the UK, we hired freelance photographers to go around and take professional shots of their car for free.

It cost £100 per shoot, but we wanted to invest in that because we wanted our app to look great.

Now we’re in the process of building an overlay on the app, so when an owner is listing their car, it gives them advice on how to take a good photo in the app.

At Deliveroo, I was responsible for growing in new markets.

I saw it as an easy win to pitch to university students and I thought they’d be a great target market for the business.

Rather than splash out on a big university campaign, I figured out that we could rent a Land Rover for a similar price to the cost of a single fresher’s event, wrap it in Deliveroo branding and tour the UK’s universities.

We could then park for free just outside the campus and hand out free food.

I only got one police warning at Southampton University and one uni even offered us a prime parking spot for free, because they thought we were part of the event.

When you’re in an early stage business, you have to think about the quick and easy ways you can do unscalable things to get the project going.

That puts a huge amount of strain on a business. Every single system had to be reinvented every six months because it would start breaking.

The best people I ever worked with would see something that was an annoyance at the time and be able to predict it would be a major problem a few months down the line and fix it immediately.

Once you get to ten-times the size it can sometimes be too hard to change that problem.

This was a mistake we made at Deliveroo.

We used to monitor every order that was happening in real time.

Imagine every single order that’s going on in London right now – which realistically would be thousands — on a single screen.

If an order was late or something was going wrong, the order would flash red — a bit like an air traffic control.

On a rainy lunchtime when riders haven’t shown up and things are going wrong you could be looking at a huge screen of red orders.

At the start it was manageable because there would only be about 20 orders on the screen at one time.

When we started getting 10,000 orders it was extremely complex and it wasn’t clear what the red flash meant.

After years, someone said: “Why do you need to show every order? If it’s working fine you don’t need to see it.”

It flipped the entire problem on its head and made things so much easier to manage. Always favour simplicity.

One of the biggest problems or challenges a founder will face is where do you invest your time.

Time spent on building technical solutions that don’t address a real customer issue can be a critical waste of time.

As a founder or entrepreneur, you often think you have great insight into what you need to build and go ahead with it without consulting your customers.

If you’re an early stage business, you should be speaking to three customers a day to find out what they want.

We had this issue with Turo.

There’s a company in London that specialises in delivering vehicles and we thought it would get rid of the headache of having to walk to a car you’ve ordered on the app.

We wanted to try and promote it as much as possible because it helps to increase orders and not many car owners have time to drop off their vehicle.

It was a great idea in theory so someone went away and tried to build app integration for a service we hadn’t even tested.

When you actually go and talk to owners, you find out that people weren’t very interested and thought it was too expensive.

We were close to investing a lot of time into a service that made sense in our minds but didn’t resonate with users.

Start-up lesson 4: The team is what matters most

It can be particularly hard at an early stage because you won’t have the pulling power of a Google or Facebook, but finding the right people can make all the difference.

One of the biggest mistakes I’ve made is investing too long in people who aren’t right for the role.

I have one question when hiring people: “What motivates you?”

What I look for at an early stage is people who are motivated by impact — it’s something that really resonated with me.

What is it that excites them and why are they getting out of bed in the morning to come and work for this company?

If they want to feel responsible and accountable for adding value to a business, then that’s a good fit for a start-up.

You want someone who can be trusted to solve problems.

Start-up lesson 5: Your role should change every six months

As a business grows, your role should be changing every six months.

The Turo team started with me and one other guy and it’s now up to 13 people.

Initially, every decision would be made between two of us, but now decisions are made every day — and often we aren’t even aware of them.

You should feel confident that you can pass on your jobs to new people because that’s how you grow.

Creating a good product comes down to three things: Price, selection and service.

Price doesn’t mean the cheapest — if you compete on price, you’re just going to have a race to the bottom.

What price means is, be good value for money.

People also care about choice, so selection is important.

Amazon started off as a book store and eventually became the ‘everything store’.

At Deliveroo the choice is restaurants.

We deliberated over whether to introduce KFC to the app and we had arguments because the founder of Deliveroo Will Shu thought it should be a space for premium restaurants.

But, when we introduced it on the platform, it blew up because people like selection.

Amazon Prime is a great example, it was deeply unprofitable for a long time and looked like a crazy business decision.

But Amazon did it because they knew people would want stuff delivered in a matter of hours and would pay good money for it.

Start-up lesson 7: Do what you love

Shu founded Deliveroo six years ago and he rode a scooter around every weekend for the first year and a half dropping off takeaways.

If he didn’t love the project he probably wouldn’t have invested the time.

If you do what you love and you’re passionate about it, you’ll make it a success.