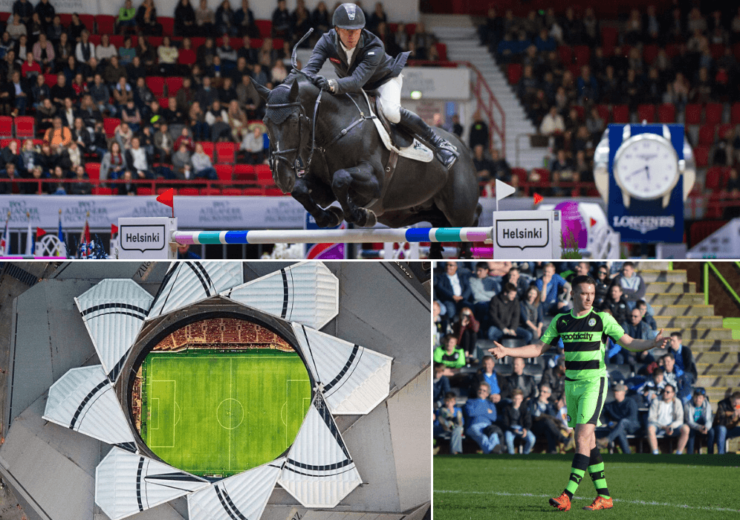 Clockwise from top: The Helsinki International Horse Show, Forest Green Rovers and Mercedes-Benz Stadium are all examples of sports organisations and venues leading the fight against climate change

As one of the world’s favourite past times, sport is in a privileged position to lead the charge in fighting climate change.

An estimated 3.5 billion people – almost half the 7.7 billion global population – could be classed as fans of football alone, spanning Europe, the Americas, Asia and Africa in particular.

With 2020 looking like a big year for sport – the Olympics, UEFA Euro 2020 and Super Bowl among the key upcoming events – it looks like an ideal time to set an example in sustainability.

In December 2018, the UN established the Sports for Climate Action Framework to rally sports organisations, teams, athletes and fans in a concerted attempt to raise climate awareness and inspire action to meet the Paris Agreement goals.

Martin Frick, senior director of the UN Framework Convention on Climate Change (UNFCCC), said recently that sport offers “the possibility of reaching people on an emotional basis, where they are, about something they care about, and really transport this message”.

With this in mind, we look at some of the ways in which sports organisations are stepping up their efforts to tackle climate change.

Playing in front of average crowds around the 2,700-mark in League Two, the fourth tier of English football, Forest Green Rovers is a relatively unremarkable club on the face of it.

But it has built a reputation as the “world’s greenest football club” after becoming the first professional football team to achieve carbon-neutral certification from the UN.

The Gloucestershire-based side’s New Lawn stadium is powered completely by renewable energy, with a quarter of the electricity generated by rooftop solar panels.

It also recycles rain water and the pitch is maintained by a solar-powered robot lawnmower. The grass is free of pesticides and herbicides.

Forest Green, endorsed by the Vegan Society due to their meat-free policy, collected the momentum for change award at the UN’s COP24 climate change conference in 2018.

And they aren’t stopping there, with plans approved in December 2019 for a new wooden stadium located within parkland – aptly named Eco Park.

The existing stadium, which opened in 2006, will be demolished and replaced by 80 zero-carbon affordable homes.

While Forest Green are ahead of the pack in the sustainability league, Ajax’s Johan Cruyff Arena in Amsterdam replaced its 53,000 seats – which were sold as souvenirs or recycled – with 100% recycled plastic, including 10% recovered from the oceans.

Gas-guzzling supercars, tens of thousands of air miles and huge energy-intensive factories mean each Formula 1 race emits 147 million pounds of carbon dioxide, according to an estimation by CleanTechnica.

The sport had taken some steps to move towards a cleaner future by replacing the high-emitting V10 engines with a new powertrain hybrid engine that’s said to be about 50% more efficient.

But it has been accused of “greenwashing” and climate-consciousness will now be a central pillar of the sport after the FIA governing body announced a sustainability plan in November 2019 to have a net-zero carbon footprint by 2030.

Initiatives will also include action to ensure F1 moves to “ultra-efficient” logistics and travel, with 100% renewably-powered offices, factories and other facilities.

By 2025, the FIA wants to ensure all events are sustainable by using sustainable materials, eliminating single-use plastic bags and reusing, recycling or composting all waste.

Fans will be given incentives and tools to travel to races in a greener way, while local businesses and causes will have greater opportunities to get involved.

Given that many innovations in aerodynamics, safety, navigation, energy recovery and composite materials have been adopted by the road car and other industries, the FIA believes it could now lead the way for making the automotive industry zero-carbon.

As the biggest sports tournament on the planet, the Olympic Games is in a privileged position to influence the wider industry’s green transition.

Organisers for Tokyo 2020 have developed a sustainability concept titled “Be better, together” that outlines five social and environmental goals – including aims to move “towards zero carbon” and achieve “zero wasting”.

This involves using 100% renewable electricity to power competition venues, media centres and the athletes’ village – which is built from locally-sourced wood, with beds made partially from recyclable cardboard – as well as event vehicles powered by hydrogen fuel cells and promoting public transport for fans.

In preparation for the Games, there has been an emphasis on using existing venues to limit the environmental load that comes with constructing stadiums – although there have been accusations that wood from threatened south-east Asian rainforests has been used to build some stadiums.

When it comes to resource management, 99% of everything used at the Olympics will be reused or recycled, while the aim is to reuse or recycle 65% of waste generated.

All water, other than for drinking, will either be rainwater or recycled.

And in making the medals that will be handed out to the best athletes in the world, almost 80,000 tonnes of materials from 6.2 million mobile phones and other electronics have been recycled.

Meanwhile, the Olympic torch is made from aluminium waste, the podiums from recycled household and marine plastic waste, and athletes’ uniforms will also feature recycled plastic.

The culmination of the NFL season has made green strides in recent years. During the 2018 showpiece at the US Bank Stadium in Minneapolis, all food was served in compostable containers.

Waste that couldn’t be recycled was sent to a waste-to-energy plant that generates steam to heat buildings in downtown Minneapolis.

In total, 91% of the waste – amounting to 63 tonnes – was recycled, reused or recycled.

The 2019 Super Bowl was held at the Mercedes-Benz Stadium, which is the first professional sports ground in the US to achieve Leadership in Energy and Environmental Design (LEED) platinum status, a globally-recognised green building rating.

The $1.6bn, multi-purpose arena, which has a 75,000 capacity and is mainly used as the home of the Atlanta Falcons NFL side, uses about 29% less energy and 47% less water than a typical stadium of a similar size.

It features 4,000 solar panels that can power 10 Falcons games or 13 Atlanta United matches.

Meanwhile, Miami Dolphins announced a plan to phase out 99.4% of single-use plastics by this year at its Hard Rock Stadium, which will play host to the 2020 Super Bowl.

This will eliminate more than 2.8 million plastic items annually, including cups, bottles, stirrers and spoons.

The venue claims it could even host the Super Bowl with the lowest ever carbon footprint, given that it already actively composts waste, donates food to local groups and uses waterless urinals, energy-efficient LED lighting, mobile tickets and contactless payments.

While not quite as big a spectacle as the other events on this list, the Helsinki International Horse Show has been one of the most innovative when it comes to sustainability.

More than 135 tonnes of manure collected from participating horses was used to generate 150 megawatt-hours (MWh) of electricity by stable-to-energy supplier Fortum HorsePower.

Other green initiatives include using electric vehicles in the arena and stable area, partially replacing a shuttle service with bicycles and favouring local food ingredients.

As part of a zero waste theme in 2019, water stations were installed for spectators who were encouraged to bring their own bottles, recycling was increased and more recycled materials were bought.