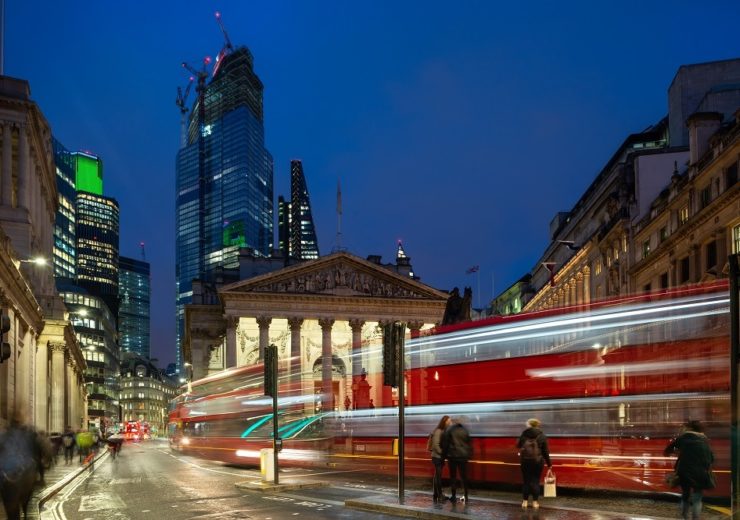 About 450,000 people are based in the City of London during the busiest times

Dating back to Roman times, the City of London is the historic heart of the UK capital but it’s now leading the way for energy efficiency through its smart street lighting project. Dan Robinson is taken on a tour of the Square Mile business district.

It’s one of the most iconic buildings in London but at night, when St Paul’s Cathedral is lit up all kinds of different shades, the glowing white dome that rests like a crown really does glow amid the skyscrapers that loom over it.

There can’t be many greater sights in the UK capital than when approaching the 17th century church from the Millennium Bridge.

Peter’s Hill, a walkway connecting the River Thames crossing and the 365ft-high St Paul’s, helps to create the dramatic scene with a series of lanterns pointing down on the path to create a warm feel on winter evenings.

It’s all about creating an attractive “sense of place” within the City of London – the historic, single square-mile local government area that accommodates one of the largest financial hubs in the world.

As the end-of-day rush hour begins in the City in late November darkness, a lighting engineer for the local authority dims the Peter’s Hill lights – which include lampposts, illuminated handrails and bulbs fitted into steps – from about 60% brightness to 10%.

No one appears to take notice that it just got ever so slightly darker.

“It’s an iconic location with hundreds of thousands of people walking through here every day so we’ve played around with the lights to get the best feel”, says Giles Radford, highways manager in the City of London’s built environment department.

“We used to have a strong white light because it’s a big space and we thought we needed to make it very bright.

“But we can dim them down to 10% and no one really notices.”

What is the City of London’s smart street lighting project?

It’s not just about setting the right ambience for an area that’s growing in importance as a visitor attraction to rival other London districts like Westminster, Trafalgar Square and Buckingham Palace with a rising number of restaurants, bars and museums.

Crucially, by switching to LED lightbulbs and a central management system (CMS) that uses algorithms to automate when they switch on and off as well as the brightness, it can save energy and money.

The City of London says its smart street lighting project – which involves installing 12,000 lights between 2018 and 2020, already delivering 60% energy savings – is “ground-breaking” and a central pillar in creating a “smart city”.

An oft-used buzzword, the concept is defined by networking hardware giant Cisco as a city that adopts “scalable solutions that take advantage of information and communications technology to increase efficiencies, reduce costs and enhance quality of life”.

For Radford, he has been keen to use the street lighting to improve the lives of the 450,000 people who spend their time in the City during the busiest times, as well as the 9,400 permanent residents.

But as the local authority looks to make cost savings, like most councils in the UK, his department has also been tasked with finding new ways of reducing energy consumption.

Much of the street lighting stock was more than 30 years old and reaching the end of its useful life when Radford joined six years ago, so he has overseen an overhaul of the entire lighting system that embraces new internet of things (IoT) technologies.

He says: “Four or five years ago, we weren’t in a good place. We had ageing stock, unmetered supplies, rising energy costs and a carbon tax brought in by the government.

“Historically, we had a system called Cyclo, which just sent a message to turn the lights on and off.

“This system was state-of-the-art when it first came in but 20 years on, it became unsupported by [South East of England distribution network operator] UK Power Networks.

“If that wasn’t bad enough, we had internal pressure to make savings, including energy, so we had to do something new.”

His team have fitted new LED bulbs – which are more efficient than traditional incandescent light bulbs and particularly effective for spotlights or dimming – across its streets, road signs, bridges and tunnels, fountains, irrigation systems, floodlighting, and festive lights.

Eventually, there will be 15,000 lanterns – many of which have a heritage design – controlled by a CMS that sets brightness and colour temperatures to various levels depending on location, time and other data that shows aspects such as when it’s busiest.

Although much of it is automated, a team of electrical engineers can also intervene to make adjustments and are

Radford explains: “We have a profile where, when people leave work, it’s bright until midnight. Then it’s dimmed until the morning.

“We can specify each street rather than just having a blanket rule for the whole Square Mile. We can look at the data and say ‘this isn’t a well-used road based on our analytics so we can turn down the lights compared to another area that’s busy’.”

IoT also comes into play as the LED lights are securely connected with each other to ensure they are in sync, as well as linked up to other sensors on a smart city network.

By communicating with traffic signals, noise and pollution sensors, parking detection, sewage level monitoring and waste sensors, the smart lighting control system is part of an ecosystem in which City of London bosses can measure just about everything that’s going on in their public realms to identify sticking points and create solutions.

The new CMS brings together 15 areas previously controlled by the old Cyclo system on to a single platform to give complete coverage.

It’s only running at about 10% to 15% capacity, says Radford, meaning it has “massive scope for the future” should the authority wish to pursue new smart city ventures as technology opens up greater possibilities.

A fairly unique challenge for the City is the blend of modern skyscrapers and medieval streetscape.

Its history, which stretches back to 50AD, is visible even among huge towers with comical names like The Gherkin, Walkie Talkie and The Cheesegrater.

Remains of the old Roman wall can be spotted around the Square Mile, while it’s not unusual to find buildings that are at least 500 years old with thick walls – including the City’s headquarters, the 1411-opened Guildhall, and its oldest church dating back to 675AD, All Hallows by the Tower.

“We’ve got those narrow streets but also the polar opposite a few metres away with skyscrapers,” says Radford.

Such physical barriers pose all kinds of headaches when it comes to connecting smart devices, but the City has found a way to overcome these by implementing a system designed by energy management company Itron and smart city software provider Urban Control.

Itron is a key member of the Wi-SUN Alliance – a worldwide non-profit association of more than 250 companies that aims to create a global standard for interoperable wireless communications used in smart cities, smart grids and other large-scale IoT applications.

Wi-SUN, capable of connecting IoT-enabled street lights several miles apart, is billed as the large-scale equivalent of Wi-Fi – which doesn’t work in this domain because its signal only has a short reach.

Itron’s EMEA director for smart cities Brian McGuigan has worked on similar schemes in cities like Copenhagen and Glasgow.

He says: “In a telco network, there’s generally an acceptance that any device will only last for three to five years but the street lights are expected to last at least 20 years, so cities are looking for a different level of commitment for how long the network connectivity will be there.

“Wi-SUN provides this but it’s also good for achieving 99.9% reliability in hard-to-reach areas like in the City of London where there are narrow streets with very thick walls.”

Benefits of smart city street lighting – and the future

When the City consulted with businesses and residents, one of the questions was about which elements of lighting were most important to them.

Safety, culture and security all scored highly but the most important factor was, to the surprise of many at the authority, sustainability came out on top after being highlighted by 27% of respondents.

Radford is pleased with the estimated 60% reduction in energy consumption already achieved by the City’s smart lighting project.

But his expectations are bigger, to such an extent that when asked if the IoT technology could enable the authority to feed surplus electricity back to the grid in a similar manner as electric vehicles, he admits there probably wouldn’t be enough leftover energy to make it worthwhile.

“For cities, street lighting is usually the biggest item of their energy bill – maybe 50% of it,” he says.

“But we can chop that by at least half with LEDs and then the controls can take another 30% off.”

Ultimately, the lighting strategy aims to deliver a “creative, holistic and smart approach in which light and darkness are better balanced to meet both a functional and aesthetic need”.

The first steps have been made but there are hopes to get businesses involved too – in particular, asking chain shops along Cheapside to dim their shopfronts – as well as give the City of London Police access to its smart lighting controls to improve safety at night.

Radford quotes theatrical lighting pioneer Jean Rosenthal when he says the most “successful and brilliant work of a lighting designer is usually the least noticeable”.

It’s something that seems to have been achieved in the walkway leading to St Paul’s, as he adds: “It’s making us think differently about how we light our streets. No light doesn’t have to mean complete darkness.

“But we can use light to reduce road danger, crime and disorder, as well as add to tourism and events by making it a nice place to be because for five months of the year, we’re in darkness.

“The City has changed – it’s not just about business now and we want people to stay here after work. We’re building the aesthetics and it all comes together to build a sense of place.

“This has given us a digital platform for moving forward and our next journey will go to the next level.”