After hosting the business podcast Secret Leaders for three years and interviewing leading business figures, Dan Murray-Serter has picked up enough tips to start his own company, he tells Sam Forsdick 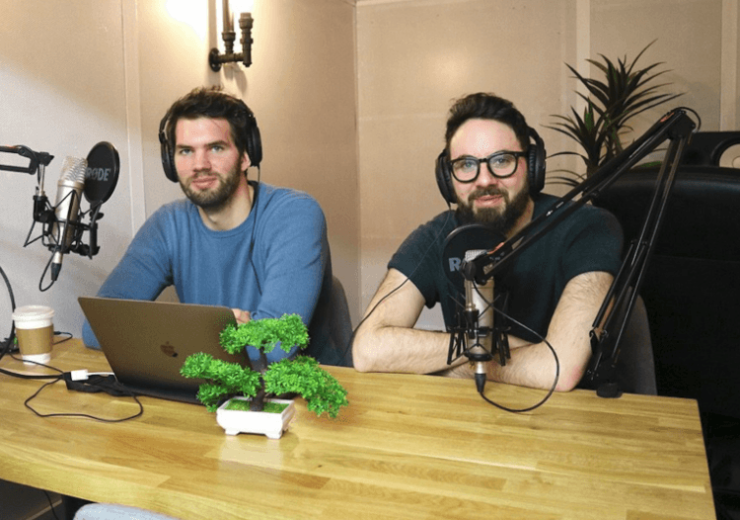 Fronting a podcast might not be the most obvious route into starting a new company but for one entrepreneur, hosting Secret Leaders gave him the business education required to make him confident of success in his latest venture.

Dan Murray-Serter runs Dawn – a nutrition supplement seller, advice app and support network – alongside his role as presenter of the podcast, which was downloaded 25,000 times in its first series alone without any marketing.

What is the Secret Leaders podcast?

He was inspired to set up the show in 2017 after meeting producer Rich Martell in Stockholm.

Dan had been interviewing different founders at private events in front of audiences of 30 to 40 people.

The 32-year-old claims that doing the interviews taught him “more than any book I’d read” as he learned from “business people who wanted to be open and were willing to share their mistakes”.

When Rich heard one of Dan’s fireside discussions he was convinced that more people should be listening to them than the small group of people in the room and suggested starting a podcast.

“I didn’t think the interviewees would talk about a lot of this stuff quite so openly if we recorded them but we thought we’d still ask and try,” says Dan.

How Dan’s first start-up was a failure

Dan describes his first business venture as a “very fast and bumpy ride”.

The start-up, called Grabble, was dubbed the “Tinder of fashion”. The app allowed users to swipe right on items of clothing they liked and they’d then be notified when items went into sales.

Dan says the idea took off far quicker than he expected and it became the number one shopping app in the UK.

He looked to other entrepreneurs for advice, telling them: “I’m running this company and it’s taken off a lot more quickly than I was anticipating.

“I have to hire 15 people in the next week and I’ve only ever hired one person successfully at a time, what do I do?”

Asking those sort of questions was how he formed those relationships with various business leaders.

Dan ended up having to shut Grabble down because, despite being able to scale users and revenue, he struggled to make the app profitable.

He adds: “It was a meaningful brand and a good product but not a good business – it was fundamentally flawed.”

Dan acknowledges that running the Secret Leaders podcast and interviewing entrepreneurs taught him many new skills.

“The lesson that struck me the most is that you need to start with a reasonable profit margin so that you don’t end up bottoming out,” he says.

“I cringe talking about it now because it’s the first thing you learn at business school but I never went.”

In many ways, Secret Leaders gave Dan his business education and although many of the lessons were “often very basic”, they were ones he thinks “can easily be overlooked”.

Discussing some of the most insightful interviews on the podcast, Dan says: “Ali Parsa from Babylon was incredibly inspiring because of the size of his vision and what the company is planning to do to disrupt healthcare.

“Justine Roberts, of Mumsnet, was also fascinating. She talks about SWAT teams coming into her house at 4 o’clock in the morning, getting death threats every week and getting sued.

“Those are the kind of stories that make you reflect on your bad times and realise they’re nothing compared to that.

“Some of the guests really surprise you with the crazy stuff they had to go through.”

Other guests Dan would like to learn from but are yet to appear on Secret Leaders are Elon Musk, who he describes as “mental and amazing”, Eventbrite founder and CEO Julia Hartz and Natalie Massenet, of online designer fashion marketplace Net-a-Porter.

One quote in particular that has stuck with Dan since starting the podcast.

It came from British businesswoman Martha Lane-Fox, co-founder of holiday booking site Last Minute, and board member of Twitter and Chanel.

Referring to the next generation of female business leaders, she said: “You cannot be what you cannot see.”

Dan explains that many of the business podcasts are male-dominated and “ultimately, if all young female entrepreneurs can see are men, then how is that going to inspire them to become leaders as well?”

For that reason, Secret Leaders has a 50/50 male to female ratio for guests.

Dan adds: “Not only are there fewer female leaders but, in general, they say ‘no’ to a lot more press and media opportunities than men do.

“The men tend to have PR people that reach out to you and suggest their clients should come on the show.

“We have had to start turning down really great people that we’d love to interview purely on the basis that they’re men and we don’t have enough women to balance it.

“If you want to create a good representation for the next generation, and the current one, you have to make a more conscious effort.”

Returning to his own entrepreneurial experiences, Dan recently “dusted himself off” from his earlier disappointment and set up Dawn after learning from stories on the podcast.

Inspired by a Patrick Holford book called Optimum Nutrition for the Mind and his own experiences with short-term memory loss and depression, Dan decided to develop “nutrition products for the brain”.

It also comes with an app to help “provide simple bite-size tactics and tools from psychology to promote positive bursts of joy into your day”, as well as an online community that connects people interested in mindfulness.

He says: “I’d heard of mindfulness and optimising your mind-set but I’d never heard of eating your way out of a situation like that.

“The concept of using nutrition and supplements for your mind rather than for your body was of real interest.

“I reached out to the author and told him about my idea for a new company and, after some persistence, he agreed to come on board to help us design our products.

“We are designing really healthy products made from natural all-organic, vegan, eco-friendly ingredients.

“I couldn’t really be having a more interesting journey at the moment even though I’m doing something completely different from last time.”

Explaining how his newfound entrepreneurial spirit fits into his experience with podcasting, Dan adds: “I think a lot of that comes from the confidence gained from listening to some of the journeys of the guests.

“A lot of people don’t just have one career – many will start a business and take the lessons they learned from there and apply it to something new that they are fascinated by.

“The nicest part of it is that everything I learn from hosting these podcasts is something that listeners can learn from as well.”