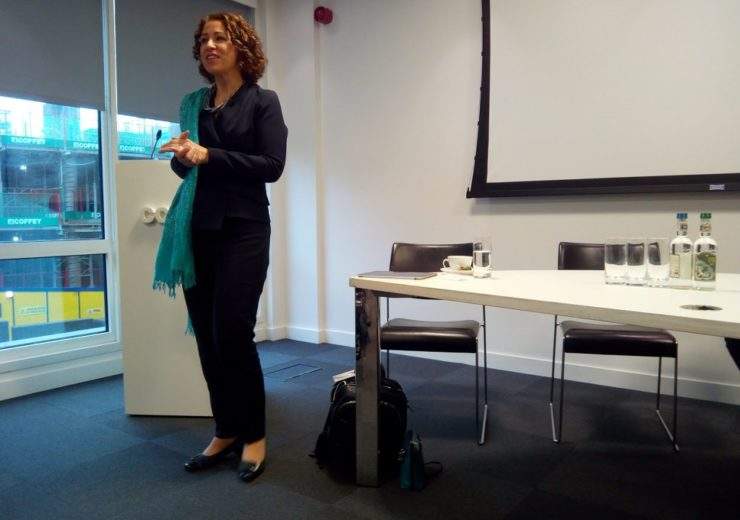 Sacha Romanovitch is the first woman to run a big City accountancy firm – and now she’s shared her insight on how to create a better operating system for a world steeped in capitalist philosophy.

Despite plans to step down from her role as CEO of Grant Thornton on 1 December, the mother-of-two says she believes in the work her company does to create a more equal society and has taken a number of measures to prove it, including capping her own salary.

Speaking at an event in London held by the Centre for Enterprise, Markets and Ethics today, she says: “I take a lot of inspiration from my eldest son, who is 15 and I routinely catch him on his computer looking for other places to live.

“He tells me there’s so much wrong with the world we live in and wonders why there isn’t more being done about it.

“I want to create a world where people like my son are filled with hope at the prospect of contributing to society in a meaningful way, and I think it can be done by encouraging collaboration rather than competition.

“Too often in our society we focus on winning, particularly by beating others, but if companies and governments worked together, I think we’d make a whole lot more progress.”

Sacha Romanovitch on collaboration over competition

At the top of her priority list, Sacha explains, are the greatest issues facing the world today.

Global dilemmas such as climate change and widespread inequality must be the focal point through which we devise solutions to smaller problems on a country, company and personal basis.

“One of the things that fundamentally needs to happen is the realisation that none of these global problems can be addressed in isolation,” she says.

“There’s no one agent that can come up with a complete solution for something like climate change.

“If you look back to the roots of capitalism, when it was a world of abundance and there seemed to be more than enough for everybody, it was a different sort of environment where people were operating.

“Whereas now, we really are in a place where people need to recognise actually that to address the global challenges it’s going to take people and organisations from all walks of life working together.”

On creating an organic ecosystem

Quick to substantiate her credentials as a business leader rather than an economist, Sacha presents her view for a more equal and universally beneficial form of capitalism from a philosophical standpoint.

“In terms of creating some sort of operating system 2.0 for capitalism, I think you have to explore it through the mindset by which we approach the issue rather than the economics,” she explains.

“Sometimes the mindset is neglected in these cases, and it’s fundamentally important.

“So when we look at the world and what defines success, we’re still operating in a world where we value GDP, and celebrate accumulation of wealth more than anything else.

“We really should be celebrating the contribution of wealth into worthwhile causes rather than wealth for its own sake – I think that would really shift the dial in society and what we deem to be important.

“When you look at GDP as a very binary measure, like in the UK, there’s a contradiction where on the surface it looks fine and yet you have 12% of people living in a very precarious financial position, so it’s not working as a measure.”

Sacha points to the UN’s sustainable development goals (SDGs) as a step in the right direction, proving the commitment from global leaders to work together in order to solve some of the world’s most pressing issues.

The SDGs include 17 objectives, which together lay out a roadmap for solving everything from gender equality and education insufficiency to mass poverty and global warming.

She says: “They set out some clear goals that shows the mix of things we need to pay attention to and get right in order to pass on a world in which we are happy for our children to live.

“Then you have to work out how to take this and apply it on a country level – this is one of the things we’ve been looking at at Grant Thornton.”

Sticking to her philosophical outlook, Sacha highlights the importance of belief systems in framing the ways in which people view the world, and the fact that they sometimes need to change.

She argues we currently operate accordingly to an extremely dated industrial model, where leaders make decisions and expect them to be carried out.

“I think we can agree this doesn’t really work very well – the metaphor I feel is much more interesting is an organic ecosystem,” she says.

“It works similar to a forest system, where you have all of these different elements and actually if you have a hard winter coming you don’t have all the tall trees telling everyone to go into a room and wait for them to come up with a solution.

“Instead every element of the forest is constantly sensing and responding and adapting, and that is how forests adapt over time to cope with all sorts of things that, if humans were in charge of the planning, probably wouldn’t have worked.

“We have an opportunity at this point in time, whether you voted remain or leave or whatever, to say what is the model of capitalism in the world that we need now so we do have a planet that we can pass on to our children.

“I put it to you that if we can actually redefine success and change the operating system and support and encourage our leader to lead in a different way, then we can create a better world and we can give our kids hope, rather than a reason for looking for somewhere else to live.”