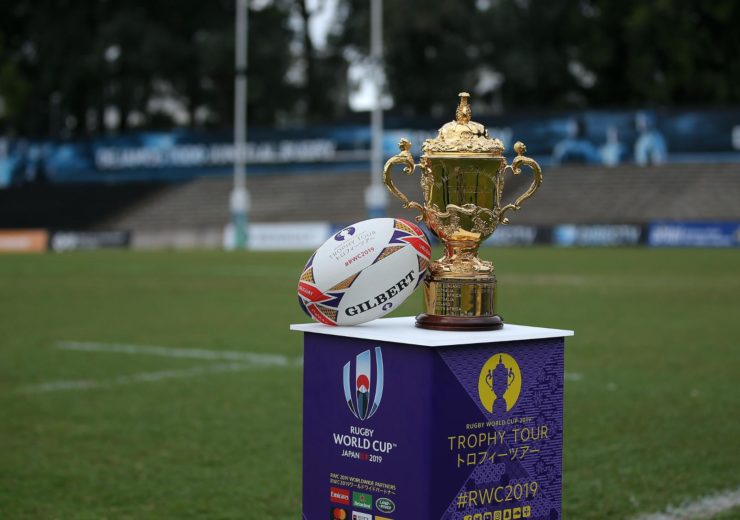 Owen Farrell, Kieran Read and Alun Wyn Jones will be among the captains hoping to lift the Rugby World Cup trophy in six weeks’ time – but sponsors will also be bidding to score a few conversions from the sidelines.

The 2019 tournament kicks off in Japan on Friday (20 September) when the hosts take on Russia, with 20 teams competing to triumph in the ninth instalment – and first to be held in Asia.

Much like the expected gap in quality on the pitch – the likes of New Zealand, Australia and England will be enormous favourites to beat countries including Namibia, Uruguay and USA in their pools – brand recognition of the businesses promoting their services will vary wildly.

Headliners Mastercard, Emirates and Heineken are known throughout the world, while many fans will be seeing the logos of Secom, Toto and Taisei for the first time.

Here, we profile the Rugby World Cup (RWC) sponsors that will be on show, including a number of Japanese companies taking full advantage of a home tournament.

Dubai-based airline Emirates has been around since 1985 but has really propelled itself into the global public eye over the past 15 years.

It has long-held primary shirt sponsorship deals with football clubs Arsenal – which plays at the Emirates Stadium in London – Hamburger SV, Paris Saint-Germain, AC Milan and Real Madrid, while it was previously a FIFA partner before turning its back in 2015 following allegations of corruption and bribery.

The brand’s relationship with rugby has involved a title sponsorship of the Emirates Airline Dubai Rugby Sevens tournament and backing of the Cape Town Sevens.

Its support for the RWC kicked off in the France 2007 competition and has been a worldwide partner since 2011. At every international match, referees wear an Emirates-branded kit.

Emirates, which is owned by a sovereign wealth fund operated by the Dubai government, has a fleet size of 256 aircraft that fly to 161 destinations.

Dutch beer giant Heineken is no stranger to elite sport, with its red star adorning the pitchside advertising boards at UEFA Champions League games since 2005.

Rugby’s equivalent competition for the cream of the crop clubs, the European Rugby Champions Cup, was also known as the Heineken Cup from 2005 to 2014, before returning with the name again for the 2018-19 season.

Its partnership with the RWC began at South Africa 1995, with captains at this year’s tournament even contesting the “official Heineken coin toss” before each game.

Four-wheel drive specialist Land Rover is perhaps not one of the more prominent car brands when it comes to sports sponsorship.

But the UK luxury car maker, part of the Jaguar Land Rover multinational group, will have its green-and-white logo displayed across Japan’s stadiums for the RWC 2019.

Land Rover says it has played a role across all levels of the game by backing grassroots rugby, while it has also been involved in The Invictus Games, equestrian events and adventure – where it supports famous daredevils including Bear Grylls and Ben Saunders.

The UEFA Champions League, Major League Baseball and PGA Tour’s Arnold Palmer Invitational are among the elite sporting competitions that showcase Mastercard’s famous overlapping red and yellow circles – and now the RWC will join them.

The multinational financial services corporation is used across the world to process card payments made by consumers in shops, restaurants and virtually every single other type of business.

Its main rival is Visa and this competition has often spread to the promotional arena, with Mastercard suing FIFA after it handed a contract to back the World Cup to Visa in 2007. The dispute was settled out of court.

Mastercard has a key stake in the outcome of the RWC as it sponsors tournament favourites New Zealand alongside the competition itself.

When ranked by total assets, it is the third largest bank in France and the sixth largest in Europe – or 17th by market capitalisation.

Rugby has long been the main focus of sports sponsorship for the bank, whose history dates back to 1864.

It partnered with the French Rugby Federation to create the Trophée Société Générale – which crowned the third-best team in France every season in the 1980s and 1990s – and became one of the first official partners of the FFR after it was privatised in 1987.

Société Générale has supported rugby sevens since 2001 and backs a number of local rugby teams in Hong Kong and Sydney. It became a worldwide partner of the RWC in 2007.

Four years ago, it was responsible for transporting tournament and team equipment from around the world to England – and then across the country as players and staff travelled between stadiums.

It even has a team named after it in South Africa’s DHL Stormers.

As one of Japan’s most successful manufacturing exports, it’s no great surprise to see camera giant Canon as a Rugby World Cup sponsor.

Its campaign for the tournament involves the launch of a free viewpoint video system, which will be used in seven matches to offer post-match highlights with viewpoints and angles not possible with conventional cameras.

Canon says the technology – which requires multiple high-res cameras being placed around the ground and connected to a network – will create replays that “convey the thrill of such sports as rugby and delivers an experience that feels like being right on the field”.

The company will also run a host city photo spot project to “help everyone enjoy sightseeing along with watching the matches at the host cities by sharing the charms of the cities through photos” via a dedicated Instagram account and special websites.

Japanese company Toto, founded in 1917, is the world’s largest manufacturer of bathroom fixtures and fittings.

It is best known for developing the Washlet, a line of cleansing toilet seats with a water spray feature.

Ever since it was the inaugural security company in Japan when it launched in 1962, Secom has registered its fair share of firsts.

It now maintains contracts with a million corporations and 1.2 million households, with offices in 21 countries.

As part of its deal with World Rugby, Secom will support operations by providing security expertise.

The Japan Rugby Football Union, Sunwolves Super Rugby team and Top League have all partnered with the company too.

While many of the Rugby World Cup sponsors have been in place for some time now, Taisei is a new entrant to the party after signing up at the end of August.

The construction and civil engineering company, though, has taken on a bigger role in the tournament than most of the other brands filling up the advertising boards, having been involved in building various stadiums across the 12 host cities.

Billed as an industry leader and pioneer in sales support and staffing services, Hito-Communications has a track record in rugby sponsorship in Japan.

The company has sponsored the Sunwolves Super Rugby team since 2016 and was announced as a backer of the RWC last month.

Japanese multinational IT and electronics giant will mark its 120th year as an official Rugby World Cup sponsor.

It will also introduce innovative facial recognition technology to check reporters entering the Tokyo Stadium and International Stadium Yokohama during the tournament.

NEC is one of the more recognisable Japanese companies on display at the tournament, having been historically one of the world’s largest PC and semiconductor manufacturers.

The company is part of the Sumitomo Group, which can trace its roots back to 1615 and was originally famous for copper refining.

Mitsubishi Estate Co is one of the lesser-known parts of the 149-year-old Mitsubishi Group – which oversees numerous autonomous Japanese multinational companies across various industries.

Since being spun off from the main group in 1937, it has operated the real estate holdings of the parent company, particularly around the 120-hectare Marunouchi office district near Tokyo Station that’s home to 4,000 companies and 230,000 workers.

It has also developed a wide range of property-related businesses worldwide – including in the UK, US, China and Singapore – perhaps explaining why it is now stepping up to the global stage.

Taisho Pharmaceutical will advertise at the RWC under its energy drink brand Lipovitan D – marketed as Libogen and Livita in English-speaking countries.

The drink, which predates global market leader Red Bull having been released 25 years earlier in 1962, is sold across Asia in brown-coloured 100ml bottles and is said to alleviate physical and mental fatigue.

Lipovitan D is no stranger to the Japanese rugby game as it was a shirt sponsor for the national team until last year.