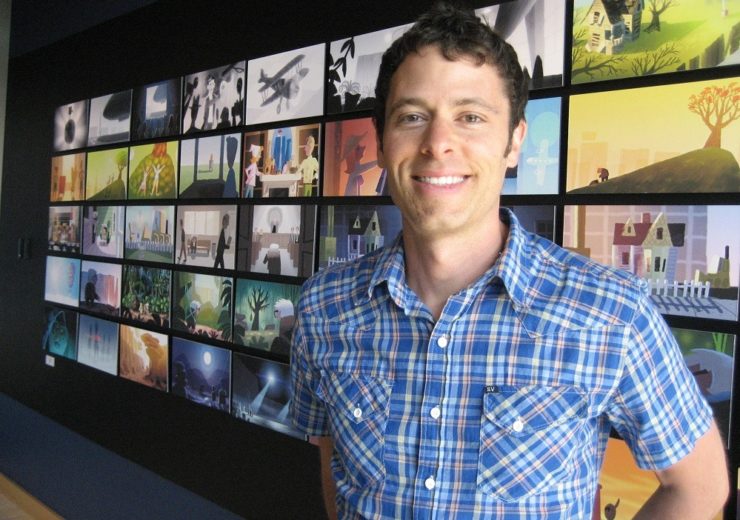 Matthew Luhn worked in the animation and story departments at Pixar for 23 years and is now a creative writing instructor and innovation speaker (Credit: nsb.com)

Whether it’s Toy Story, Up or Finding Nemo, every Pixar film has a familiar structure, says Matthew Luhn.

As the story consultant behind many of the animation movie studio’s biggest hits, he has always included a hero, struggle and triumph within the spine of the narrative.

And when it comes to pitching for a new business client or promoting a new product, Matthew believes companies can learn a lot from Pixar’s fantasy world.

“I want you to be inspired and to feel something,” he says in a keynote speech at the Gartner Data and Analytics Summit in London. “That’s what a good story does.

“And this isn’t just for a film or book – it’s for a great pitch, and telling people what your company is about or what your product can do.

“Using a story helps to make information more fun and memorable. Storytelling is about taking any kind of information, whether it’s a stack of plot points in a film or a three-minute pitch, and making it more magical.”

Who is Matthew Luhn? His career journey to Pixar and beyond

Matthew, whose parents owned a San Francisco toy store, was at Pixar for 23 years after briefly studying character animation at the California Institute of the Arts in Los Angeles and working on The Simpsons as the youngest animator on the TV series during its third season, aged 19.

He joined Pixar when it was a small independent studio with fewer than 80 people and was one of the first 12 animators for Toy Story, which became the highest-grossing film of 1995.

Later, he moved to the story team and his film credits include the first two Toy Story sequels, Monsters, Inc, Monsters University, Cars, Ratatouille, Up, Finding Nemo and Lou. He left Pixar in 2016.

Matthew, who has also worked as a creative writing instructor, children’s art teacher and keynote speaker, published a book titled The Best Story Wins: How to Leverage Hollywood Storytelling in Business and Beyond last year.

Matthew Luhn on the key narrative techniques in a Pixar film

In the first ten minutes of 2009 film Up, there is no dialogue as the scene is set through a montage of images anchored by music.

It also evokes opposing feelings of happiness and sadness when showing how its protagonist Carl Fredricksen and his wife Ellie’s lives progress.

Key moments include celebrating her pregnancy – only for her to suffer a miscarriage – and Carl arranging for their dream trip to visit Paradise Falls just before Ellie falls ill and dies at an old age.

These contrasting emotions trigger chemicals in the brain that have powerful effects.

Matthew explains: “When you’re talking about someone having a child, it creates dopamine, which focuses your attention and helps you connect better with the character on screen – or a speaker in a presentation.

“But when you have a sombre moment in a story, it creates oxytocin, which creates empathy. It’s a very powerful marketing tool because they both create trust.

“We live the juxtaposition of happy and sad moments, so when we see how the last image of this montage is him at a funeral, no matter how hungry you are or how much you need to pee, you’re going to stop watching because you want to know what’s going to happen to this man.

“That’s the power of a story.”

Matthew Luhn on the importance of storytelling in business

Matthew believes the best speakers use a similar “up and down” story arc in presentations to engage audiences.

One of the most famous proponents is Apple founder Steve Jobs, who didn’t just highlight the key specifications of the first iPhone when it was released in 2007 – but also showed the highs and lows of the journey in bringing it to market.

His key messages were that other handsets supposedly part of the smartphone category at the time weren’t actually “smart”, how the iPhone was the only mobile device truly connected to the internet, and how much easier swiping the screen with a finger was than using a stylus touch pen.

Matthew says: “He shared the ordinary world of a character’s life, then showed how it can be extraordinary with this product.”

A Stanford University experiment found that 5% of people recall a statistic after they have been shared in a presentation, while 63% remember a story.

“You can tell a story through a song, taste, smell or touch. It’s an experience and the best companies out there are creating a feeling, not just stuff.”

He claims that triggering these emotions in marketing will increase the likelihood of a consumer remembering a product by 22-times, while ensuring they feel “can’t live without it”.

“When you make a decision in life, it’s because someone impacted our emotions,” he adds.

“But the thing is, once you buy that product or watch that movie, if it’s not good then people aren’t going to come back.

“You need to be able to impact their decision with a story but when you rationalise it, they love the product as well.”

Good storytelling revolves around triggering emotions, believes Matthew, who highlights jeweller Tiffany & Co as an example in how it adopts robin egg blue in marketing materials and packaging.

He says: “Colour triggers your emotions. In Pixar, the use of red makes it an action film – think of The Incredibles.

“Some companies will use the same typeface as the Internal Revenue Service in the US and it pisses people off.”

Alongside his work as a keynote speaker, Matthew is employed by Adidas as a story consultant.

One of his first tasks was to help create an advertising campaign for women’s running shoes.

He realised there must be a hero, journey, struggle and goal to reach – while the subject must be changed by the product.

Kathrine Switzer, who became the first woman to run the Boston Marathon as a numbered entrant in 1967, became the hero of the campaign – released in 2017 and marking the 50-year anniversary.

“This is what Steve Jobs did,” Matthew adds. “He was great at telling a story around a product.

“He didn’t really create the computer – that was IBM. But he created the personal computer.

“He took the screen and moved it to the top, made the monitor look like a head, added more typefaces and fonts.

“You can use storytelling to personalise anything.”

In any story, Matthew says there are five key narrative techniques that should be applied – a hook, transformation within a character, connection to the audience, authenticity and structure.

The storyteller has eight seconds to grab the audience’s attention through creating an unusual or unexpected situation – often involving a sense of conflict or action.

“In The Incredibles, we show superheroes who are banned so people instantly want to know more about why this is.

“Or there might be shock value like a rat who wants to be a French chef in Ratatouille.

“When Steve Jobs unveiled the iPod, he started by saying ‘what if you could have 1,000 Sony Walkmans in your pocket?’”

How will a product change a person’s life? This is the main reason for buying something for many people and it’s why businesses must think carefully about the message they want to convey.

Matthew says: Great stories are about transformation. We show other people try it first because people don’t like change.

“We like to vicariously live through other characters. Maybe I should be less timid or braver like Harry Potter.

“Stories inspire us to change. It can be a testimony of how you worked with a company and had a great experience – that’s a change of who they were before and who they became.”

There are also cautionary tales like the character transformation of Walter White in TV series Breaking Bad, while the message from the fable The Boy Who Cried Wolf sticks with us because of the story.

Any story must be relatable to an audience so it should be crafted with them in mind down to the minutest details.

But some stories are aimed at everyone and carry universal themes as a result.

Matthew explains: “We don’t all connect to a rat but a rat who wants to be able to do the impossible is one we can engage with.

“The Toy Story series is all about toys fearing being abandoned, failing and not belonging. We can all connect to a desire for love, safety and happiness.

Don’t be clever – instead, focus on being vulnerable and honest, says Matthew.

“Rather than trying to sell this widget, think about how this widget will change your life,” he says.

“All the scripts at Pixar came from an element of truth. The tallest guy in the studio was really happy when his daughter turned 12, but then he realised how she was changing and that being happy all the time isn’t realistic.

“You need all the emotions and that’s where the story of Inside Out came from.”

But the theme should never be stated as the audience will take away more from working out the message on their own.

“Do such a good job when you’re delivering it that they understood it on their own and everyone comes to the same conclusion.”

The way in which a story is told is integral to its success – it can have the other four techniques but if the delivery method isn’t right, it could still fall flat.

Matthew says the best structures will have a set-up, conflict and pay-off – very simply a beginning, middle and end.

“This is how the world works – there’s a beginning, middle and end to the day, and in the cycle to our life.

“That’s why every single story for thousands of years has had a hero.

“Explain the problem that you’re setting out to solve. Describe how you’ve solved it. People don’t mind if you’ve had moments when you failed, just that you got up and made it work.

“Then end with the success. This is the answer.”