The hierarchical structure of corporate life ebbs and fl ows, but occasionally a new role rises through the ranks and gains a place at the C-suite table. When it comes to big business, chief people offi cers are part of the furniture, a role born out of a decade of stress and burnout culture. Put people before profi t – or so they say. So when did well-being become an employer’s responsibility and how do CPOs manage the work-life balance of staff across the board, especially when it comes to the thorny question of compensation? Nikki Peach hears from Arianna Huffi ngton, the former CEO at The Huffi ngton Post, about her own experience of burnout and how she’s working to help others avoid the same fate. 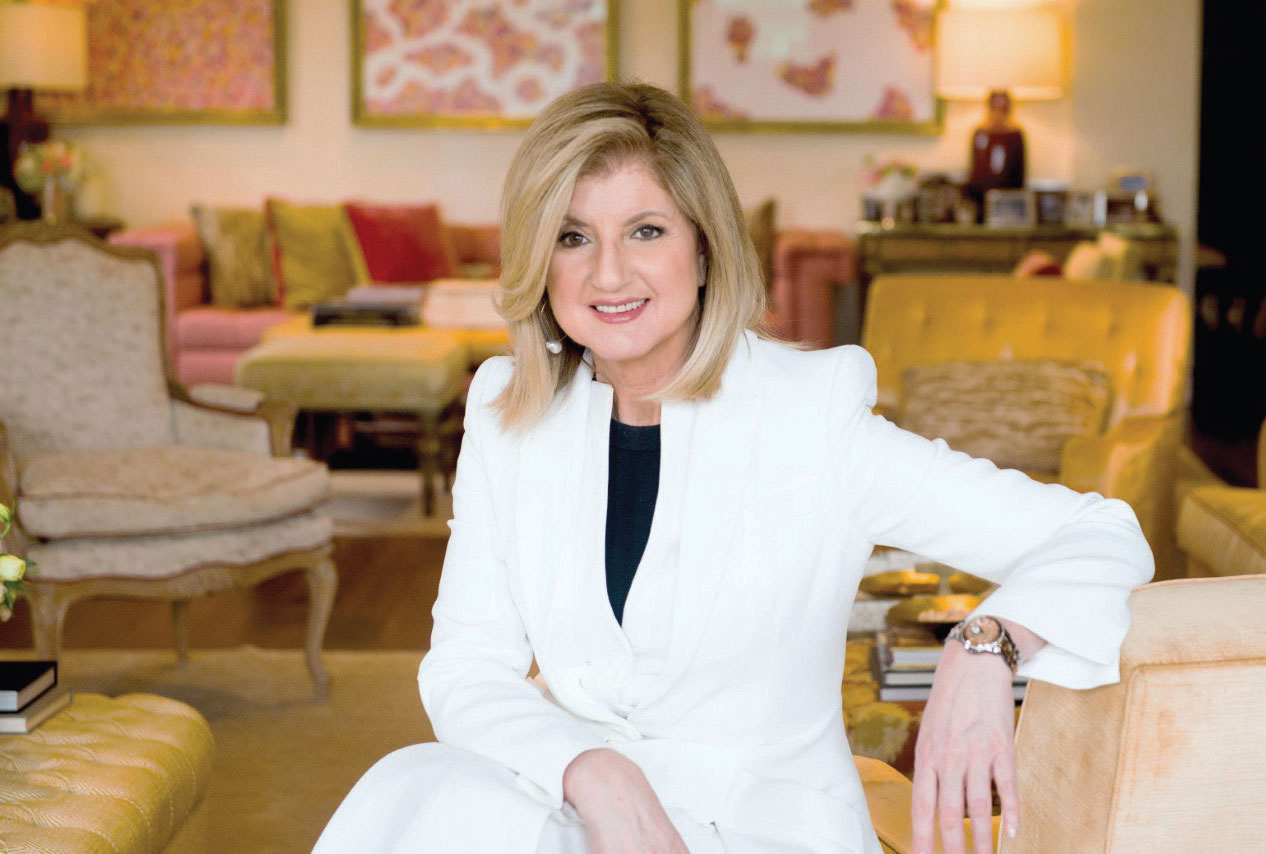 Finding anyone who didn’t find the past two years stressful would be a challenge, even in the most peaceful of working environments. A period overshadowed by a pandemic, supply chain crises, global recessions and war – the lives of everyday workers have been turned upside down. The bad news? Working life was on thin ice even before then. Burnout was defined and recognised by the WHO as a medical condition in 2019 and has been part of corporate life ever since.

There is, however, some good news – with businesses, including top executives, all starting to take notice. Chief people officers are corporate officers who oversee all aspects of human resource management and industrial relations, including policies, practices and operations. They are intended to bring about change for the benefit of employees – whether that’s balancing executive compensation with the financial concerns of junior staff, or arguing for broader compassionate leave parameters. While this may sound like another name for head of HR, the chief people officer is supposed to blend HR, marketing and operations to create a role that works in tandem with the CEO.

Arianna Huffington, cofounder of The Huffington Post and CEO of Thrive Global was diagnosed with burnout in 2007 after collapsing from exhaustion.

At the heart of this role is company culture, and at the heart of company culture is staff well-being. In 2007, while running The Huffington Post, a liberal news outlet that launched in 2005, Arianna Huffington collapsed from exhaustion, burnout and a lack of sleep. She broke her cheekbone on her desk as she fell. “After that, I became more and more passionate about the science on the connection between well-being and productivity,” she tells me. After writing two books on the subject, Huffington realised this wasn’t just a cautionary tale. It was a pandemic. “I wanted,” Huffington explains, “to go beyond just speaking out and raising awareness – I felt the need to turn this passion into something real and tangible that would begin to help people change their daily lives. So I founded Thrive Global in 2016.”

Thrive is a behaviour change tech company with the mission of changing the way we work and live. It achieves this by ending the collective delusion that burnout is the price we must pay for success. The company, for its part, has worked with chief people officers to tackle these problems – ones they can no longer afford to avoid. As Huffington explains: “Wellbeing is no longer seen as a perk or a soft, fuzzy benefit that’s nice-to-have. It’s increasingly seen for what it is: an essential strategy for success.” Thrive uses technology, such as its ‘Reset’ tool, to allow staff to course-correct and lower stress in 60 seconds.

This tool has been integrated in communications software like Microsoft Teams, Zoom and Slack, all staples in most companies. The platform is based on ‘microsteps’ – small, science-backed steps to build healthy habits like turning off your devices before bed or suggesting a walking meeting. “They’re too small to fail,” Huffington claims. “We combine our microsteps with science and storytelling to create a whole-human behaviour change system that will enhance every aspect of your physical and mental well-being, performance, resilience and relationships.”

Even in a technological age, that’s an ambitious claim. But Huffington assures me that a positive future depends on staff and technology working side by side. “Chief people officers are helping employers and employees navigate a new era together,” she says. This new era is set to be more collaborative than the top-down approach that came before it, emotional and reasonable remuneration priorities at every level.

That last point, in particular, is one that chief people officers are taking increasingly seriously. Consider software firm Yext, where chief people officer Brian Schipper argues that the kind of collaboration now expected of corporate high-flyers is inevitably harder for staff on lower incomes, especially those who may have become dependent on hybrid working. This focus on compensation makes sense in a broader sense too. With CEOs now earning 670 times more than their worst-paid colleagues, chief people officers are crucial to cutting the gap, especially given that 92% of workers in the lowest wage bracket have experienced burnout. Not that chief people officers can ignore paychecks at the top of the corporate chain either. With so much competition for talent, and many CEOs struggling with their own mental health challenges, it’s probably unsurprising that one 2019 survey found that the cost of turnover in executive positions can go up to an eyewatering 213%. 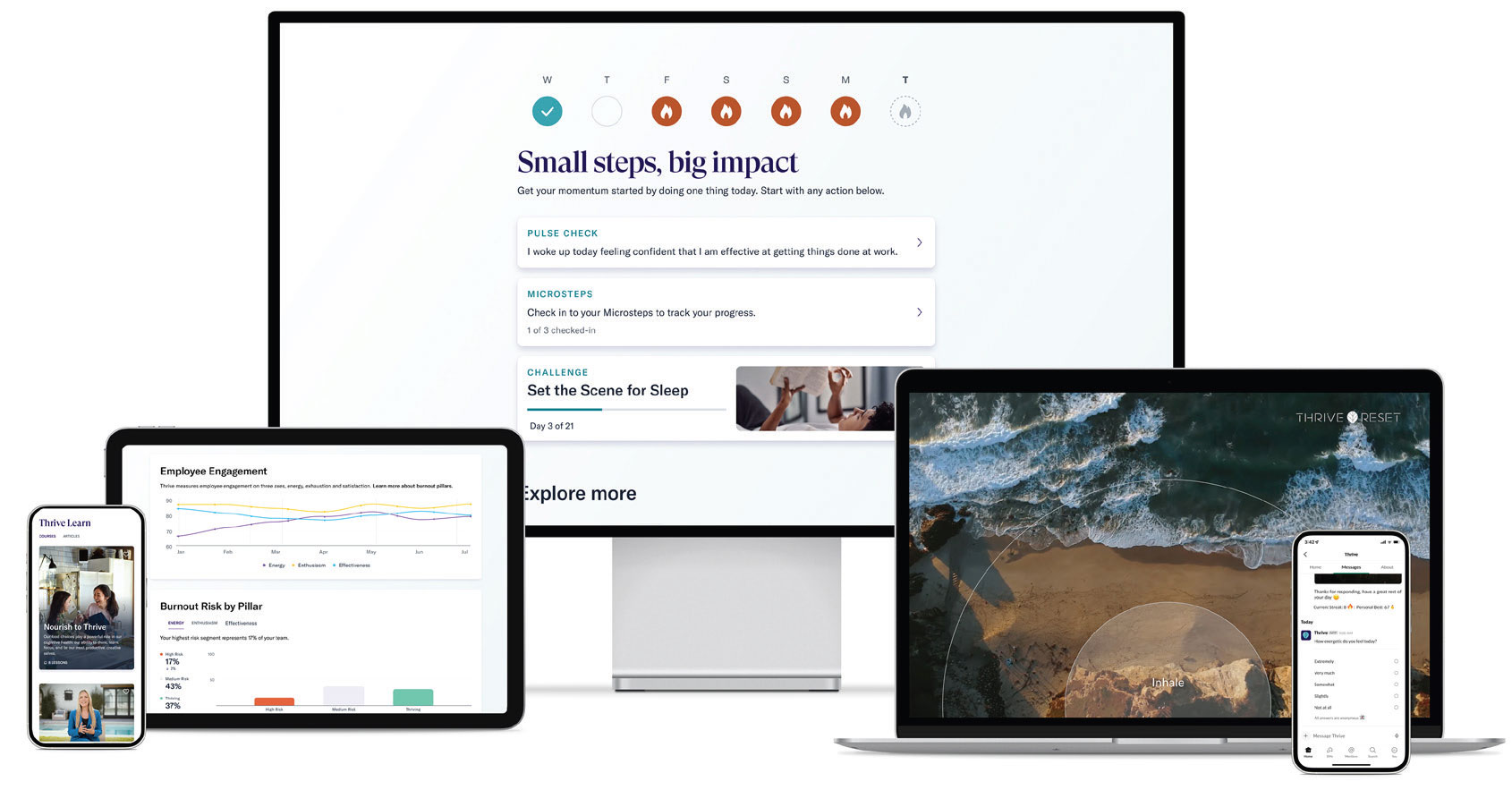 Thrive is a multi-platform health and well-being system that helps employees to destress and avoid work burnout.

Naturally, keeping executives supplied with a steady stream of generous paychecks is one way to prevent these upheavals, with chief people officers crucial to understanding what’s fair based on an individual’s experience and job type. More to the point, and just like their interactions across the company, this requires chief people officers to maintain good relations with their fellow executives, understanding their needs and how pay fits into their wider aims and aspirations.

Power to the people

To put it another way, understanding the complexities of executive compensation, to say nothing of keeping staff happy more broadly, isn’t straightforward. But given stress and burnout is common to practically every company, Huffington argues that these are challenges “common to nearly every company.” This is where chief people officers must shoulder the responsibility of ensuring that employee and employer well-being remain a top priority across the board – and don’t just take the form of a biscuit trolley and the odd away day. In the past, it was often the CEO and CFO leading the C-suite pack, and breaking potentially unwelcome news to employees, shareholders and other stakeholders. For Huffington, a distinctive feature of the pandemic has been to raise the profile of the chief people officer, who is often “visibly helping CEOs manage the present and lead their companies into the future”.2

Earlier this year, in fact, Thrive launched a mental health pledge in partnership with the Society for Human Resource Management (SHRM), with companies such as Barclays, Accenture and Adobe reaffirming their commitments to employee mental health in uncertain economic times. “The extraordinary response was just one more indicator of how mental health has moved from the margins to the centre of the workplace conversation,” Huffington argues, “with chief people officers leading the way.”

And if balancing executive compensation is certainly one part of this dynamic, so too is motivating chief people officers themselves. Considering the average salary for these particular positions can hit over £100,000 in the UK, indeed, you have to imagine they’re well-placed to shoulder this responsibility. Not that a bright future is necessarily guaranteed.

The Centre for Leadership in the Future of Work and Adecco collaborated for a research project exploring how management is changing. The report includes the views of 122 senior people management executives and its conclusions prove that the profession still faces a number of unresolved issues. Among other things, 86.9% of chief people officers believe that understanding data and people analytics will be a crucial competency for HR leaders over the next five years. That’s shadowed by the ever-present spectre of compensation, with another poll finding that almost a quarter of firms reported difficulties in attracting or retaining top management. It seems clear, in short, that chief people officers will need to use their authority to help improve the working lives of all their colleagues – from how much they’re paid downwards.

After working 18-hour days building The Huffington Post website, and enduring weeks of medical tests, doctors diagnosed the erstwhile CEO with exhaustion. Yet if her new venture certainly offers something of a solution, no one is claiming it can solve the problem alone. On the contrary – and with almost half of workers claiming that their employers don’t support them – it seems obvious that Huffington’s more straightforward mental health provisions must be coupled with more tangible changes too, not least when it comes to pay. For lower-level staff, that probably amounts to a heftier paycheck each month. But for executives, chief people officers should probably think more broadly about areas like shares and longer-term targets. Considering long-term stock options now often make up over 60% of total compensation packages, you have to imagine that’s precisely what they’re doing.

Albert Einstein said insanity is doing the same thing over and over and expecting different results. It shouldn’t take the CEO of The Huffington Post breaking her cheekbone or a deadly pandemic to spark conversations around staff well-being – but needs must. What happens next requires collective effort, with chief people officers at the helm everywhere from sick pay to remuneration.