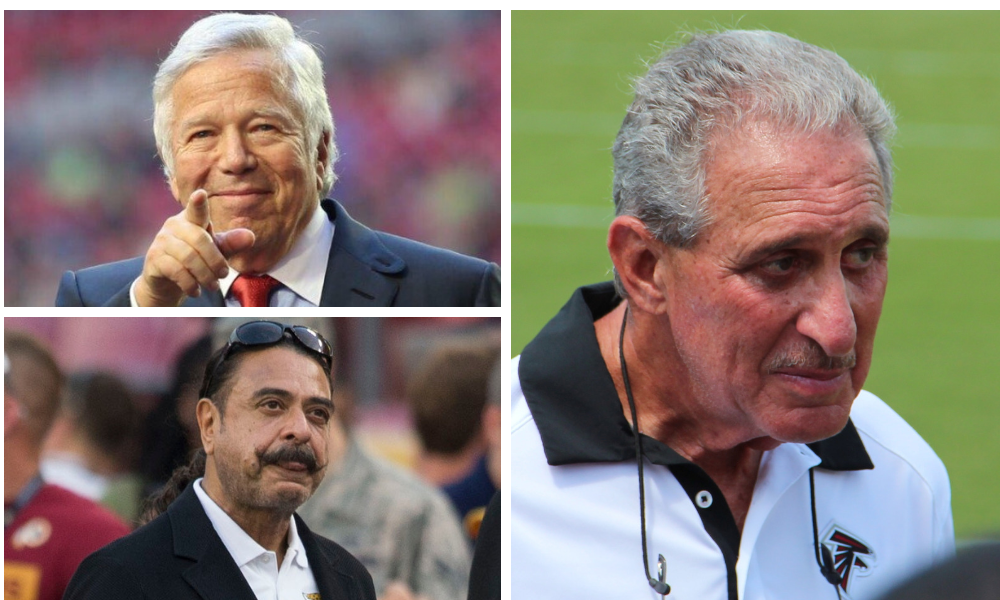 With the season of America’s professional football league starting today, the majority of the fans’ attention will be fixed on the players rather than the NFL franchise owners.

But the business moguls behind the teams set to square off between now and February boast plenty of reasons to take a closer look at how they’ve got to where they are.

Seattle Seahawks owner Paul Allen, for example, co-founded Microsoft along with Bill Gates, while Balitmore Ravens supremo Steve Bisciotti formed a staffing company in his basement, which later became the largest in the US – Allegis Group.

Neither of these teams made it into last year’s play-offs, however, so for this list we’ve taken a closer look at the entrepreneurs behind the 12 teams that did.

After climbing his way to the top, he bought the company before absorbing it into International Forest Products, a company he founded that has gone on to become one of the world’s largest suppliers of paper products.

The company is part of the 77-year-old’s private holding company The Kraft Group, which also controls his sports investments.

They include e-sports for competitive video gaming and mixed martial arts.

Terry and Kim Pegula, owners of the Buffalo Bills, reaped an estimated $6.5bn (£5bn) from the controversial rise of fracking, selling the drilling right and assets of their business East Resources one by one between 2010 and 2014.

The married couple then used this substantial cash injection to purchase the NHL’s Sabres in 2011, along with the New York state NFL team in 2014 when they outbid the likes of future president Donald Trump and rock star Jon Bon Jovi.

The organisation that runs their business interests now is Pegula Sports & Entertainment, which is headed up by Kim.

Arthur Blank recovered from an inauspicious start to his career when he was fired from a home improvement store, promptly founding The Home Depot in 1978.

Mr Blank, whose worth is estimated to be about $4.7bn (£3.6bn), also owns association football team Atlanta United, which shares the Mercedes-Benz Stadium with his NFL side.

Starting his career as a car salesman in New Orleans, Tom Benson went on to open several dealerships in the city before entering the banking sector.

He took sold his company Benson Financial to Norwest Banks for $440m (£340m) in 1996, which was later bought by Wells Fargo.

He also bought the New Orleans Saints for $70m (£54m) in 1985 before his eventual death earlier this year, which was reportedly caused by influenza.

His wife Gayle inherited his business empire and now owns the NFL team currently worth an estimated $2bn (£1.5bn).

Jerry Richardson is one of the few NFL franchise owners in history to have been a player himself, having played for the Baltimore Colts until 1959.

The 82-year-old used his earnings from playing for the team to enter the fast food industry, opening Hardee’s in 1961, which later went on to launch more than 500 more franchises.

He later founded a Hollywood production studio known as Chestnut Hill Productions, the releases of which you won’t see in many hall of fame lists – featuring flops like Angelina Jolie-starring Foxfire and Kathleen Turner’s VI Warshawski.

His grandson Art Rooney II now owns the NFL side after being president since 2003 and before then serving as general counsel.

The 65-year-old also acts as chairman of the NFL’s stadium committee, and serves on a number of other NFL boards, including the legislative committee, international committee and the digital and media committee.

In addition to sporting a moustache that would spark the envy of even the most hirsute of sultans, Shahid Khan also owns the Jacksonville Jaguars.

Pakistani-American Mr Khan, estimated to be worth about $7.6bn (£5.86bn), generated the majority of his wealth off the back of his Illinois-based car parts manufacturer Flex-N-Gate.

He also has a strong presence in the UK, owning Premier League football club Fulham since 2013 and featuring the Jaguars as part of the annual London-based NFL games.

In a bid to increase the NFL’s presence across the pond, Mr Khan recently made a £900m bid to the FA to buy the national stadium Wembley, which is currently under consideration.

Former owner of the Tennessee Titans, Bud Adams, died in 2014, after which his daughter Susie Adams Smith became the primary shareholder while her husband Tommy acted as CEO.

She is now selling her one-third stake in the side, however, and for the moment Mr Adams’ daughter Amy Adams Strunk has control of the Titans, which are currently valued at more than $2bn (£1.5bn).

She is one of the directors of KSA Industries, which owns the Titans as well as a handful of other energy and retail companies formerly owned by the late Mr Adams.

The Kansas City Chiefs were formed in 1963 and have been owned by the Hunt family ever since.

Clark Hunt – took over the team as chairman and CEO following the death of his father Lamar Hunt in 2006.

The 53-year-old has gathered a $2bn (£1.5bn) fortune off the back of his career as an analyst at Goldman Sachs and by acting as one of the founding investors in Major League Soccer.

He also sits on the NFL’s international committee and its executive committee.

Los Angeles Rams owner Stan Kroenke is one of the richest NFL team owners with an estimated wealth of $8.3bn (£6.5bn), which he earned primarily as a real estate developer.

He had a lot of success and reaped a lot of profit from developing Walmart stores in the US, which may or may not be related to the fact he was married to Ann Walton, an heiress of the retail conglomerate.

He also has a large stake in English Premier League football club Arsenal and has placed a bid to take effectively sole ownership.

Mr Kroenke first bought a stake in the Los Angeles Rams in 1995, before purchasing the team outright in 2010.

After returning the franchise from St Louis to LA in 2015, it is worth now estimated by Forbes to be about $3bn (£2.3bn) – more than twice what it was valued three years ago.

His business career has been far from smooth, however, as in 2014 a New Jersey judge ordered the Wilf family to pay $84.5m (£65.9m) after being convicted of a 1980s fraud scandal concerning two former business partners.