Mental health in the workplace is a trending topic right now, with celebrities Professor Green, Andrew Flintoff speaking alongside other media personalities on the subject at the BIBA Conference 2019 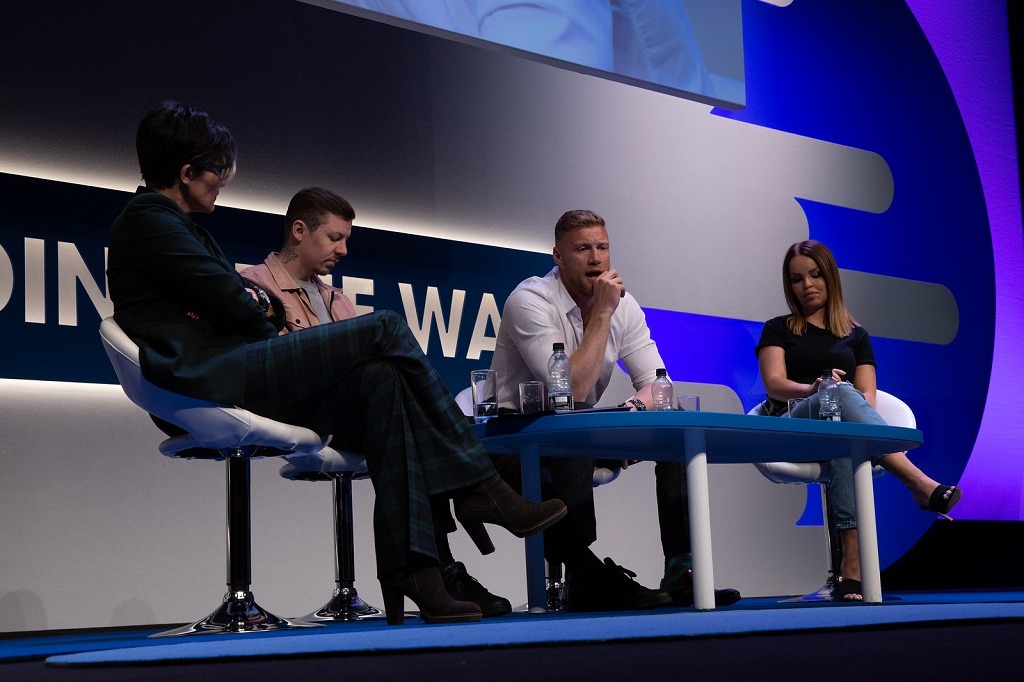 Mental health issues can affect anybody, regardless of their age, personality or workplace – and that includes the rich and famous.

British rapper and mental health support advocate Professor Green says his own battle started when he was very young.

He remembers complaining to his grandmother that he had an upset stomach and doctors struggling to find a cause.

“Some of my earliest memories were of me telling my grandmother, who we called nanny Pat brought me up, that I had a bellyache,” he says.

“Because I’d had an operation on my stomach when I was six weeks old, I was always taken to the doctors, and there was loads of back and forth as they were looking for some sort of physical ailment – which they never found.

“Of course, there wasn’t one, because the problem I had was anxiety. But I didn’t have the tools or the language to explain what was going on, and I didn’t really understand it myself until my late-20s.”

Stories like Professor Green’s – whose real name is Steven Manderson – aren’t unusual in the UK, where it’s now widely accepted that one in three adults suffer from a common mental disorder (CMD), with anxiety one of the most common.

But although mental health issues are being recognised as a part of life for many people, the workplace is still one area that people are afraid to talk about them.

Mental health in the workplace

A 2017 survey conducted by team-building and events firm Wildgoose, involving employees from 250 UK companies, found that 62% of employees had taken a day off in the previous year due to anxiety, depression or stress.

Of those respondents, 44% admitted to calling in sick with a different issue, and only 15% said they would share the issue with a manager or their workplace human resources department.

Compelo is among a large crowd eager to learn about how stories like his can be translated into helping mental health awareness within a workplace environment.

A common theme among the speakers is that talking about their mental health helps them to cope and manage their conditions on a daily basis.

Anchoring the debate, BBC News lead presenter Huw Edwards expresses concern that a lot has been said about this issue at work, but the evidence of practical support for those suffering is less impressive.

“But when it comes down to the practical reality of dealing with mental health issues in the workplace, there’s a wide spectrum of activity going on – from just talking and actually not being very helpful, to providing help and services at the most meaningful level.”

Professor Green is a patron of the Campaign Against Living Miserably (CALM), a suicide and depression support charity.

He believes employees may not feel able to disclose a mental health disorder, lest they get pushed down the list of candidates in line for a promotion.

“People are going to suffer from stress, and if you’re going for a promotion and it’s between two people, you’re not going to want to confess to someone that you’re having mental health issues.

“How would you feel comfortable talking about the stress that you’re going through?

“You want to be in the lead for that promotion and if you talk about your issues you’ll feel compromised, and that’s part of the problem.”

Prof Byron believes a perception that mental health conditions prevent somebody from achieving at work is fuelling fears like this.

She points out how Professor Green “will have felt anxious and done some incredible performances”, Flintoff will have “played amazing sport” despite feeling low and depressed alongside his eating disorder, while Ms Piper “will have done a lot of broadcasting and writing when you’ve probably been triggered and flash-backing”.

“The point is, mental health issues don’t stop you functioning and doing what you do,” adds Prof Byron.

Leaders feel that talking about mental health is showing weakness, and fear they could lose their jobs

Self-help writer Ms Piper was the victim of an acid attack perpetrated by her ex-boyfriend and an accomplice in 2008.

Since then, she has become an author of self-help books and founded the Katie Piper Foundation, a burns charity she set up to raise awareness about the plight of those with burns and push for British victims to gain access to the same rehabilitation treatment she received during her recovery period.

Having been labelled “inspirational” by the media – a word also used by Prof Byron during the discussion – Ms Piper says it can be hard to “fit on that pedestal” and live up to these expectations.

She suggests that people in higher-ranking business positions may feel, for similar reasons, that they can’t talk about their own mental health issues in the workplace.

“If you’re a parent and you say you’re not coping, will somebody call social services? Will you lose your child?

“If you’re a sportsman and you say you’ve got drug and alcohol issues, is that your career over?

“If I said I was depressed and anxious, would my publisher stop writing self-help books with me?”

What can employers do to tackle mental health issues in the workplace?

Change the language used when talking about mental health

Prof Byron believes that if mental health issues are to become normalised and gain parity with those of physical health, the language that workplaces and wider society uses to talk about it must change.

Pulling the celebrity panel up several times during the discussion on their own use of certain words, she identifies several that add a negative association and evoke shame about having a mental health issue.

“The word ‘admitting’, as in people admitting their stress, makes it seem like there’s something wrong with what they’re experiencing.

“And then committing suicide makes it sound like a crime – we’ve still got to think about language, it’s still an issue.”

Issuing a personal recommendation to the audience at BIBA’s conference and businesses more widely about how they can address mental health stigma, Professor Byron adds: “Take language like ‘admitting’ out of any of your brochures and other literature on mental health you’ve got.”

“In the workplace, if you knew the consequence would be that there’s a mental health team at work who will support and mentor you – and nothing would change in your role – then maybe you would come forward.

“It’s about making it clear that punishment won’t be served for admitting weakness.”

Create a culture of acceptance of mental health issues

He has featured in a BBC documentary exploring the prevalence of depression in sport, which includes his own account of suffering from the disorder – for which he remains both medicated and in therapy.

The 41-year-old believes that a key part of tackling the mental health stigma in the workplace is creating a culture of sharing among employees, the responsibility for which he believes falls squarely on the shoulders of the most senior staff within a business.

“Bosses and leaders have a responsibility to create an environment where people feel they can talk, not just about what they did last night or about their latest conquest, but about the way they’re feeling,” he says.

“To do that, there needs to be not just an element of trust but complete trust within that group of people.

“Once you’ve found that, and I think bosses and other people in positions of power have a responsibility to do that, it makes it so much easier for people coming in under them.”