Kymco: Meet the chairman of electric automaker out to change the world

Fresh from his unveiling of the Ionex Commercial range at the Paris Motor Show 2018, Kymco chairman Allen Ko sits down with Felix Todd to discuss his company, the increasing popularity of electric vehicles and what could get in the way of the trend continuing 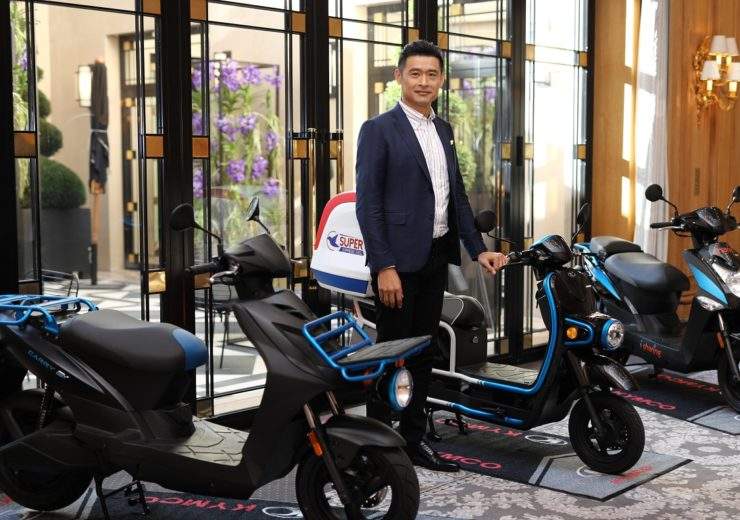 Changing the world is an objective many businesses claim to have, but Kymco and its chairman Allen Ko insist the Taiwanese electric vehicle manufacturer is one of the few that’s truly dedicated to seeing this idea through to fruition.

Mr Ko became chairman of the company in 2014 and during his tenure has overseen the launch of multiple electric scooter packages aimed at both consumers and, more recently, businesses and governments.

On the eve of the Paris Motor Show 2018, Kymco unveiled its new Ionex Commercial range, which is intended to provide private firms and public bodies with an eco-friendly electric fleet of scooters as an alternative to the fossil fuel-intensive ones they use now.

Mr Ko tells Compelo: “I have spent most of my professional life with Kymco and in that time I have come to learn that our company is really committed to doing good things – good things for people, for businesses and for the world itself.

“I would say that we are one of the few companies working in electric vehicles that is really taking the idea seriously – this is one of the most important aspects of Kymco.”

At the Four Seasons George V Hotel in the French capital, he explains why his company is so invested in electric vehicles – and what other organisations can do to accelerate their arrival on the road at scale.

The arrival of electric vehicles

According to a study by market analyst Next Green Car, electric vehicles in the UK have grown exponentially more popular over the past few years.

Looking globally, analysis by the International Energy Agency suggests that the number of electric vehicles on the road will go from three million today to 125 million by 2030 – progress that Mr Ko is pleased with but believes could be accelerated further.

“Electric vehicles have come a long way over the past few years – the technology is getting better every day,” he enthuses.

“But there is still a long way to go – we have to get to a new level of what I would call ‘electric awareness’.

“This is where people, businesses and governments truly come to realise the benefits of electric vehicles.

“You see it with some places already, take Taiwan [where Kymco is based] for example, where there are already some things in place to accelerate the adoption of electric transport.

“Some governments have introduced tax credits for consumers who buy an electric vehicle, and others have subsidies for businesses who work with them, while some also have set targets for getting rid of fossil fuel transport completely.”

In California, residents who purchase an electric vehicle benefit from a $2,500 (£1,900) tax credit, while those in Arizona enjoy reduced vehicle license tax, car pool lane access and reduced rates for electric vehicle charging.

Meanwhile, the UK has set a target to rid its roads of petrol and diesel cars altogether, with a ban on new sales of both set to implemented in 2040.

Mr Ko says: “This is a good start, but we need to see more of it – it will not be long before governments start to introduce real policies that make electric vehicles part of cities in ways we haven’t been before.

“I think most governments around the world are just waiting for the right solution before they start introducing more serious policies around electric vehicles.”

The roadblocks in the way of electric transport

While electric-powered mobility has become an increasingly popular mode of transport in recent years, its arrival on the main stage has not been free of obstacles, says Mr Ko.

His company has had to think carefully about what consumers, businesses and public authorities want to get out of electric vehicles, and has tailored its offering according to those priorities above all else.

“There are many factors for why it has been difficult for electric vehicles to really come into the market – a lot of it has to do with companies viewing them in the wrong way,” Mr Ko explains.

“But at Kymco, we looked at the development of the mobile phone – years ago their battery life was much longer, now you have to charge them everyday.

“If they were to have a longer battery life now, they would need to be bigger and heavier, and therefore less convenient to carry around.

“So companies reacted to this and gave their customers what they really wanted – it’s the same for electric vehicles.”

This is in addition to the ability to charge three batteries at once, but only have one in use so the driver doesn’t have to wait, which Mr Ko argues is what will make them popular.

He says: “Whenever you see a company talk about its latest release, the thing they always focus on is its range – can it go 200km or 300km before you have to charge it?

“But customers aren’t really so bothered about having to charge their vehicles every day – this just becomes a routine after a while like charging your phone, but when it becomes a problem is when people have to wait.

“That’s why the Ionex has the multiple removable battery system – it stops a problem that consumers really don’t want to have.

“Once companies start viewing things from the consumer perspective a little more, electric vehicles will evolve in the same way mobile phones have – and they will be more common on the streets of today.”

The changing business world and how Kymco has changed with it

The business world of 2018 is an entirely different entity to what it was just ten years ago, believes Mr Ko.

The maturing of social media not just as a communication platform but also a powerful business tool has put the onus on companies to develop a voice that goes beyond talking about what they’re selling.

Meanwhile, a more morally, socially and environmentally-conscious consumer base is demanding more from the firms they buy from than ever before.

“Since 2010, the world of business has changed,” Mr Ko explains.

“Now, even if you have an incredible product – the best product in the world, even – it isn’t enough.

“You have to have a strong brand so that you stand out – without a strong brand, your company will not succeed in the market of today.

“So we have been working hard to show that Kymco is not just about great products, but also it is about living up to our mission to make the world a better place.

“This has been a long journey, but we are confident that people now realise our company is one that’s here to make a positive difference.”