Shadow chancellor John McDonnell delivered a keynote speech to protesters at a rally against the banking sector on Saturday. James Walker caught a few minutes with the Labour MP to chat about the financial transaction tax, the structure of banks and austerity 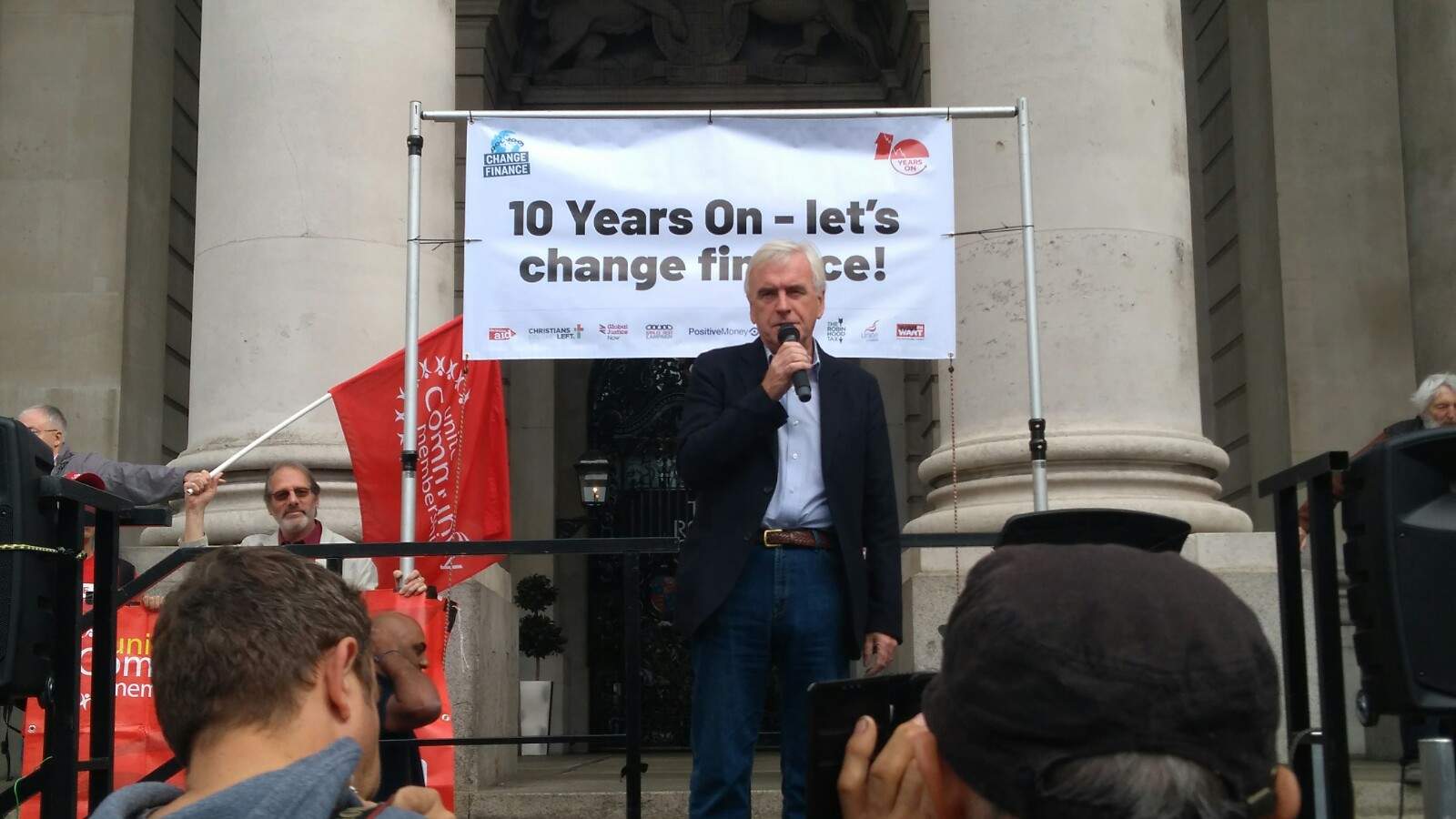 Around 100 protesters were gathered by the steps of the Royal Exchange on Saturday, chanting “banks got bailed out, we got sold out” as they and Labour shadow chancellor John McDonnell rallied against the banking system ten years after the financial crash.

As the ABBA hit Money, Money, Money blared from speakers on stage, many of those at the protest organised by the 10 Years On campaign were eager to hear the keynote speech from Mr McDonnell.

He’s spent the last few weeks unveiling the Labour Party’s plans for the economy ahead of its party conference in Liverpool, starting this weekend.

Among his plans, the politician has suggested that he would use the government stake in Royal Bank of Scotland to push the bank into lending money to small businesses.

Compelo managed to catch a few minutes with him before he went on stage to talk about the financial transaction tax, the structure of banking and austerity.

Below are excerpts from that conversation and sections from the Labour MP’s keynote speech.

John McDonnell on austerity after the financial crash

It would be ordinary working people who would pay for the crisis, not the speculators that caused it, and we’ve heard today from speaker after speaker what the implications of austerity have been.

A million people out there without the social care that they need. Seventy thousand children being brought up living their lives in temporary accommodation. Four million children in poverty, two-thirds of them in families where someone is at work.

What does that say to you? It tells you about the low level of wages; wages below the level of 2010.

This week, there were reports of the longest waits since records began in terms of cancer patients waiting for treatment.

Life expectancy in this country, the six richest country in the world, is declining as a result of eight years of austerity under this government, caused by the financial crash.

We need the finance sector to harness the resources of finance and invest in the real economy.

If you look at the report recently produced by Graham Turner, it demonstrated that the finance sector is harnessing the resources of the productive element of the economy and investing them in property speculation.

It is bizarre. Some of that property speculation is in agricultural land while agricultural production is declining.

What does that say to you? It means none of the lessons of the financial crash have been learnt.

John McDonnell on his plans for change ten years on

We have said we need structural change. Yes we’ll introduce the financial transaction tax, but we’ll also introduce a Strategic Investment Board which brings the bank, the Treasury, the business department, business leaders and trade union leaders together to harness resources and invest them in long-term, stable investments, as well as in the skills and technologies we need to face the fourth industrial revolution.

We will tackle the issue of tax evasion and tax avoidance. In the last general election they accused me of having a magic money tree. Well I’ve found it. It’s in the Cayman Islands. We’re going to dig it up and bring it here.

We’ll use those resources to invest in education, the NHS, the environment and the jobs that we need to ensure we restore and rebuild the fabric of our society that they have destroyed.

John McDonnell on money laundering in the banking sector

It is a disgrace that the City of London has now become the money laundering capital of the world. We will address the issue of money laundering. We will tackle the Russian oligarchs that are doing it.

We will tackle the whole issue of overseas companies owning properties in this city that are doing it often with hot money and also forcing land prices up and enabling people to exploit and speculate in property that people desperately need.

On the financial transaction tax, I’ve explained to them what it is.

We’re talking about raising £4.5bn – it’s hardly excessive – and it’s simply taking stamp duty and closing down some of the loopholes.

That would deliver us quite a significant amount of money that would help us pay for our national education service.

When I explain to the City that this is going to happen, I’ve also said to them: “If you disagree with it, you find me another way of raising these funds that is fair and equitable and I’ll listen to those ideas.”

They haven’t come up with anything yet.

John McDonnell on meetings in the City

I’ve been going along, setting out in detail our proposals for a Strategic Investment Board, the National Investment Bank and the issues around the financial transaction tax.

We’ve been raising tax avoidance and tax evasion, and actually the response to that has been pretty positive because of concerns that they have about people who are following the rules being penalised due to those who are not.

It has been an honest conversation. I’ve been saying to them: “A lot of this you’ll like, because we’re on the same page about long-term investment, we’ll get a decent rate of return but we’re not going to be ripped off anymore.”

John McDonnell on changing the structure of banks

We’re going to come forward in the next few weeks with our corporate governance policy – you’ll see that at Labour Party conference – and that will include the banks themselves as well.

Obviously we want to ensure we have a National Investment Bank set up and that will kickstart the growth of the economy once again.You’ll see that being matched by regional development banks.

If RBS is still in public hands, we’ll be using that as a vehicle for local banking as well.

In terms of banking overall, when we’re producing policies on further regulations that we think are important, we will do that in consultation.