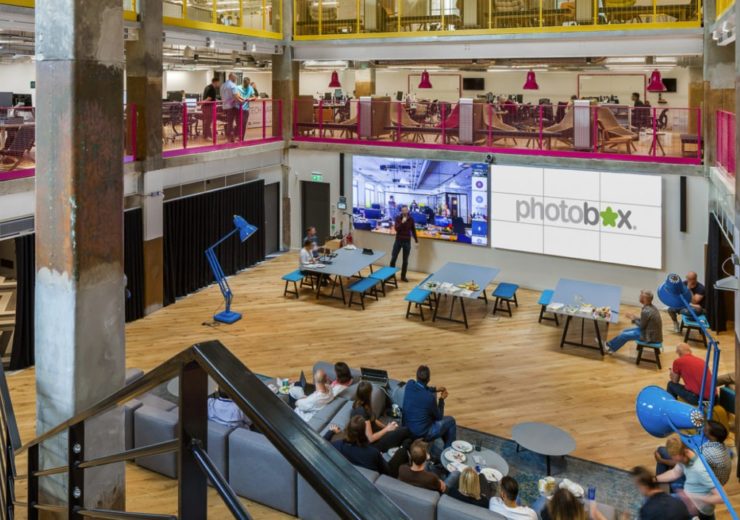 With its memorable advert jingle and innovative e-commerce platform now the envy of many companies, Moonpig is one of the UK’s online retail success stories. Jody Ford, CEO of parent company Photobox Group, explains to Sam Forsdick how he’s steered it towards being a tech company and why it’s now ready to survive on its own.

When Jody Ford was hired as CEO of Photobox Group in 2016, he was given three key tasks – bring in new talent, introduce new technologies and change company culture.

Three years after his arrival at the parent company of personalised gift brand Moonpig, he is leaving the position having overseen a brand redesign, a move to a new modern office and transforming the workplace ethos.

“There was a very clear job to do when I came in, in terms of changing the culture, hiring the talent and building the tech platforms,” says Ford.

“I then had to change the culture of the company and the chairman wanted it to feel like a modern tech company.

“That meant a company with high customer engagement, but also high employee engagement, where the workforce was driving the business.”

Ford came to the role with plenty of experience of working at a modern tech company.

He came to the company from online auction website eBay, having spent five years as the company’s VP of global growth marketing in Silicon Valley – home of the tech giants.

Ford says: “My time in Silicon Valley was amazing. I’d never worked in a one industry town before.

“In Silicon Valley, you can drop the kids off at school and the people you talk to all have their own start-ups or work at Google – everyone is involved in tech.

“Seeing everyone driving these amazing businesses and growing them so fast was a great experience.”

In his role, Ford was often the connector between eBay and many of the other web platforms based in The Valley.

“We worked with Facebook to help it create new types of ad format for online retailers and we spoke with Pintrest early in its growth, as well as Snapchat.

“It was great to work with all those companies. It’s a sort of this weird, half-friendship half-competition.

“On one level, Google is a very significant partner of eBay because it drives a lot of traffic and pays the search engine money. But, on the other hand, it’s competing for e-commerce and traffic too.

“Despite the competition, I was amazed the founders who’ve been successful wanted to help new entrepreneurs grow their ideas, rather than wishing them ill.”

Jody Ford on bringing a tech philosophy to Photobox

He began by hiring a new CTO, product officer and two managing directors for the Photobox brand – a personalised photo-based gift website – and Moonpig, which started by selling customised cards and now has a whole catalogue of products in the same vein, from mugs and aprons to alcohol and flowers.

These brands are complemented by Greetz, Hofmann and PosterXXL, acquisitions of similar companies that mostly pre-date Ford but are leaders in markets such as Spain, Germany and the Netherlands.

The next task for Ford, following recruitment, was to improve the visibility of the leadership team and improve communication across different parts of the business.

Ford says: “We installed TVs across the nine locations we had at the time, and got people together from the factories and the various offices for an hour to talk about the business, our customers and its performance.

“It meant we heard from different people and that helps to build a sense of identity as a company, rather than having separate identities for the offices in London, Paris or wherever.”

Another change was the introduction of weekly video updates from the leadership team, which were four minutes long and shot in a single take.

“Filming in one take makes it very authentic and it provided an opportunity to talk to the employees about what’s going on in the business,” Ford says.

“I did that for a few weeks and then we got the leadership team to do one. When it was Valentine’s Day, we went to the people in the warehouse preparing the cards and flowers.

“It creates a sense of openness and humaneness with leadership, and makes them approachable and available in a way perhaps they hadn’t been historically.”

The company also shifted to a squad-based working model, favoured by many of the big US tech companies.

“The culture change moved to being much more outcome-focused,” explains Ford.

“So rather than all working separately in the technology or commercial team, it was about evolving that so we were all focused ultimately on the customer outcome and driving up the metrics.”

Ford identifies three key technologies introduced to the Photobox Group brands that have had a big impact.

With 6.5 billion photos uploaded by customers to its websites for personalising cards and gifts, the change to a cloud storage system was a challenge for the firm to overcome.

Photobox Group worked with Amazon Web Services (AWS) to conduct the biggest data transfer in Europe, as nine petabytes – or one million gigabytes – of image data were moved from the company’s data centres to the cloud.

Ford describes it as “a really powerful investment” for the company, which has backed them with a new Moonpig tech hub in Manchester and a Parisian AI hub for Photobox.

Ford says: “Our e-commerce platform has some specific peculiarities that make it different from other retailers.

“For example, Moonpig has over 10,000 cards, so how do you get the right card to the right user?

“AI has become really good at recognising patterns for certain individuals but the interesting challenge, which our CTO is now solving, is to get AI to recommend gifts that aren’t for yourself.

“Our AI-enabled algorithm works off key words – so it works like a search engine – to find specific cards that reflect the personal relationship you have to the person you’re buying for.”

AI is also being used in Photobox’s new editor system, which can speed up the process of making a photo album from several hours to five minutes.

Ford adds: “The image recognition can take a customer’s photos and understand whether it’s a wedding, christening, travel book or a Christmas present.

“It can then organise the shots, from the bride getting ready to the arrival at the church, the service and the reception.

“It’s a fascinating computer vision problem that gets a lot of our engineers very excited.”

The internal changes were matched by a rebrand – the first that Moonpig had had since it launched in 2000.

The cartoon astronaut pig, which had acted as the brand’s mascot, disappeared along with the “.com” from the end of the name in order to give Moonpig a simplified and more modern design that reflected its new status as a tech company.

This was matched by the new £20m Photobox Group head office, based in Farringdon, London.

An old printworks, it was converted into an open-plan office, with each of the group’s brand’s based on a different floor.

About 400 of the 659-strong workforce are based in the headquarters.

Ford says: “We really thought about the design of that so it fitted in with the new squad model.

“We’ve gone from these siloed departments to having squads, where there’s one person from each team working together, so we needed a new physical location that suited the new working structure.

“That’s been another significant shift and is a big upgrade which gives space for the way we want to operate.

“It’s great for hiring talent as well because people walk in and immediately like the look of it.”

Photobox has launched more than 100 new products over the past 12 months, including towels, playing cards, coasters and wooden photo boxes.

Although millennials are criticised for many things, they have been credited with stabilising the greetings cards market.

Ford says: “Young people are still sending the same amount of cards and whether it’s birthday cards, Mother’s Day, Father’s Day or Valentine’s Day, the number of gifts sold is growing across all demographics.

“The online proposition is really great because it means you can chose from a wider range of cards, we can have a longer cut-off time and the gifts don’t feel as generic as it would if it was bought from the corner shop.

“People still want ways to show they care by sending something physical, rather than just a Facebook post.”

New categories that Ford has noticed growing within the gifting market include kids, pets and travel.

He adds: “A new range of products that has really worked is our letterbox range, which are products that can be posted through the door without the postman having to ring the doorbell.

“Letterbox flowers were the first to launch but we’ve managed to expand to letterbox sweets, confectionery and even letterbox wine, where we have a bottle that can fit through the door.

“It’s an interesting emerging trend that works really well for the brand.”

Jody Ford stepping down as CEO

After three years at the company, and having completed many of the changes he was brought into do, Ford sees it as a case of “job done” at Photobox Group.

He will step down as group CEO and move into a non-executive director role by autumn, while Moonpig and Photobox will be split into two independent businesses.

Ford says: “My own position has been focused on growing the team to get the business into a place where they’re ready to grow independently.

“Unfortunately, there are a very small number of redundancies associated with that.

The planned restructuring has put 17 head office roles at risk of redundancy, with consultations ongoing about these positions and another 25 customer service roles that could take the total number of job losses to 42.

He adds: “From my point of view, I’ve been asked to come in and change the company culture and build the tech platforms.

“Having now completed a large part of that, and put in place the leadership teams, we’ve got to a natural point where we wanted to be able to run Photobox and Moonpig as independent businesses.

“This will help to drive the speed and allow both leadership teams to take full control  independently of one another and allow them to grow faster and faster.”