Jeff Bezos in 1997 had just taken Amazon public and was focused on selling books - probably not even dreaming of smart speakers, streaming services and the cloud. James Walker found a 1997 interview with the founder of the near-trillion dollar company in which he made some fascinating revelations 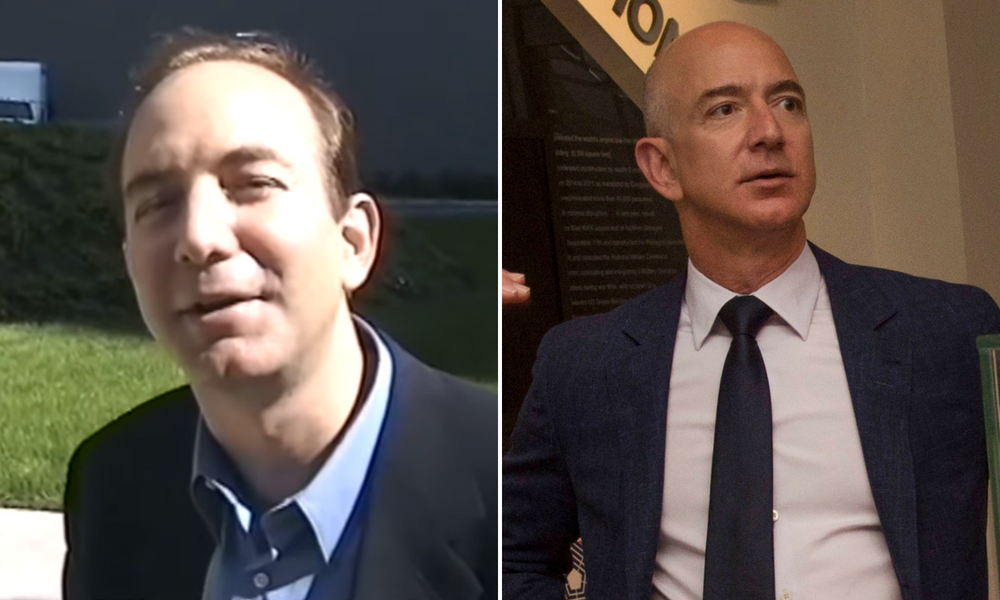 Amazon founder and chief executive Jeff Bezos described 1997 as “Day 1” for the internet and what was then his online bookstore.

The company also boasted a 738% increase in customers from the previous year and its number of staff almost quadrupled from 158 employees to 614.

All outstanding numbers but it barely scratches the surface compared to what it has become in the 21 years since.

Amazon is now one of the largest companies in the world – trading not just in books, but most retail products, cloud computing, video and music streaming, groceries, smart speakers, television and film production, pharmaceuticals and even Premier League football broadcasting.

It was only narrowly beaten by computing giant Apple in the race to become the world’s first trillion-dollar company, but is unrivalled for second place.

The conglomerate with a market value higher than $900bn (£700bn) has become such a dominant market force that when it announces it will enter a new market, the stock prices of major firms in that sector tend to dive in a phenomenon known as the “Amazon effect”.

Amazon’s customer base has skyrocketed in similar fashion from the early days of 1997.

Its Amazon Prime subscription service alone has 100 million members – almost 100-times its entire number of customers when it was just an online bookseller.

Bezos himself has also seen his fortune grow to a level many people find absurd. Last month his net worth stood at $151bn (£117bn) – some $12bn (£9.3bn) more than the GDP of Hungary – making him the richest man on earth.

A video interview with Bezos in 1997, a time when he talked in millions rather than billions, has been doing the rounds on message boards of late.

The video, courtesy of one Richard Wiggins, covers the origins of Amazon, the internet’s early days and the power of online advertising.

Compelo has picked out five highlights from the interview with Jeff Bezos in 1997 as well as his letter to shareholders.

Jeff Bezos in 1997: ‘I dreamed up Amazon while working for a hedge fund’

Amazon started life an online bookseller in 1995 and put itself on the stock market two years later.

Before moving into online commerce, Bezos worked at the hedge fund DE Shaw and, as he says in the video, jotted down 20 things he could sell online.

Asked how the idea for Amazon came to him, Bezos said: “Well, three years ago I was in New York City, working for a quantitative hedge fund, when I came across a startling statistic that web usage was going up at 2,300% a year.

“I decided I would make a business plan in the context of that growth, and I picked books as the first, best product to sell online.

“Books were great as the first best, because they are very unusual in one respect, which is that there are more items in the book category than there are in any other category by far.”

He added that music was his second choice product, given that there were about 200,000 CDs in circulation at any time compared to millions upon millions of books.

Jeff Bezos in 1997: ‘Online advertising is a nirvana for marketers’

The shift from print to online advertising has impacted on several industries but in others, it has been something of a godsend for marketing departments.

It is far easier to see how effective an advert’s content and placement have performed online compared to print media, and they are generally cheaper to publish.

Comparing print and online advertising in the early days of the internet as we know it, Bezos said: “We don’t do this anymore, but at the very beginning, we put little tiny ads at the bottom of the front page of The New York Times.”

“The problem with that kind of advertising is that it’s extremely difficult to track.

“One of the great things about online ads – we do advertising today on 40 different websites, including banner ads – is it’s very easy to track in terms of knowing how effective it is.

“We know for each piece of creative in each venue not only how many click-throughs we get but how many sell-throughs we get and how many dollars of revenue it generates per ad dollar spent. That is a marketer’s nirvana in a certain sense.”

It can’t be said that Bezos has become totally disinterested in print as the power of online advertising has grown, considering that he snapped up The Washington Post for $250m (£194m) five years ago.

Jeff Bezos in 1997: ‘We’re at the Kitty Hawk stage of electric commerce’

The World Wide Web was invented eight years before the Bezos video by the British computer scientist Tim Berners-Lee, but it could be argued that it began morphing into the internet we are familiar with today around the late 1990s and early noughties.

Bezos said that online retail – a key function of the internet – was at its “Kitty Hawk” stage in 1997.

Kitty Hawk, a small town in North Carolina, was the location where the Wright brothers flew the world’s first airplanes in 1903.

He clarified that Amazon worked as an online bookseller in 1997 because the sheer size of its stock meant it “couldn’t exist any other way”.

Speaking about opportunity during the internet’s infancy, Bezos said: “We’re moving forward in so many different areas and lots of different companies are as well.

“I think a millenia from now, people are going to say: ‘Wow, the late 20th century was really a great time to be alive on this planet.”

Amazon has garnered more than money and customers in the 21 years since the interview.

It has also attracted criticism for working conditions at its warehouses, after the reporter James Bloodworth – who worked undercover at an Amazon warehouse in England – revealed in his book Hired that workers urinated in bottles for fear of missing targets because of trips to the loo.

In his 1997 letter to shareholders, Bezos wrote: “It’s not easy to work here (when I interview people I tell them, ‘You can work long, hard or smart, but at Amazon.com you can’t choose two out of three’), but we are working to build something important, something that matters to our customers, something that we can all tell our grandchildren about.”