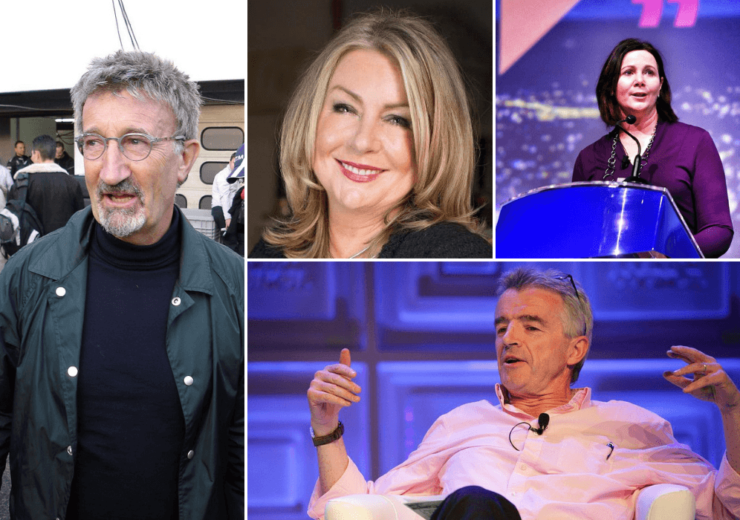 From the loose-lipped boss of Ryanair to the first ever female CEO of an English Premier League club, Irish business leaders are as colourful as the streets of Dublin on St Patrick’s Day.

Some of them have key roles in the country’s telecoms, media, energy and finance industries, while others have been handpicked for top jobs at global organisations.

To mark one of the world’s biggest national celebrations, taking place on Sunday (17 March), we profile some of the top Irish business leaders.

One of Ireland’s most high-profile entrepreneurs – not to mention the richest, with an estimated wealth of $4.1bn (£3.1bn) – Denis O’Brien is never far away from the headlines.

He runs and owns 94% of telecoms firm Digicel, which operates a mobile network in the Caribbean, Asia Pacific and Central America regions.

The 60-year-old Cork native, who is also a minority shareholder of Celtic FC, first came to prominence when he set up Esat Telecommunications, which ran Ireland’s first commercial mobile network Esat Digifone in the 1990s.

But the deal with the Irish government was shrouded in controversy as a tribunal later found that communications minister Michael Lowry’s decision to award Esat the contract was influenced by payments he received from O’Brien.

Rent-a-quote Michael O’Leary can always be trusted to make a jaw-dropping statement when discussing Ryanair, the budget airline of which he is chief executive.

The 57-year-old, born in Kanturk, has previously suggested “shooting” travel agents, charging passengers to use the toilet and making those who forget their boarding pass pay 60 euros “for being so stupid”.

He joined the company in 1987 – two years after the airline was set up as Danren Enterprises to break up the duopoly on London to Ireland flights held by British Airways and Aer Lingus at the time.

During his time at the helm, O’Leary has sought to replicate the low-cost model originated by Southwest Airlines in the United States.

Ryanair now carries more than 139 million passengers each year on more than 2,000 daily flights from 86 bases.

Airbnb is one of the world’s most valuable start-ups, having been credited with pioneering the sharing economy that spawned Uber, JustPark and Zipcar.

And Aisling Hassell has a major role in the $30bn-valued (£22.6bn) company as the head of global customer experience and vice-president of community support.

Based at its EMEA HQ in Dublin, she leads a team focusing on every aspect of the guest and host experience on the accommodation rental platform.

The Electricity Supply Board (ESB) is responsible for supplying electricity to a sizeable proportion of Ireland’s homes and businesses, with 1.4 million customers – and one of its most senior people is Marguerite Sayers.

Since April 2018, she has occupied the role of executive director in customer solutions for the company, which is 95% owned by the Irish government.

Previously, she was managing director of subsidiary ESB Networks, which finances, builds and maintains the transmission system for power flow – servicing 2.3 million customers in the country.

Perhaps best known as the largest individual shareholder of Celtic FC, Dermot Desmond is also a financier with a large portfolio of investments.

The 68-year-old, who hails from Macroom, County Cork but lives in Gibraltar, began his career working at Citibank in Dublin and PwC in Kabul, Afghanistan.

Since the 1980s, he has founded private equity firms including NCB Stockbrokers and International Investment & Underwriting.

Through these investment vehicles, he’s been involved in consortiums that have bought – and sometimes sold – assets such as five-star Barbados resort Sandy Lane Hotel, London City Airport and Irish food company Greencore.

Other investments have included the Bank of Ireland, Manchester United FC and the BETDAQ betting exchange, giving him a reputation as one of Ireland’s greatest dealmakers.

The former motor racer is one of Ireland’s most-recognised faces in business after founding the Jordan Grand Prix team, which was a Formula 1 constructor from 1991 to 2005.

Since then, he has been a key pundit in BBC and Channel 4’s coverage of the sport, as well as a presenter on motoring TV show Top Gear.

Jordan, 70, has a number of other business interests outside sport, including vodka brand B10, energy drink brand EJ-10 and Bulgarian property company Madara Capital.

As CEO of Premier League club Leicester City, Susan Whelan is one of only a handful of women to occupy a top role in the English Football League.

Dublin-born Whelan, who turns 56 this year, was brought to the club by Vichai Srivaddhanaprabha, who owned the club from 2010 until his death in a helicopter accident in October 2018.

She had also been a board member of his Thailand-based duty-free business King Power, forging a reputation as one of the most respected executives in the travel retail sector.

A year after joining Leicester in 2010, Whelan was appointed as CEO – becoming the first ever woman to take this job at an English Premier League club.

Since then, she has overseen a restructuring of the club’s commercial arm and oversaw the Foxes’ historic Premier League title win in 2016.

Owing to a sustained presence in the top tier – the club was in the Championship when Srivaddhanaprabha took over – and a Champions League campaign, the club is now reportedly worth ten-times more than in 2010.

Bernard Byrne has been CEO of Allied Irish Banks (AIB) – one of the big four commercial banks in Ireland – since June 2015.

But in October 2018, he announced he will resign from AIB later this year to take up a role at Ireland’s largest stockbroker and wealth manager, Davy Group, as the head of its capital markets division and deputy chief executive.

He has also been president of Banking & Payments Federation Ireland, which acts as the “voice of banking and payments” in the country, since January 2015.

In 11 years as chief executive of the Irish Stock Exchange (ISE), Deirdre Somers had a profound impact before stepping down in June last year.

She worked at the ISE for more than two decades and assumed the top job in 2007, leading her to turn it from a peripheral cash equities exchange into what it claimed to be the world’s leading hub for the listing of debt securities and funds.

In November 2017, she oversaw the sale of the stock exchange to Euronext, the pan-European stock exchange operator with markets in Amsterdam, Brussels, London, Lisbon, Dublin and Paris, for 158.8m euros (£135.5m).

The decision was taken following the Brexit vote in June 2016 as she identified the potential of luring London-based companies to take out a dual listing in Dublin.

Somers, educated in Cork, was replaced as CEO of the exchange, now known as Euronext Dublin, by Daryl Byrne, but remains president of the European Securities Exchange, a role she has held since June 2015.