Morten Hansen has given advice on how to be a good business leader to the likes of Apple, IBM, Microsoft and Walmart – and this week he shared his tips with decision-makers at Teradata Analytics Universe 2018. Dan Robinson was in the Las Vegas crowd 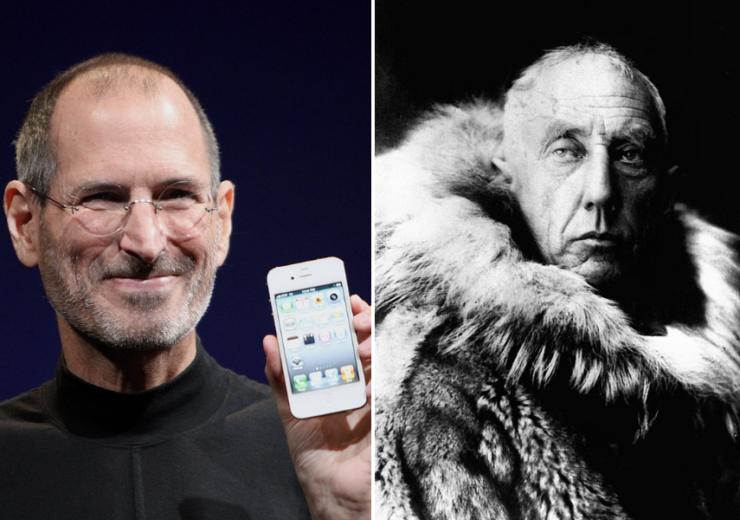 When Apple released the iPad in 2010, it was a defining moment in mobile technology – but Steve Jobs’ admission that it had been delayed from several years earlier demonstrated how to be a good business leader.

In an interview shortly after the tablet’s release, he told the story of how one of his company’s developers had come up with a prototype for replacing a keyboard with a touchscreen interface in computers.

“We looked at it and thought ‘we can build a phone out of this’, so we put it on the shelf and made the iPhone instead,” he said.

“Then later we came back to do the tablet.”

Morten Hansen points to this “brave” decision to highlight how resisting temptations and perfecting timing are key to strong leadership.

Speaking at the Teradata Analytics Universe conference, he says: “It’s very easy to say ‘yes’ and take on more but I believe one of the most important professional skills in a world where we are swimming in data and opportunities is the ability to say ‘no’ in an appropriate manner.

“This could be to your boss, your staff or your clients, in order to focus on excelling on what you’re doing.

“Then you need to be able to obsess, just like Steve Jobs and Roald Amundsen – and you have a winning formula to success.”

While in a completely different domain to the Apple boardroom, Morten’s fellow Norwegian Roald Amundsen – the famous explorer who led the first expedition to reach the South Pole – offers lessons that can be taken on board by the C-suite today.

Amundsen was pitted against Captain Robert Falcon Scott – an Englishman backed by the wealthy British Empire – in a race to reach the South Pole in the early 20th century.

Despite his disadvantages in terms of resources, Admundsen’s team won by five weeks, while Captain Scott and four of his men died on their return journey.

It later transpired that the British party used a mixture of five transportation strategies – man-hauling, dogs, skis, motor sledges and Siberian ponies – in contrast to the Norwegian team, which focused all its efforts on perfecting moving with the help of dogs.

Morten explains: “You have to be incredibly good at that one thing to beat someone with five strategies.

“So he paid extra to get the best dogs and dog drivers, then practised like hell to become incredibly good at dog-driving.

“He went in on one thing and mastered it like no one had mastered it before. Scott, meanwhile, had to co-ordinate on five things.

“This demonstrates the insight of doing less and then obsessing to excel in those few things.”

He surveyed 5,000 employees as part of his research and found business leaders need “extremely few but super-clear objectives”.

How to be a good business leader: What’s the best way to use data in a business?

With so much data on customers being collected by companies, knowing what to do with it is no easy task.

But Morten says a focused approach is the best way to utilise it.

“It’s far better to say ‘what are the key business problems we’re going to solve here?’ and then look for analytics and data to solve those problems,” he adds.

He gives the example of a warehouse manager who was deploying lorries to corporate customers.

While internal data showed 99% were leaving the depot on schedule, it was only after customers complained about lateness that he discovered just 65% were reaching their destination on time.

Morten explains: “Many companies chase internal productivity metrics, whereas the value metrics are about the value they have for customers.

“It’s a completely different way of looking at business goals. Once companies start to look at value, they begin innovating.

“It provides another lens of the world, allowing them to change.”

Looking at data through a different lens also helped a high school in Detroit turn around results failure, having ranked among the worst 5% in the State of Michigan at one stage.

The principal asked teachers to begin doing lectures when students are at home by video link and homework was done in classrooms instead.

Flipping a hundreds-years-old model around may have appeared to be a radical move but results soared, with failure rates declining from 52% to 19%.

“Someone had the creative insight to ask a different question – ‘how can you change the very model of teaching?’” says Morten.

“They then put the technological solutions behind it and the combination of that creative insight and data analytics created a winning strategy.”

Southwest Airlines in the US boasts the most profitable business model in the history of the airline industry with its no-frills “bus on wings” concept of fast, easy and cheap travel.

It is regarded as a pioneer but when Morten studied its story, he found the model had actually been copied from Pacific Southwest Airlines (PSA), which operated budget flights along the west coast.

He says: “The entrepreneurs of Texas [where Southwest is based] thought it was a great way to run an airline and went back to start the business model for Southwest – which read ‘copy PSA in Texas’.

“They had their flight attendants dressed in orange, had a friendly atmosphere and promised a 10-minute turnaround at the gate. It was a direct copy.

“We’ve learned that to succeed in a business world, we should be the most innovative.

“But we found it’s not about how innovative you are, it’s about how you innovate that matters.”

When US auto insurance giant Progressive Corporation entered the market for lorries, it appeared to bosses to be an attractive proposition so they aggressively scaled up from the beginning.

But it was a “giant failure”, Morten says, as [former chairman] Peter B Lewis admitted to be ashamed as the company pulled out of the market.

A few years later, the company went into the “safe driver” market, tweaked its model and then backed it big once it had worked out how to scale properly. It was a success.

Morten uses Progressive as an example for his “bullets and cannonballs” model to how to be a good business leader.

The first strategy was an “uncalibrated cannonball” that was fired without properly understanding the target.

In the second plan, Progressive used “bullets and then cannonballs”, by working out where it was aiming before attacking with a heavy intent.

Morten says: “Once you’ve got the experimentation right, then you can scale aggressively.

“We found 22% of new business models are successful in the first year – some cannonballs do hit, but not often.

“But 88% are successful in their second year and that experimental approach is a better way to drive innovation.”

When Apple launched its iPod in 2001, it marked a monumental moment for the music industry as songs, albums and playlists could be digitally stored on an easy to use and slickly-designed handheld player, with music bought and managed from the iTunes online store.

But Morten argues it had been in Sony’s hands to dominate that segment of the market, having given the world the first Walkman – a personal cassette player launched in 1979.

The problem wasn’t that it stood still – it had in fact released the Sony Connect online store that connected to its music devices – but that the company was too fragmented to work together cohesively.

The company was organised into silos for Sony PC, Walkman, US and Japanese music divisions, and video.

Morten says: “Sony had too many people working alone and as a result it was a failure. Then Apple came along and took over the market.”

He believes there are four barriers to sharing and collaborating within large companies – a lack of motivation to invent in certain departments, hoarding or withholding useful data, inability to find the information needed easily, and a lack of teamwork.

His solution is to articulate common goals and offer incentives for employees to work outside their own team to drive down motivational barriers, while providing the required IT tools and data education can make it easier to search for information and improve teamwork.

“A culture of data-driven innovation attacks all those barriers, cuts data hoarding and changes culture,” he adds.

“Great companies today use great data – they apply data and analytics pervasively across the organisation to create an intelligent enterprise.

“Change isn’t something to fear. It brings opportunities for all of us, including to have an amazing career on an individual level because you’re in the middle of that revolution.”