Great Recession 10 years on: How campaigners are pushing for banking reform

Protesters gathered outside the Royal Exchange, in the City of London, to mark the ten-year anniversary of the Lehman Brothers collapse - which sparked a Great Recession that the world is still recovering from. James Walker was in the crowd to find out about the banking reforms campaigners are putting forward 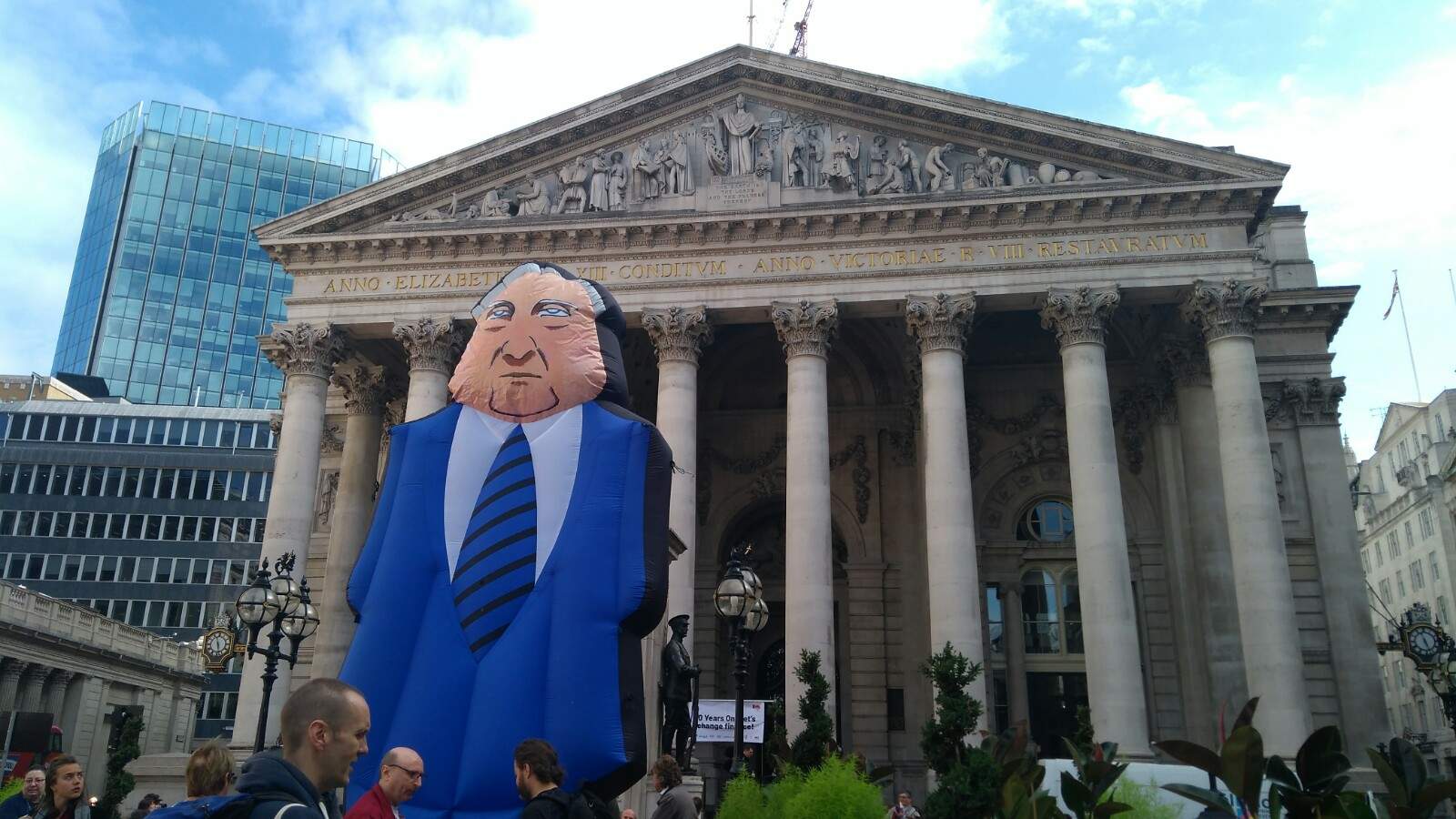 On the steps of the Royal Exchange, a hub of commerce dating back to the 16th century that is in the shadows of the Bank of England, about 100 protesters were rallying against the banking sector on a Saturday lunchtime. Marking a decade since the Lehman Brothers collapse that sparked a global economic crisis, they made it clear that problems persist 10 years on from the so-called Great Recession.

While the US bank may have been one of the main players at fault for the credit crunch that left millions of ordinary people out of pocket, campaigners were visibly still angry at the banking sector across the world.

With a soundtrack of ABBA’s Money, Money, Money filling the airwaves around the heart of the City of London financial district, the protesters unveiled two visual icons to symbolise the underlying issues that mean many people still don’t trust the unelected safekeepers of commercial banks.

A giant, inflatable banker hovered above the assembled crowd outside the Royal Exchange, perhaps illustrating the looming threat of another financial crisis, while a giant greetings card to banks was inscribed “10 years older and none the wiser”.

After chants of “banks got bailed out, we got sold out”, the protesters – all backing the 10 Years On campaign for banking reform – got up on stage one by one to criticise banks, risk investments and austerity.

Rachel Oliver, head of campaigns at non-profit monetary reform lobbyist Positive Money, one of the main organisations behind the campaign, wants to see the “too big to fail” mantra come to an end.

The theory suggests that financial institutions are so large and so interconnected that their failure would be disastrous to the greater economic system – but campaigners don’t want the country to be so reliant on banks.

He said: “We’re feeding the banks a stream of money simply because they’re the ones who create credit and not the government or the Bank of England.

“If I could change anything instantly, I would say take credit creation away from banks and give it to the Bank of England.

“However, this would immediately cut the income of the banks to a point where they were 100 years ago – that is to say a small organisation providing services on a local high street.”

While some may snort at the impact of a Saturday afternoon protest outside offices that are only accommodated during the week, there are hopes the impact upon the finance industry will be over the long-term.

Protester Joe MacDonald, who works as a sign painter, said: “I don’t think demonstrations change global finance, but if it helps solidify movements then you’re on to more of a winner.”

How the 2008 Great Recession unfolded

Lehman Brothers filed for bankruptcy on September 15th 2008 as a result of its investments in the mortgage market, which was saturated with subprime mortgages – loans for housing made to people who would find it next to impossible to keep up with repayments.

The Wall Street bank was by no means the only one to have its foot too deep in the dodgy mortgage market.

Housing markets plunged as people with mortgages defaulted on payments, leading banks across the globe to flood markets with houses – reducing the price of homes as supply outstripped demand.

The result was a worldwide Great Recession and costly government bailouts of banks that had left themselves exposed to subprime mortgages.

The UK government bailed out banks – including the Royal Bank of Scotland (RBS) and Lloyds Bank among others – to the tune of £1.16tn in support, according to National Audit Office figures.

US taxpayers shelled out even more to prop up the finance industry. The US government spent an initial $700bn (£533bn) on bank bailouts under the Troubled Asset Relief Program (TARP).

But the special inspector general for TARP said total US government efforts to buoy the finance sector stood at $4.6tn (£3.5tn) in 2015.

As millions of people were left out of homes, in severe debt or out of work, several banks dissolved as a result of their mortgage investments.

The US investment bank Bear Stearns was snapped up by JPMorgan Chase, the British bank Northern Rock was wound-up by 2012 and Lehman Brothers filed for bankruptcy in 2008 after the US government refused to bail it out.

A few banks, such as RBS and Lloyds Bank, in the UK became part-owned by the government as a condition of the bailout packages they received.

Two years ago, it was reported that just 35 bankers went to prison for their involvement in the financial crash.

Great Recession 10 years on: What has changed?

Not a lot. Several reports of re-emerging investments in subprime mortgages and similarly risky debt markets have surfaced this year, suggesting the finance sector has not learnt a lesson from the 2008 Great Recession.

Financial News reported that ex-Lehman Brothers employees were holding a reunion with cocktails and canapes on the 10th anniversary of the crash – suggesting they haven’t had to bare much of cost of the crisis partly caused by their former bank.

Giving a speech to protesters on Saturday, Shadow Chancellor John McDonnell said: “If you look at the report recently produced by Graham Turner, it demonstrated that the finance sector are harnessing the resources of the productive element of the economy and investing them where? In property speculation.

“It is bizarre. Some of that property speculation is in agricultural land while agricultural production is declining.

“What does that say to you? It means none of the lessons of the financial crash have been learned.”

Public trust in the banking sector has continued to sink. Polling published earlier this month found that two-thirds of Brits had no trust in banks to operate in the interests of wider society.

It also found that a similar number of the surveyed 2,250 adults feared that banks would drag the UK economy into another financial crisis.

While little has changed in terms of trust in bankers and the risks of their investments, that is not to say nothing has changed over the decade since the crash.

The UK government sold off its final shares in Lloyds Bank last year, having once held a 43% stake in the company.

It has also been working toward shifting its shares in RBS – selling a 7.7% stake in the bank earlier this year at a loss exceeding £2bn. At the time of writing, it still holds a majority share in the firm.

“The government should be holding onto that stake and breaking up RBS into smaller, regional banks so we diversify the banking system and make it more resilient.”

But the Office for Budget Responsibility said taxpayers would lose £17.5bn from the £137bn spent to save high street banks.

Analysis by the monetary reform group Positive Money also found that average household has lost £23,000 over the last ten years, because wage growth has not gone up at pre-crash levels.

Great Recession 10 years on: A push for reform

Compelo spoke with Mr John McDonnell about the Labour Party’s proposed financial transaction tax, an extension of stamp duty charges to share options – put forward by the Labour Party as an alternative to paying for post-crash debt by cutting back spending on public services.

Asked how the city had responded to the financial transaction tax policy in meetings, he said: “What I’ve been saying to them is this is what our policies are – some of them you’ll like, some of them you’ll dislike – but they’re going to happen, so get used to it.

“We’re talking about raising £4.5bn, it’s hardly excessive, and it’s simply taking stamp duty and closing down some of the loopholes.”

On top of pushes for greater taxation of the finance sector, structural reforms of banking were also pitched to protesters.

Giving his speech, Mr McDonnell said Labour would be cracking down on money laundering in the City and “tackle the Russian oligarchs that are doing it”.

He added: “Obviously we want to ensure we have a National Investment Bank set up and that will kickstart the growth of the economy once again. You’ll see that being matched by regional development banks.

“In terms of banking overall, when we’re producing policies on further regulations that we think are important, but we will do that in consultation.”

Rachel added: “One year’s revenue from the financial transaction tax would mean we could plug the NHS funding gap, fix the social care crisis and we’d be able to afford 20,000 new teachers and build 80,000 genuinely affordable new homes.

“That tax would be a tiny drop in the ocean to the bankers who make the most expensive financial transactions.

“But it would really help to rebalance things and truly mean we are all in this together.”