How data has helped transform England under Gareth Southgate

As Google revealed it would be the official cloud partner to the England national teams and the FA, Gareth Southgate explained some of the new methods of data analytics being brought to the game 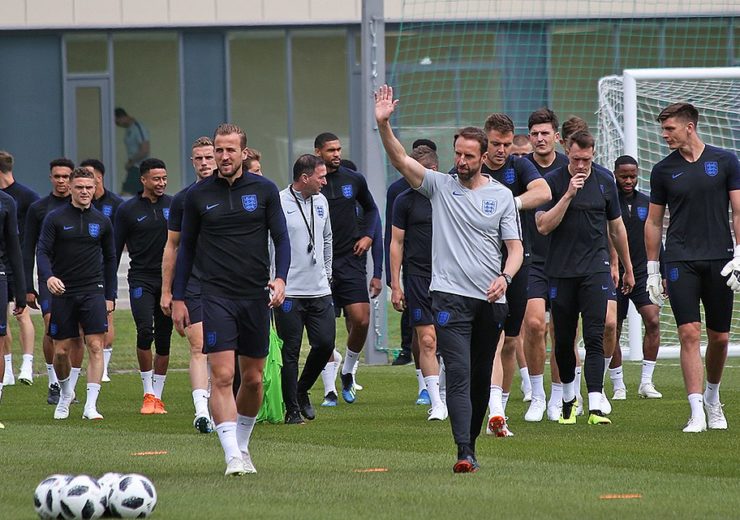 The England team have used data analysis to help them make small gains in tournaments and on the pitch (Credit: Кирилл Венедиктов/Wikimedia Commons)

Should Gareth Southgate lead England to Euro 2020 glory next summer, he will no doubt thank his players, coaches and family – but technology will have played a key role too.

The national football team boss believes he has reaped the benefits of using data analysis behind the scenes at St George’s Park after turning around a side that had under-performed for years prior to reach the World Cup semi-final in 2018.

His appointment by the Football Association formed part of a new strategy to bring the England set-up into the 21st century – although he also warned coaches seeking to follow their success they should “be careful” not to allow digital tools to takeover how they view players.

Speaking at the Google Cloud Next conference in London today, he said: “The level of performance and competition is now so high that people are seeking marginal gains.

“When we started, we needed huge gains, we had a lot to improve on. But every sport is seeking those small improvements and technology is an important part of that.”

Gareth Southgate on changing the culture of the FA

The 49-year-old, who won 57 caps as a player for England between 1995 and 2004, was appointed as national team manager in November 2016 after a short stint in a caretaker role.

While the team had been humiliated in a 2-1 defeat to Iceland in the last 16 of Euro 2016 the previous summer, he admitted the biggest challenge he faced was changing the culture of the FA, which governs football in England.

“The FA has historically been viewed as old men with blazers who are out of touch with the rest of society and we have had national teams that haven’t performed well,” he said.

“We needed to modernise our thinking and that required a mentality shift, whether that was in terms of the style we wanted to play or in terms of our preparation for penalty shoot-outs.”

How Gareth Southgate uses technology in the England team

As part of the overhaul, the FA appointed a new CEO and technical director, and opened a new training facility at St George’s Park, where many of the performance insights come from.

Data analytics has been a core part of the strategy.

Now, every aspect of a football player’s on-field and off-field actions are scrutinised – whether it’s using GPS to assess how far and fast they’re running, to using sleep monitoring devices to observe their condition.

“We are awash with data,” Southgate said. “Football is a low-scoring game with a lot of random events, so blips in the data can easily arise and there’s a danger of reading too much into them.

“Our challenge is to find what is relevant for us as a coaching team and how much of that we need to share with the players, because we can overload them with information.

“It’s very easy to be critical, especially of young players, and place too much emphasis on one piece of data.

“You need to be careful with the data and look for patterns over a period of time.”

Football is a particularly difficult sport to analyse using technology, but one area where data is key is team selection.

Southgate said: “We now gather huge amounts of data, but if you were looking for an area to focus on as a coach then I think squad selection would be the key.

“How do you differentiate between two different players in the same position?

“For the forward players, the data can be quite clear, and normally comes down to who scores the most goals or assists the most.

“For other positions, it depends on the style and philosophy of the team and that is more complicated to measure.”

However, assessing a team overall can be more difficult, according to Southgate.

It’s quite common for a team to hit statistical targets, such as possession stats, shots on target and number of corners and still come away with a loss.

But for the England coach, football’s unpredictability is part of its “beauty and attraction”.

How technology has changed football coaching

The pace of change is also increasing.

Southgate recalled that when he was a player, the closest they got to video analysis was watching the first 10 minutes of a previous game on VHS tape in the managers office.

“There’d be 18 of us crowded around a small television, trying to watch our opponent’s last match,” he said.

“Now we have footage from the last 10 matches covering their play in each third, analysis of their set plays which gives a much bigger depth of knowledge.

“For young players it’s also great to be able to review their games and improve their performance, so there are a lot more opportunities for coaching as well.”

Technology has also provided new ways for the national team coach to communicate with his players.

This is particularly important as the full squad doesn’t meet as frequently on the training pitch as they do with their clubs.

Southgate added: “If we have a player that featured for his team the other night, we can send them a few pieces of footage of their performance at their club and ask them what they think of their play.

“They can view it on their phone and we can remotely coach.

“When you’re involved with a team that aren’t together on the training pitch every week, then that’s a huge advantage, and we’re only just starting to scratch the surface with that.”