Introducing the Uber of the skies

Archer Aviation, hailed the 'Uber of the skies', challenges the status quo of aerospace innovation. We speak to the founders to find out how flying taxis could redefine urban air mobility. 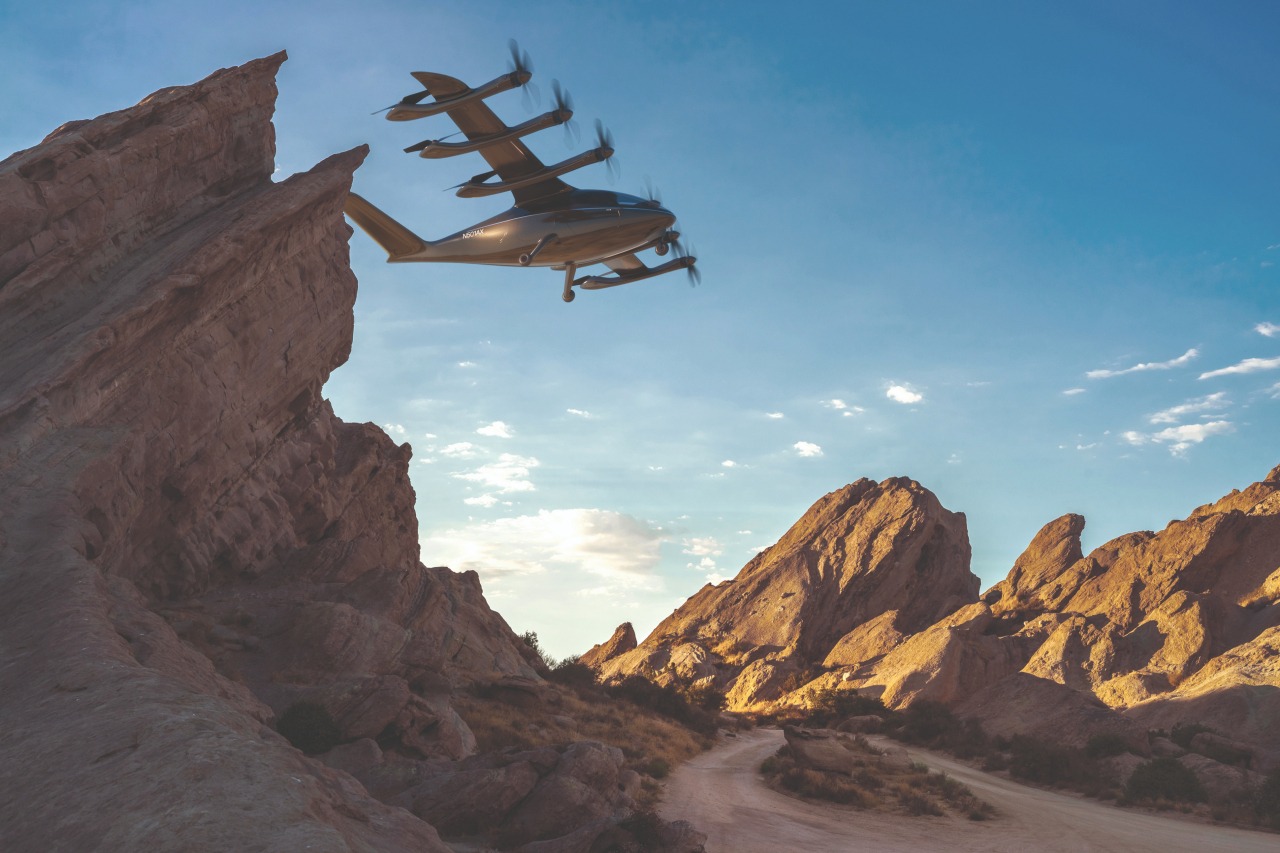 Flying cars may sound like something straight out of science fiction. But urban air mobility is poised to be a $1.5tn market by 2040 – and the future is looking up for start-ups like Archer Aviation, who are leading the race to the skies.

Briana Pagano speaks with Archer co-founder Brett Adcock to trace the journey from idea to IPO – and uncover a few secrets to entrepreneurial success.

As co-founders of the successful HR technology start-up Vettery, they’d spent the past five years scaling their business and were on the brink of a $100m exit. Now, it was time to tackle a new challenge – and the sky was the limit.

“I’ve always been inspired by companies like SpaceX,” says Adcock, reflecting on this pivotal moment in his career. “People like Elon are making the world a better place to live in and making it really exciting to wake up every morning.” Today, he’s one of them.

Hailed as “Uber of the skies”, Adcock and Goldstein’s new flying taxi start-up Archer Aviation has a $1bn purchase order from United Airlines, backing from early SpaceX investors and expert aerospace engineers on staff. But that’s only the beginning.

Scheduled to take commercial flight from Los Angeles and Miami in 2024, Archer’s electric vertical take-off and landing aircrafts will define a new age of urban air mobility – racing to the skies against competitors like Joby and Wisk in an emerging market that Morgan Stanley estimates will be worth $1.5tn by 2040.

On June 10, 2021, Adcock and Goldstein premiered their first model, called ‘Maker’, in a converted California hanger. “In nature, there are no straight lines,” boomed a video narration as a massive 3D LED screen lit up on stage.

“That’s mankind’s doing: trapped by gravity, heads down, except for the rare few. But what of the rest of us? Can we also finally be untethered? Perfectly weightless at will, soaring from place to place, riding gentle curves in the sky? How would we live then? Would we appreciate this new perspective as an open invitation to create – to connect to a better future and all that is natural around us, and all that is better within us? To explore more and live our lives with greater purpose? We say yes.”

Together, audience members watched as the sleek, autonomous two-seat aircraft soared over snow-capped mountains, red rock canyons, and long, sandy stretches of coastline. According to Adcock, innovation in aerospace is long overdue.

“With the advent of electric propulsion, you can create a new class of vehicle that is far cheaper, safer, and quieter than what exists today,” he explains. “Archer can be a piece in the puzzle of helping cities move to fully sustainable forms of transportation. We also want to help solve urban congestion so folks can spend less time sitting in soul-crushing traffic and more time with their loved ones.”

Looking ahead, Adcock and Goldstein envision a fleet of zero-emission aircrafts that can take off vertically like a helicopter, fly forward like an airplane, and land on a traditional helipad or retrofitted landing site – no airport commutes required.

Of course, Archer has a long way to go in bringing this vision to life, and Adcock recognises that many challenges lie ahead. “What we’re doing at Archer is really difficult,” he explains.

“Running any start-up is really difficult. And obviously, we’re definitely working against the odds here. But I think it’s important to take a step back and realise that it actually is possible for a company like ours to really make it. There’s a strong sense of aspirational energy around that.”

“Archer can be a piece in the puzzle of helping cities move to fully sustainable forms of transportation. We also want to help solve urban congestion so folks can spend less time sitting in soul-crushing traffic and more time with their loved ones.”

As former hedge fund analysts and HR software executives, Adcock and Goldstein may seem like an unlikely pair to lead an aerospace company. But they suggest that being outsiders has actually worked to their benefit. Above all, says Adcock, he and Goldstein are professional problem solvers.

In other words, it’s arguably not about the industry – it’s about the approach. “This is a new industry with new learnings, but one core thing is still the same: we need to clearly define what problem we want to try to solve,” explains Adcock. “We want to be able to bring the right folks in and solve those problems, and then execute really well and build a great consumer experience.”

At Vettery, he and Goldstein learned how to create a company that consumers love. Now, they’re applying the same business playbook to building Archer, focusing on the fundamentals while a talented aerospace team drives technical execution.

“Across the engineering, piloting, battery, motor, manufacturing, and supply chain organisations, we have experts in their fields who have been in aerospace for decades and really know what they’re doing,” says Adcock.

“Having that support is fundamental to making sure we’re successful.” In any industry, emphasises Adcock, entrepreneurs should follow three clear steps: “Hire exceptional people, build a great product, and execute well.”

The duo may have launched their leadership journey in HR technology at Vettery, but Adcock says that labels don’t define them. “I never thought of myself as an HR person,” he explains.

Instead, he and Goldstein simply focus on solving problems and building great products. At Vettery, that happened to mean inventing HR software that connected top talent with some of the world’s most innovative companies. “But nothing we were doing was traditional recruiting,” emphasises Adcock.

“We were in a new online marketplace format, using machine learning, doing things completely differently,” he adds. At Archer, he and Goldstein started from scratch once more: applying their entrepreneurial spirit to an entirely new problem. “It’s a totally different industry,” says Adcock. “But at the end of the day, we’re still just trying to build a great product.”

One of Adcock and Goldstein’s most significant accomplishments to date is building the Archer team. Fortunately, getting people on board doesn’t seem to have been hard. In fact, many early Vettery employees followed their co-founders clear across the country, moving from New York to California to join Archer.

“As an organisation, I think the progress you make is the sum total of your people,” says Adcock. “We’ve been very lucky to have some of the folks that really helped build Vettery follow us over to Archer. Our team is just incredible. We set out to hire the greatest folks in the world across several disciples, and what we have today is the best team we could have possibly put together.”

Adcock credits Archer’s recruiting success to a couple of core factors, the first being a strong mission. From the beginning, Archer’s reason for being was clear: advancing the benefits of sustainable urban air mobility. “It’s a new industry, so that mission is very ambitious and hard to achieve,” he explains.

“We work hard to give some of the best people in the world a chance to come in super early and build what will hopefully, over time, be a really important global business.”

From there, says Adcock, retention is a matter of ensuring employees are properly incentivised, well taken care of, and always working on important projects. “At the end of the day, people have a degree of freedom around where they want to work, so it’s really important to put them on fun projects and treat them fairly,” he emphasises. “That’s our north star.”

Beyond their history of launching companies and raising capital, one of the most remarkable things about Adcock and Goldstein is the fact that they’re still working together after more than a decade. “I think it’s really hard for founders, especially co-CEOs, to make it for a long period of time,” says Adcock.

“There are very few folks that get to the point where they’re able to successfully coexist. Adam and I are really close friends and pair well across our personal values. We also pair really well from a working relationship perspective, getting along and talking through problems or disagreements. Over the years, we’ve learned how to divide and conquer very effectively across the business.”

For Adcock, the benefits of being a co-founder far outweigh any occasional challenges. The biggest perk of all? Knowing you’re never alone. “Running a company is difficult,” says Adcock. “So having somebody with you through that journey is actually really, really, helpful. Doing it alone would be lonely. It’s unique in the start-up world for co-founders to have stayed together for this long and been successful, but it works really well for us. I think we’re always stronger as a pair.”

So, what lies ahead for Archer? Smiling, Adcock points at the futuristic aircraft that gleams behind glass in his Palo Alto headquarters. “I’m really excited about the future of cities and making urban air mobility work in
a big way here,” he says.

In an industry rife with federal regulations, doing so won’t be easy. But for the Archer team, inspiration trumps intimidation. “It’s going to take a long time, and we have a lot of work to do,” says Adcock. “We’ll start slowly, then scale up to be bigger and bigger over time. Remember, some of these successful businesses like Tesla or SpaceX have been running for two decades. We’ll be doing this for a long time.”

Like their role model Elon Musk, Adcock and Goldstein are aiming high. “I think it’s important to be solving problems, and to be making the world a better place,” says Adcock. “Beyond that, it’s important to be inspired and excited when we wake up each morning. Half of the global population lives in cities, and a lot of those people spend way too much time in traffic. We need to reinvent the entire urban experience. I’m really excited about trying to solve that every day.”

Meanwhile, Adcock and Goldstein are clearly as ambitious as ever. A week after we spoke, an Archer banner was unfurled at 11 Wall Street – marking the company’s IPO. Facing a crowd of cheering employees, Adcock and Goldstein stood side by side in the city that once launched their careers. When the clock struck 9:30am, they reached out and rang the opening bell of the New York Stock Exchange. Below them were the streets of Manhattan, where they first met over a decade earlier. Above them, endless sky.