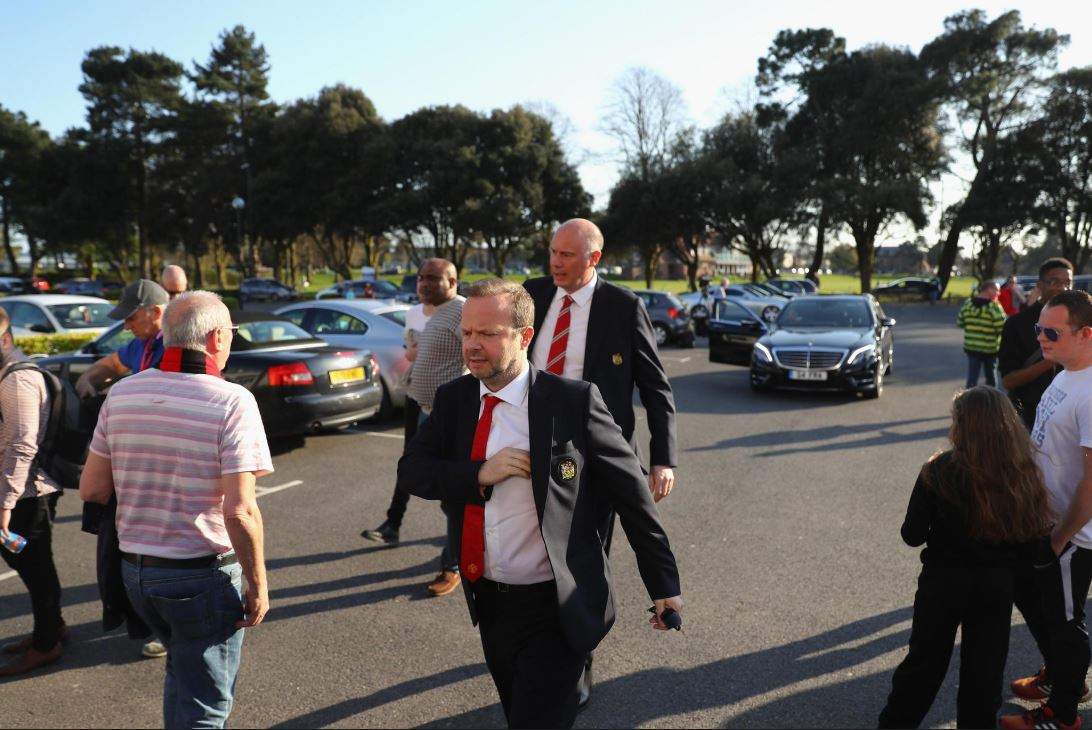 He’s the man who has transformed Manchester United’s commercial strategy but is accused by fans of holding on to the purse strings too tight – but a background check of Ed Woodward the businessman may explain why.

Having forged a reputation as an effective accountant and investment banker, the 46-year-old is now tasked with steering the ship at one of the world’s biggest football clubs as chief executive.

While he has struck up a great rapport with the club’s American owners, the Glazer family, Woodward’s relationship with current manager Jose Mourinho is somewhat cooler after disputes over transfers this summer.

It has led to widespread anger among the Red Devils’ fanbase, with some supporters reportedly arranging for a plane banner calling for him to be sacked at this weekend’s game against Burnley.

Compelo looks at his business background and how he stepped up to be Man United’s kingmaker at the centre of a propaganda battle.

Ed Woodward the businessman: Life as an accountant and banker

Born in Essex and privately educated, Woodward studied physics at the University of Bristol before taking up a career in accountancy.

He began working at PricewaterhouseCoopers – now known as PwC – in the accounting and tax advisory department in 1993, and qualified as a chartered accountant in 1996.

Woodward went on to work as an investment banker at Flemings, which was taken over by JP Morgan in 2001.

He recalled the uncertainty that many employees felt following the takeover in an interview with the fanzine United We Stand in 2014, saying: “I kept my head down, but it would wind me up when people moaned about losing their jobs there.

As part of the mergers and acquisitions team, Woodward’s milestone moment arrived when he appointed by JP Morgan to broker the deal in which Malcolm Glazer – president and CEO of real estate group First Allied Corporation – and his family bought Man United in 2005.

The family only put about £170m of their own money into the takeover, financing the rest with loans and about £265m about £265m secured against the club.

Writing for Bleacher Report in 2015, football journalist Robert O’Connor said: “the corporate minutiae that forced through the 2005 takeover was complex and delicate, and it demanded a dexterous financial wit to wrangle into being.

“Woodward … won the minds and the hearts of the Glazer family with his work to resuscitate a failing deal at the 11th hour.”

Effectively transferring debt to the club meant it was a highly controversial deal, prompting fierce protests from fans.

But for Woodward, it offered the opportunity of a lifetime.

Impressed by his work, the family offered him the chance to join the club that same year, initially in a financial planning role, before he took charge of the commercial and media operations in 2007.

Woodward played a central role in securing some of the biggest sponsorship deals any professional sports team has signed.

The club now has more than 50 deals in place, including descriptions as varied and unrelated to football as “feature film partner” 20th Century Fox, “coffee partner” Melitta and “tyre partner” Apollo Tyres.

The aggressive expansion of Man United’s commercial operation to take advantage of its truly global appeal is a model that has since been replicated at the world’s other major clubs, including Barcelona and Real Madrid.

“Fan numbers that ran into the millions weren’t converted into revenue because the brand as it was being used was too easy to counterfeit.

“The monetisation of a vast supporter base abroad has been little short of revolutionary.”

Ed Woodward the businessman: Groomed as successor to the throne

In 2012, Woodward joined the Man United board of directors and appointed to his current job title as executive vice-chairman.

But to many observers, he was a shadow to long-time chief executive and Sir Alex Ferguson ally David Gill.

He effectively began to run the business and was reportedly in contact with the Glazers in the US on a daily basis, while Gill spoke to the family once a week.

Nicknamed the Glazers’ “Chosen One” – a moniker also given to Ferguson’s short-lived managerial successor David Moyes – he eventually took full charge when Gill retired along with Ferguson in 2013.

The change in guard also prompted a new direction in the Manchester United “brand”, leading to a social media drive (an official Twitter page was only set up in 2013) that encompassed the club’s 21st century purpose.

Having been based in a Mayfair office that put him closer to the deal makers, it wasn’t long until he relocated to Cheshire so he could be closer to the manager and everyone else important.

He also continues to be the main link between Man United and the two main Glazer siblings involved with the club, Joel and Avram.

Delivering a healthy bottom line also remains his job but, as chief deal-maker, he has also had to adjust to keeping his managers happy, too – a task that hasn’t proven quite so natural for Ed Woodward the businessman.

From the moment he has taken his seat at the top of the 19-times English champions in February 2013, Woodward has been under closer scrutiny than ever before.

The first criticism that was fired his way arrived during the summer in which Moyes joined, when the chief executive managed to sign only one first-team player in Marouane Fellaini, despite an acceptance that a raft of new additions were required.

Already, fans were calling for his head after what was called a “disastrous” transfer window.

Former Everton manager Moyes – hailed as the natural successor to Ferguson, who lasted 26 years – didn’t last his first season as the club finished seventh, its lowest ever position in the Premier League era.

He was followed by Louis Van Gaal, the former Barcelona, Bayern Munich and Netherlands boss who failed to qualify for the Champions League in his second season, although he did lift the FA Cup.

With Woodward’s first three seasons not exactly going to plan, he turned to Jose Mourinho – one of the most decorated managers in the world – to try salvage the wreckage of a disappointing post-Ferguson era.

The supremo’s stock began to slowly rise as he signed Paul Pogba for £89m, a then-world record fee, in 2016 and then more big-name stars including Romelu Lukaku, Nemanja Matic and Alexis Sanchez last season.

But after Man United finished 19 points off champions Manchester City, this summer’s window was deemed crucial.

Much like his first summer, only one first-team signing arrived in Brazilian midfielder Fred, as Mourinho’s demands for a centre-back in particular fell on deaf ears.

It has led to fans stepping up protests against Woodward, with a plane banner calling for his sacking to reportedly be flown above Turf Moor for the club’s next match away to Burnley on Sunday.

He also has the future of his manager to consider, with the team losing two of their first three games – but Woodward has backed Mourinho to recover.

Ed Woodward the businessman: What next?

Despite the increasingly vociferous criticism coming his way, Woodward is believed to have the backing of the Glazer family.

Away from purely football matters, much like in his previous role, he has continued to be a success by revamping the club from top to bottom.

A women’s team has been added to the ranks, the academy and scouting operation has been restructured and the first ever director of football is set to be recruited.

Despite Richard Arnold now being in charge of the commercial operation, Woodward has still played a key role in increasing the sponsor count from 10 organisations in 2013 to about 80 now.

As The Times reported last week, the club’s share value passed the $24 (£18.50) on the New York Stock Exchange to set a record high, while annual figures are expected to match the record revenues of £581.2m posted last year.

The report said: “It would take a crisis of much greater significance to persuade the Glazers that Woodward should make way, but those close to him insist he is not bulletproof – though it would need United to show signs of a financial as well as footballing failure for that gun to be loaded.”

While Ed Woodward the football club CEO might persona non grata to Man United fans, Ed Woodward the businessman still retains the trust of those who matter – the Glazer family – and doesn’t appear to be going anywhere soon.