Wearable technology is becoming more and more prolific but in no area is it more important than health. Former children's clinician Dr Elin Haf Davies, who left her job three and a half years ago to set up medtech firm aparito, she talks to Compelo reporter Felix Todd about bringing medicine into the digital age, life as a female CEO in a male-dominated tech industry and how to enable innovation 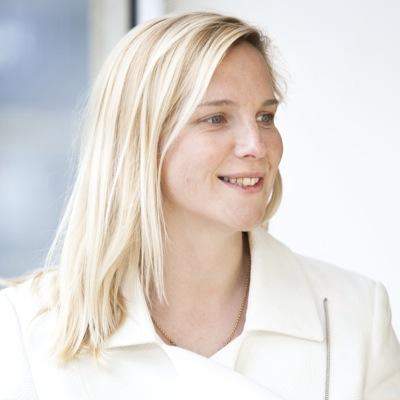 With more than 20 years’ experience in children’s healthcare, Dr Elin Haf Davies knows first-hand the importance of the work that medical professionals do every day.

She’s also aware of the limitations of a sector that hasn’t digitally transformed quite as much as others.

“Tech is everywhere nowadays but healthcare is one of the industries that hasn’t been so disrupted by it,” says Dr Davies.

“We still use some archaic methods.”

To change the situation, Dr Davies quit her job as a scientific administrator at the EU’s European Medicines Agency and started aparito three-and-a-half years ago.

Her medtech company provides wearable devices like smartwatches and mobile apps to allow patient monitoring outside the hospital, facilitating real-time communication between patients and clinicians to hasten and improve treatment for people of all ages.

“Aparito is all about recording patient generated data and enhancing the experience of a patient during a clinical trial or even during routine care,” explains Dr Davies, who was one of the winners of the Digital Festival 2018‘s Top Welsh Women in Tech awards last month.

“It’s aimed at helping us change the way we evaluate what’s important.”

Innovation where it’s most needed

Aparito is used by a wide range of companies across the globe, including the National Institutes of Health (NIH) in the US, and a number of NHS hospitals throughout the UK.

But despite now having her company up and running with a team of ten spread across Wrexham, London and Berlin, Dr Davies, like many entrepreneurs, faced huge challenges in starting her business.

“We had to try and work out how to fund it, which is hard,” she says.

“Then we also encountered the technical challenges.

“I come from a clinical background so while I had a very clear vision in my head of what I wanted, I wasn’t able to technically build it myself.”

Dr Davies was able to combine her healthcare background with the tech and marketing expertise of Ed Fried, an executive she brought on board.

He left after 18 months and she now works closely with chief information officer Chris Tyson.

Having worked on healthcare regulation for more than two decades, Chris has helped to turn Ed’s creative idea into a more regulated product.

This has been particularly crucial. While financial barriers and technological obstacles plague most new businesses in all sectors, regulation is a key consideration in Dr Davies’ industry.

It can cripple the life expectancy of medtech start-ups, with an often overwhelming number of changing rules to abide by leading to a large amount of companies never getting off the ground.

“There are huge governance regulations issues – it’s really difficult to make sure we comply with all the medical device directives,” explains Dr Davies.

Looking ahead, she concedes these issues are not likely to subside completely.

“Money is the big enabler, there’s no getting away from that – we need more investment and capital,” she says.

“And we’re never fully satisfied with the tech we have.

“You have to get something out because if you wait too long the landscape changes – this doesn’t mean we haven’t got something that works – it’s more that we want to add new things.

The landscape Dr Davies mentions is so amorphous largely due to the aforementioned regulations which change and update regularly.

Factors like a shifting political climate mean that new rules are constantly being introduced, such as US President Donald Trump’s alterations to the Affordable Care Act and Medical Device User Fee Agreements in America last year.

The aparito founder, however, feels the onus is on medtech entrepreneurs to not let this stop them.

“There will always be the frustration that regulation will never keep pace with innovation – but that’s not an excuse,” she says.

“The bigger problem is people who try to use regulation as an excuse not to do anything and that’s what drives me crazy – so as long as you consider what the ethical and regulatory implications of what you’re doing to the best of your ability, you’re fine.

“To blame regulation is lazy. If you’re transparent and honest in your efforts nobody can blame you, really.

“From there on out, it’s more about having the opportunity to collaborate and co-develop a product – and then try to look for a market to sell it to.

“I want to be a company that identifies a needed solution then finds a way to make sure patients want it, regulators are happy with it and payers will pay for it – let’s develop that.”

Nothing ventured, nothing gained

Every new business is set up at the peril of its founder.

With aparito, though, Dr Davies’ risk was particularly extreme.

The European Medicines Agency, which evaluates medical products and employed Dr Davies prior to her founding aparito, is strict about its staff members’ activity outside the workplace.

To make her idea a reality, Dr Davies had to leave her job entirely.

She says: “Everyone thought I was crazy as I was employed at a place with a great package – salary, holidays, opportunities – my mum more so than anybody thought I was mad to leave such a good environment.

“I wasn’t necessarily confident in my idea – it was more a passion to do something different.”

Dr Davies explains the importance of conducting market research but acknowledges that, as an entrepreneur, you don’t have to be intimidated by what others are doing.

“There’s a huge discrepancy between the gloss and hype and PR spin of what people say they’re doing to what actually is happening,” she says.

“If you glance at the competitors you have and what they’re doing, you end up feeling helpless because everything has already been done and they’re doing it great.

“But often what is actually happening reveals a big gap between the spin and the doing.

“So I stayed true to my own experience and went from there.”

Tech as an industry comprises a tiny proportion of female employees.

As an example, about 20% of Google’s engineers are women, and this is roughly consistent across the world’s major companies.

In medtech, specifically, just 11% of professionals in all positions are female – and in leadership roles, the proportion is 5%.

It’s one of the worst tech sectors for female employment but that hasn’t stopped Dr Davies excelling in digital health and launching her own business.

She feels, however, that more women should be doing the same.

“When you look at the facts, women are going to be pregnant and need healthcare for that, they are going to be mothers and do the mothering responsibilities of children, and they are more likely to be carers of parents than men as well,” explains Dr Davies.

“Women are more likely to be at the forefront of receiving healthcare, but aren’t the ones designing it.”

The problem is semantic, she believes, who feels that the word “tech” falsely evokes an image that young girls don’t relate to.

She says: “When they hear the word ‘tech’ they shouldn’t think – and I’m exaggerating for effect here – of a man with a long ponytail and sandals coding in a dark room – that’s not all that tech is.

“So it’s about explaining to girls in education that we need them to consider STEM (science, technology, engineering, and manufacturing) subjects in a different way.”