Of the 1.1 million tech jobs expected to be available in the US by 2024, only 45% will be taken up according to current talent rates 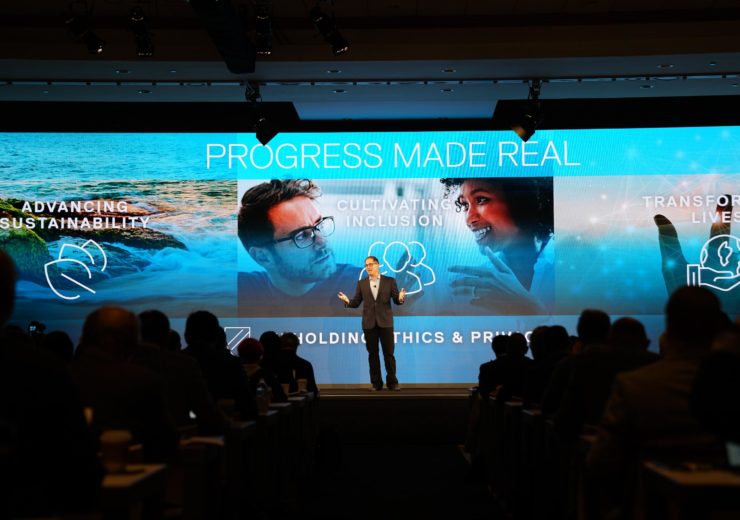 Michael Dell speaking at the Dell Technologies Summit in Austin

From a pledge to recycle an item for every product sold to achieving gender equality across the business, Dell has set out an ambitious plan to be a force for social good over the next decade. Dan Robinson reports from a showpiece event in which millennials were recognised for turning corporate social responsibility pledges from nice-to-haves to business critical.

When major tech companies bring analysts and reporters from across the world to a conference, you can bet they’re desperate to show off a shiny new piece of kit.

And while there were two big enterprise technology product announcements at the Dell Technologies Summit that will apparently make it easier to integrate data and glean it for useful applications, there were two bigger focuses at play in the Austin event.

CEO Michael Dell, the 17th richest man in the world whose foundation has given away $1.7bn to children living in urban poverty, took to the stage to set out a vision for improving sustainability and diversity metrics over the next decade.

Plans include recycling an equivalent item for every product sold, cutting emissions by 60%, achieving equal gender representation in the global workforce and increasing the number of African-Americans and Hispanics in its US teams.

Corporate social responsibility commitments are nothing new for big businesses but there was an acknowledgement from executives across the board that Dell’s 2030 Progress Made Real plan was the most important part of this event.

And there’s a good reason for this – it makes good business sense.

Chief customer offices Karen Quintos points out how there will be 1.1 million computing-related job openings in 2024 in the US alone.

“But unless we figure out how to broaden the talent pool, we will only be able to fill 45% of those based on current talent rates,” she adds.

“There’s expected to be a tech talent shortage of 4.3 million people globally by 2030.

“These challenges have changed the conversation about social impact from being the right thing to a business imperative.

“I’ve seen these conversations reach new levels for our stakeholders – they’ve moved from happening maybe once a year to everyday boardroom dialogue.

“Rather than being the last interview question, it’s the first thing prospective employees are now asking.

“Seventy-six percent of millennials are deciding whether to work for a company based on their social and environmental commitments.”

Michael Dell on his company’s employees

This last point is particularly pertinent for the man who founded Dell in 1984, taking it to a $78.7bn company at the last count.

Michael Dell claims more than half the 157,000-strong workforce are millennials – an age group whose exact perimeters is often up for debate but is generally defined as people born between the early 1980s and mid-1990s.

“Clearly, you need something important and interesting for people to buy, but inside our company it’s important that we not just have people who are engaged, but inspired,” says Dell in a Q&A session with journalists where there’s barely any talk about the new products.

“When they understand that what they do really matters and has a purpose in the world, then it’s an opportunity and responsibility we have.

“We’re doing these things voluntarily and I think more and more companies are going to adapt similar kinds of initiatives.

“The thing I’ve observed with millennials – the generation that is my kids’ age – is a number of them have skipped the whole doing well and have gone straight to doing good.

“In my generation, you would do well and then you’d do good, and if you did both together then that was considered a great thing.

“Young people are using their creative energies and talents to solve some of these big challenges that are out there, which is pretty inspiring.

“We’re a company that can join in the fun and help address some of these big challenges and, in the process, become a more attractive place for talent.

“Our engineers get quite motivated by these because we’re not just going to make things but make things that are better for the world in their environmental footprint – whether it’s in packaging, energy consumption or the use of materials.”

The series of commitments made by Dell to achieve a positive social impact over the next decade form part of the 2030 Progress Made Real plan and has four pillars – advancing sustainability, cultivating inclusion, transforming lives, and upholding ethics and privacy.

Alongside the 1:1 ratio for recycling against product sales, the company wants to use 100% recycled materials in all packaging, lead a circular economy philosophy in which products are designed so they can be reused, and cut carbon emissions by 60% per unit revenue.

And hitting the magic 50% mark for women in the business is complemented by a proposal for 40% of people managers to be female.

In the US, 25% of the workforce should be African-American or Hispanic by 2030, and this ethnic group should account for 15% of managers.

Additionally, Dell has made a bold promise to advance the economic, health and education opportunities for a billion people through its work.

The 2030 strategy follows a similar vision outlined a decade ago for 2020, containing goals the company claims it has already achieved or exceeded in most cases – although executives did not have details to hand about which ones it had not yet fulfilled.

It also comes hot on the heels of Business Roundtable – a group comprising CEOs of the largest companies in the US, including Dell – redefining the “purpose of a corporation” in an open letter in August.

Michael Dell says this played an important role in drawing up the Progress Made Real plan, which is built on a “recognition of what we’ve known for a long time, which is the impact Dell has on the plan is very significant”.

“It stretches us to create new things, just like our 2020 goals did almost a decade ago,” he adds.

“We don’t exactly know what’s going to make it happen but we I’ve seen is when you challenge our 20,000 engineers, scientists and PhDs, they aren’t scared but excited by the challenge.

“Humans are pretty good at course-correcting to avoid impending disaster and so I think more companies are stepping up with goals like this for themselves.

“We don’t have all the answers of how we’re going to do it but that’s our goal.”

When compiling research for the Dell Technologies Summit, Brian Reaves’ team found a job advert for the company from 1994 that encouraged people to apply whatever their race, age, colour, nationality, gender or disability.

The company’s chief diversity and inclusion officer says: “Our ethos has always been to get the best talent, which exists everywhere.

“Companies with the best talent will win and that talent comes from a diverse group of mindsets.

“There are 7.7 billion people in the world and half the population are women.

In the US, there are recognised “historically black colleges and universities”, which primarily served the African-American community before the Civil Rights Act of 1964 but are now part of the federal Minority Serving Institutions Program.

Dell has worked alongside these establishments to change the curriculum in order to deliver the appropriate education needed for current and future tech jobs, covering everything from AI and machine learning to cyber security and design thinking.

There are also programmes in other parts of the world, such as Europe, while Reaves points out there’s plenty of untapped talent in the form of women who leave jobs to raise a family and want to return to the workforce.

He’s also keen to ensure these produce the right type of tech people.

“We, as an industry, must recast what technology is. It’s not sitting in a cube with your head down and coding, it’s about what that technology will do to touch people’s lives in a positive way.”

And while Dell has some new products to show off, it’s this pledge to be a force for good that is mission-critical right now.