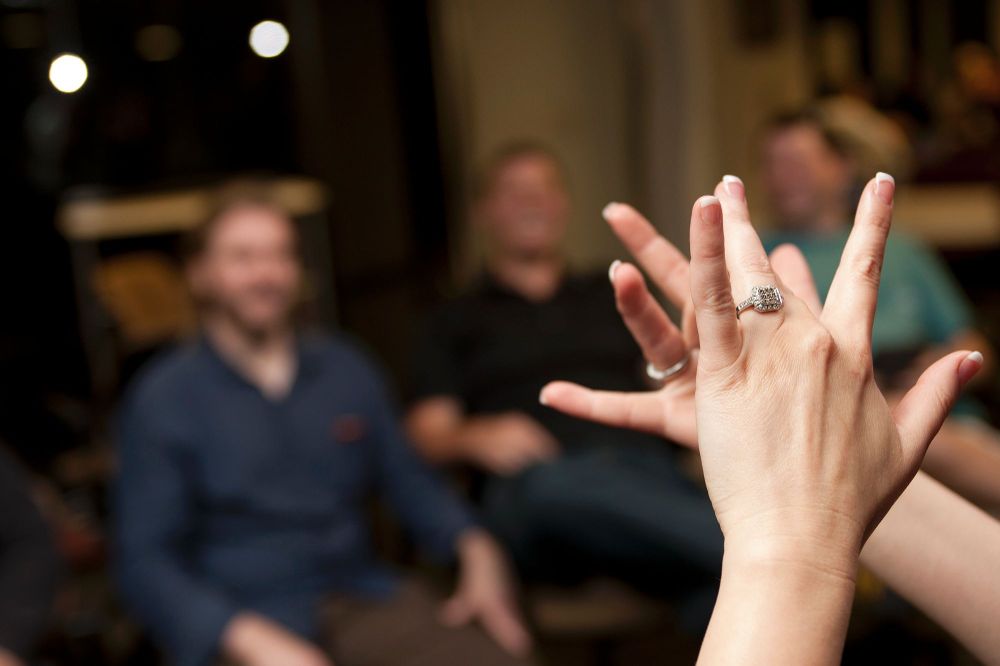 Part of CSD's mission is to connect businesses with deaf talent (Credit: CSD)

Many people who are deaf or hard of hearing can often face adversity in life, especially when it comes to finding employment. Davin Searls, community and corporate partnership manager at Communication Service for the Deaf, confronts some of the myths that can prevent people with hearing impairment from being hired. Peter Littlejohns heard him speak at a conference hosted by technology firm Splunk and reports on some of the key takeaways from his talk.

About 466 million of the world’s population are deaf or hard of hearing, according to the World Health Organisation.

The US is home to roughly 6%, or 28 million, of the Deaf community.

UK government statistics exclude those who haven’t looked for work within the past four weeks from the category of unemployed.

While the distinction “not in the labour force” includes deaf people with a logical reason not to be in the workplace, such as students, parents, caretakers and the retired. Just 24.2% of people without a hearing impediment fall within the same category, with an unemployment rate of 3.4%.

Davin Searls, community and corporate partnerships manager at Communication Services for the Deaf (CSD) — a non-profit organisation that promotes the value of deaf employees — says the disparity is far from being a reflection of deaf talent and adds an example of the damaging assumptions the community faces.

He says: “There’s this young deaf guy that went to a great college. He applied for a summer job to work with troubled youth at a camp that helps them learn survival skills, like building campfires.

“They offered him the job, and right before he went to start, they called him to work out some details of the position.”

Unable to hear the voice of his would-be employer, the individual contacted the company and told them he was deaf, so they’d have to contact him through a relay service — a software that translates speech into text on a call, and vice versa.

“The company rescinded the offer of employment,” he adds.

Early life presents a challenge to deaf children — 95% of whom are born to hearing parents — because from day one until they’re old enough to learn sign language, they have no way to communicate with their parents, resulting in a delay in language acquisition.

According to Searls, this means they start at a deficit compared to hearing kids, because they miss out on incidental learning — the knowledge obtained by interacting with the world and its citizens.

Despite starting to acquire certain knowledge later in life, many examples on the CSD website prove deaf people are just as capable as their hearing peers of excelling in a career — even in science, technology, engineering, and mathematics (STEM) fields.

In a video accompanying the presentation, NASA electronics engineer Johanna Lucht is among those who show deaf people can succeed in a STEM career.

Yet, according to Searls, the field can be tough to break into for the deaf and hard of hearing, something he shows through another example.

He says: “There’s a young woman who went to one of the top nursing programmes in the country.

“She did her residency at one of the university’s hospitals, where she was loved by her patients and her boss.

“She wanted to work full time there after graduating, and this hospital makes billions in revenue.

“She graduated, applied and was offered the position.”

Much like Searls, she was excited to start the job and let the hospital know she’d need an interpreter.

“As soon as she said that to them, they went ahead and said it’s too expensive, plus you’re a threat to the patient’s safety — and they rescinded the job offer,” he adds.

“That person was my sister.”

Lauren Searls sued the hospital and found a position elsewhere, but Davin says employer discrimination can be worse for women and black and minority ethnic people, as well as those within the LGBT community.

What’s stopping employers from hiring deaf people in the workplace?

According to Searls, one of the main barriers to employing deaf people is communication and the fear that enabling them to communicate with colleagues will carry a high financial cost.

“Lots of people think that if they bring a deaf person in, they’ll have to pay for an interpreter, which is expensive.

“But in today’s world, talking to each other over an instant messenger is much easier than having an interpreter.”

Along with using technology to aid the communication of deaf employees, he says businesses need to evaluate their performance to see where accommodations could be made to make their role easier.

One example he gives is a large distribution company he worked with as a consultant on deaf employees.

In this case, the company found its deaf employee wasn’t achieving the same numbers of packages processed in its warehouse — a task staff carried out with a handheld scanner.

Through investigating the workflow of the employee, the company found they weren’t able to hear the beeping sound that confirmed each package was scanned — which was slowing their work down.

The solution the business applied was to provide the staff member with a new scanner, which vibrated along with the beep — shortly after, the employee’s performance stats shot up.

The company, in this case, was open to going the extra mile to ensure their employee could perform the role, and Searls is aware that, in many cases, businesses will need to do just that if they want to become an inclusive employer.

“There are so many companies that I interact with that tell me they’re not ready — to that I say bullshit, it’s a mindset.

“You can’t just say you’re ready on paper, you have to do something.”

What can businesses do to attract and retain deaf people in the workplace?

Many companies now recognise the value of diversity and inclusion in their business, with Amazon, Boeing and the US Internal Revenue Service among those with several deaf employees.

To show the value of deaf employees in a business, Searls says companies need only think about the experience of their end-user, some of whom will be deaf.

“If you say that you value your employees, and you find out how many deaf people are using your products, and yet you don’t have any deaf people as employees — you’re missing out on understanding how you can better accommodate them as customers,” he adds.

To attract and retain deaf employees, businesses need to consider areas of their day-to-day operations where they may need to make adjustments.

A key consideration is meetings, where people talk over each other at times, something that can make it hard for employees with hearing difficulties to contribute.

“If you have a deaf person sitting in the meeting with an interpreter, and they have a delay in hearing what’s been said and communicating it through sign language — by the time the deaf person wants to comment, the time has already passed,” says Searls.

“Also, as a deaf person, if I have to watch an interpreter and read a Powerpoint, it’s really hard for me to do both at the same time.”

While it’s difficult to address the first issue with more than a little extra consideration from other employees, Searls recommends that businesses hand out presentation materials beforehand, so that deaf employees can arrive clued-up and don’t have to juggle reading and watching the translation.

The CSD works with organisations to evaluate where they may need to make adjustments like these — encouraging them to go beyond the bare minimum required to be inclusive, but make the workplace experience as close to equal as possible for all staff.

“For every can’t, there are plenty of cans. You can find your way around any can’t.

“Diversity is like being invited to a party, inclusion is being asked to dance, and true equity is also being able to pick the music.”