Charles Delingpole is the brains behind The Student Room and fintechs MarketInvoice and Mimiro - but he attributes a stint as an investment banker in between those two companies for giving him the tools to succeed as an entrepreneur, as he tells Dan Robinson 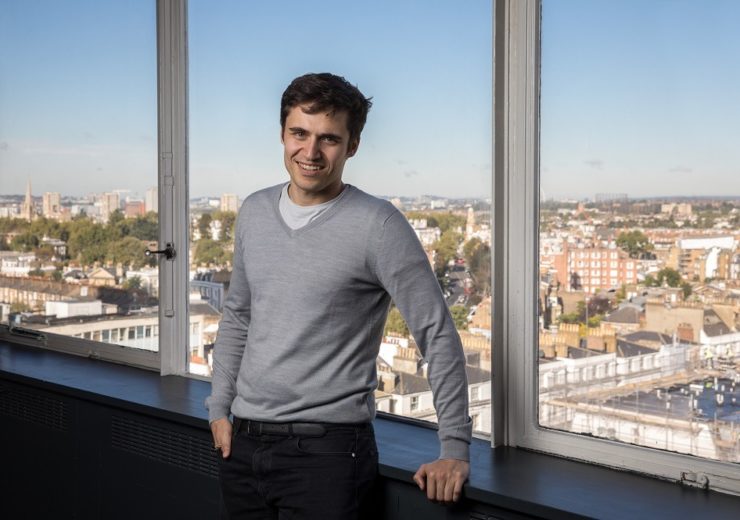 From entrepreneur to investment banker, and entrepreneur once more, isn’t exactly a well-trodden path for many tech company founders – but getting his shoes a bit muddy helped Charles Delingpole.

At 36, he’s already on his third venture, having set up The Student Room as a 16-year-old before selling it.

Yet it’s the three-and-a-half-year stint at JPMorgan he cites as the most important training ground that led him to set up London fintechs MarketInvoice and Mimiro – two companies backed with almost £80m in funding since the start of the year.

“I don’t think I would have done what I have if I didn’t do that job,” says Charles, a Cambridge graduate whose sole focus now is being CEO of AI financial crime detection platform Mimiro.

“The level of thinking and sophistication was a great experience. People who work in banks and consultancies before starting their own company tend to do well because they have an understanding of the market and the niche.

“What I’ve done, by starting off as an entrepreneur and then going into banking before coming back out, is really rare because it’s brutal and you have to take that level of hard work.

“It’s highly unattractive from a working hours and lifestyle point of view, but it was transformative for me.”

How Charles Delingpole set up The Student Room

In Britain, the GCSE academic qualification is the start of the transition into real life as students narrow down the subjects that most make them tick.

But for Charles, it was everything he did around his studies that set him up for the business life he would lead.

Right in the midst of the internet boom in 1999, aged 16 and having taught himself how to build computers and use code, he had set up numerous websites all aimed at students.

They included essay databases, revision notes and e-learning resources – but Charles decided to merge them all into one domain, naming it The Student Forum.

It is now the biggest student forum in the world, filled with message boards about everything from the best university accommodation to addressing relationship worries – yet in the first couple of years, “it was dead”.

“As we got more content and an SEO presence, we built a community,” recalls Charles, who was born in Birmingham and went to boarding school in Warwickshire from the age of six.

“That powered all the different university students knowing about it.

“Without much investment, it gained quite a bit of scale. People who were applying for university were reading up about every aspect of the experience.

“It’s a forum for people who can get information and understand how to access other universities and schools.

“This creates a level playing field for people who don’t have the right connections to get to other institutions they want to.”

Charles ran The Student Room while studying for a double first-class honours degree in politics at the University of Cambridge and a master’s degree in management, strategy and finance at London School of Economics.

After graduating in 2006, he decided against taking the company forward and instead sold it “for not a particularly large amount”.

“It was launched before Facebook,” he adds. “But while Facebook was winning the Olympics, we were still doing the egg and spoon race.”

Revenue is now around the £6m mark, there are 70 staff based at its Brighton headquarters, and it claims to be used by 70% of all students every year.

Why Charles Delingpole moved into investment banking after The Student Room

Charles, who remains on the board and still has some shares, decided it was best to feed his entrepreneurial ambitions by actually moving into a large company as a member of staff.

He chose to join JPMorgan as an investment banker specialising in technology, media and telecoms.

“I realised I was ignorant of running a company so went there to work with tech and media businesses on financing and acquisitions.

“It helped me understand how people bought and ran them, as well as things like law, strategy and finance.

“But I knew that at any given point, I could start something new.”

His time in the City wasn’t for the faint-hearted, explaining: “I was working until 3am every night, getting four hours’ sleep and working at weekends.

“It wasn’t a stable lifestyle but it was a great place to be.”

Still, however, Charles was always thinking about business ideas to go back out on his own.

While helping businesses secure investment at JPMorgan, Charles began to scope out companies he could potentially buy with university friend and fellow City worker Anil Stocker.

But there were none they considered attractive enough and the duo instead came up with the idea for MarketInvoice, an online finance platform that helps small businesses to speed up cash flow.

It provides invoice finance software that enables companies to collect money they are owed by customers quicker than normal, while also offering small business loans.

Set up in January 2010, MarketInvoice arrived on the scene around the same time as other disruptors to the financial services industry, including Crowdcube and Funding Circle – before the word “fintech” had even been coined.

“The technology wasn’t very technology-focused and any loans were over-collateralised.

“The experience was bad and the whole SME lending space was badly developed, so we thought we had a big market to make it more effective.

“But it wasn’t called fintech, it was just that banks had poor technology and we realised we could surely do better, even though we had no background in creating a platform.

“Starting a regulated company that provides all the funds through technology, is commonplace now but, back then, it was quite radical.”

Starting from scratch made its early days a slog for the two co-founders. In the first nine months, they lent £1m to companies – which may sound like a large amount, but it only returned £25,000 to £30,000 in profit as reward for relentless hard work.

At some point along the way, fortunes turned and volume began to scale, with loan values increasing each month by the million at least.

It was an exciting period and, in 2011, then-Shadow Business Secretary Chuka Umunna described the company as “the lifeblood of the lifeblood of our economy”, adding it was “turning straw into gold” by converting payment promises into solid cash.

Barclays was one of the banks to begin redirect any invoice financing leads via MarketInvoice and it was one of the main backers, alongside Santander’s fintech investment division Santander InnoVentures, in a Series B funding round worth £26m alongside a £30m debt facility announced last month.

To date, the company has loaned more than £2bn to SMEs, employs 100 people and has a turnover of about £5m.

Once again, Charles was soaking up knowledge, this time on aspects such as dealing with defaults, fraud and money laundering risk, and customers.

And this experience stood him in good stead for when the next opportunity came knocking at the moment he decided to leave MarketInvoice – where Anil remains CEO – in early 2014.

Charles Delingpole on setting up Mimiro

A problem with a Russian family, a £1m sum and a Jersey bank account that involved the invoice financing platform awoke him to the perilous waters of money laundering and fraud.

Charles wondered whether the money trail could be dirty and tried to help the client find out where it came from.

He soon realised there was no easy solution to work out who was sitting on the other side of the table when dealing with anonymous entities.

So his exit from MarketInvoice coincided with the launch of the AI financial crime detection platform ComplyAdvantage – which was rebranded as Mimiro this year.

Charles says: “People in the industry were saying compliance was an issue. It was the biggest growth area in finance, and the biggest area within that was money laundering.

“It became a big issue after 9/11 as George W Bush realised the best way to strike terrorists was through their pockets.

“So there was a step change in legislation to stop Al Qaeda getting hold of funds but, as a lot of the technology was built in 2001, it’s a bit dated when we now have data intelligence and machine learning.

“It’s important for businesses because can handle millions of pounds from people they’ve never met and if they get a default, they don’t know what to do.”

Mimiro, which is billed as the first platform of its kind to target SMEs, claims to help companies “fundamentally change how they assess who they’re doing business with” by using machine learning technology to analyse the risk of financial crime.

According to Mimiro, it can spot tens of thousands of “risk events” from scouring millions of structured and unstructured data sources using self-improving algorithms every day.

These include registers of high-level national and international sanctions, individuals who should be treated with caution, and adverse media coverage.

Mimiro then builds a holistic snapshot of an entity’s risk in real time, and spots nuanced patterns across users and transactions that would elude a human assessor.

Clients can also tailor the software to focus on parameters that are particularly relevant to them. On average, the company claims to reduce the rate of false positives by 70% across its client base of 350 SMEs.

What does the future hold for Charles Delingpole?

Charles regards creating Mimiro as an amalgamation of his career to this point, having cherry-picked his experience in merging various databases at The Student Room, the multi-tenanted platform created at MarketInvoice and the commercial knowledge gained at JPMorgan to build his latest venture.

Having landed on a solid product now, the company has doubled its Notting Hill-based team to 160 in the past year and recently secured $30m (£23m) in Series B investment led by Index Ventures and Balderton Capital to add to the $8.2bn (£6.3m) it received in 2016.

Index partner Jan Hammer, who has previously led his firm’s investments in payments platform Adyen and cryptocurrency investment platform Robinhood, has joined the Mimiro board as part of the deal.

Charles says there are plans to have 400 staff by the end of 2019, adding: “The game plan is to solve all the problems with fraud, ID and credit.

“The cool thing we’re doing is with the data and we want to improve the efficiency and effectiveness so we don’t miss any names or get any false positives.”

While there’s no doubt Charles is fully focused on the task at hand, his track record suggests that at some stage in the near future he may look to move on and start again.

It must also be tempting at times to look back at his achievements from time to time, but Charles couldn’t be clearer in his thoughts on both ideas.

“Everything Jan has done has been extremely successful so his expectations for us are very high for us to grow – we’re expecting to triple every year.

“What we’ve achieved is still pretty tiny and, the thing with Series B funding is, as soon as you get a new investor, it’s a new baseline.

“They don’t care what you’ve achieved in the past – they’re just interested in what you do in the future, so the next 24 months will be very intense.

“I doubt I’ll get another opportunity like this again in terms of the number of people in the team, clients that rely on you and investors putting their faith in us, so the responsibility is huge.

“Hopefully I have some relevant experience that will help but as far as I’m concerned, everything starts now.”