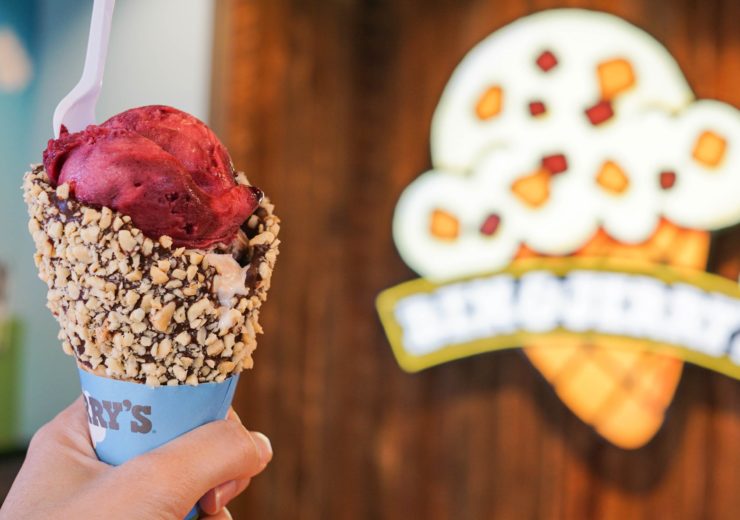 With diverse flavours like Birthday Cake and Chunky Monkey, Ben & Jerry’s is loved the world over (Credit: Shutterstock)

Ben & Jerry’s, the Vermont-based ice cream extraordinaire, creates a range of iconic flavours including Chunky Monkey, Half Baked and Phish Food. CEO Journal editor Stephen Hall spoke to Jostein Solheim about how the dessert brand has sustained its legacy of activism and philanthropy over 40 years.

Like all strange and wonderful journeys, Jostein Solheim’s path to becoming CEO at Ben & Jerry’s was not a linear one, but neither is the history of the company.

Ben & Jerry’s was created in the twilight of the 1970s, after the hippy philosophy had left a powerful mark on US art, music and literature.

Elements of this counterculture remain within the organisation to this day, maintaining the influence of its non-conformist co-founders.

Imagine Whirled Peace, Save Our Swirled and Bob Marley’s One Love, for example, are all flavours that are motivated by the company’s public-spirited values.

After it was formed – with just $12,000 of investment – Cohen and Greenfield wrote an unusual three-part mission statement: to create great ice cream, to operate the company on a “sustainable financial basis of profitable growth”, thereby increasing value for its stakeholders, while growing employee opportunities, and to make the world a better place.

From those humble beginnings, its ice cream would be named the best globally by TIME magazine and endorsed by successive presidents.

As the company enjoyed astronomical success, Cohen and Greenfield continued to champion causes, such as racial equality, fair trade, sustainability, LGBT rights and an increased awareness of climate change, all while paying workers at least twice the national minimum wage.

As this unusual ice cream business was growing in stature and introducing eccentric flavours to the world, including Cookie Dough and Karamel Sutra, its future CEO was embarking on his own journey of personal growth, which would lead him to the helm of the multinational giant.

Befitting of a man running a company with a commitment to conscious capitalism, Solheim has acquired a socially aware view of the world, influenced by his upbringing in Norway – one of the most progressive and equitable countries worldwide.

This viewpoint has also been shaped by formative years studying in Canada at the United World College (UWC), an institution founded with the aim of promoting peace and sustainability through education.

Solheim says this time was pivotal to shaping his outlook on the world.

At the UWC, he was employed as a social worker at a maximum security youth detention centre, which widened his perspective and enhanced his leadership style.

“When you hear about the extreme situations that those kids had to face, it teaches you a lot about empathy and connecting with everyone around you, irrespective of what they are doing and what they have done,” Solheim explains.

“You learn a lot about redemption and the need for people to be able to thrive in  a safe environment and be the best version of themselves.

“That drives my ethos, which is based around empathy, empowerment and a belief that trust is something that you give, and people, in general, step up to that plate. That’s probably the biggest thing I’ve learned.”

“It’s an interesting analogy to look back because, of course, it’s quite an extreme environment.

“You learn a lot from those kids and the challenges they have faced, and from some of the things that have resulted in their psyche and their world view.”

After this transformative period, his next stop would be the UK.

Here, he completed his undergraduate degree in Southampton, followed by a postgraduate degree at the London School of Economics and Political Science (LSE), where Solheim met his future wife.

He subsequently joined Unilever and this move would take him on an 18-year journey through the Netherlands, Sweden, Germany, Italy and eventually the US.

Ben & Jerry’s gets taken over by Unilever

While his career trajectory was developing, Ben & Jerry’s had been on unstable ground.

The company’s unconventional management style meant stock had fallen from almost $34 per share in 1993 to $17 in 1999.

As a result, it was sold to Unilever in 2000, drawing criticism from fans of the business who felt that the left-leaning, community-focused ice-cream maker had sold out to an international conglomerate.

Cohen responded to the barrage of condemnation by quoting Jerry Garcia, the inspiration for the popular Cherry Garcia flavour and lead singer of his favourite band the Grateful Dead: “Once in a while, you get shown the light in the strangest of places if you look at it right.”

The agreement did come with limitations imposed by its founders.

Ben & Jerry’s would continue to operate independently and maintain its ethical mission, with 7.5% of profits put aside for good causes, and a separate board would be established for its social responsibility goals.

A decade later, after numerous managerial positions at Unilever, Solheim’s path finally converged with the popular company, when he was appointed as its CEO.

“It was somewhat fortuitous that the Ben & Jerry’s job came up.

“Somebody came to me later and said, ‘You’re finally doing a job that’s perfect for you. You’re obviously running Ben & Jerry’s as a social justice company.’ It’s quite unique.”

“It has further transformed my outlook on the world and what we can do with business. So having done on average two to three years per job, I’ve now been CEO for eight years here in Vermont and I’m thoroughly enjoying it.”

Since Solheim stepped into the role, the business has continued to champion social responsibility causes, including justice for refugees, marriage equality and world peace.

“We are looking at supporting the organisation of a real grassroots movement to restore the moral community fibre and leadership in America, and there will be a series of actions in the next 18 months to re-engage people in our democracy, putting the rights of underprivileged people and our communities front and centre,” Solheim reveals.

As a result of these initiatives, the business became B Corporation-certified in 2012.

This select group of admired companies was set up by the non-profit organisation B Lab to recognise businesses that meet high standards of social and environmental performance, accountability and transparency.

“We’re proving that many companies can do this. There are thousands that have gone through the process and it’s adaptable to all industries,” he explains.

“You can incorporate legally as a B Corp, but to be certified you have to reach a certain minimum standard and then you’re assessed on your impact on the community, the environment, workers and shareholders.

“Then the other part of this is governance, and I think board governance matters.”

Ben & Jerry’s was something of a pioneer in this space – 18 years ago the company created an agreement to put an independent board of directors in place to oversee the social mission of the brand, which is entirely independent of Unilever.

This panel has the power to stop any actions taken by the CEO that it deems will undermine the integrity of the brand and the business.

“That’s really a sort of extreme version of an equal governance model, where you have a director who oversees, and ensures that the company is acting in accordance with the B Corp philosophy, and delivers on its social and environmental impact,” Solheim says.

“As we’re working through this now, we’re able to certify giant companies to become B Corps. This is a very strong movement that continues to evolve and develop.”

A new normal for business

This ethos looked somewhat unusual 30 years ago, but it’s a strategy that is becoming commonplace, as businesses face greater pressure to have a positive influence on the world.

In 2015, a Nielsen survey found that 66% of customers say they will pay more for a socially responsible product.

Consumers are increasingly demanding transparency and expect businesses to do more than just make a profit, and Solheim believes it’s imperative that companies incorporate this notion of social responsibility into their commercial strategies.

“It’s happening because it has to happen,” he states.

“If you want to have talented people who will drive your business and be part of this revolution that is happening right now in the digital age, where things are much faster paced, companies have to step up and recognise their role and their responsibility to society.

“Empathetic leadership that truly creates an environment where people can thrive and be empowered is just so critical.

“The old command and control model is obsolete in the next digital age, so I do think that it’s coming full steam into business.”

As this brand of benevolence makes headway in various industries, companies must combine empathetic and appreciation-based leadership with strong performance cultures.

But how does Ben & Jerry’s manage the tension between profit and compassion?

“We are very performance orientated and believe any resources that are wasted are undermining our ability to positively impact the world,” Solheim says.

“Hence we operate with some of the best operational efficiency in our factories.

“We have incredibly efficient and high return on investment (ROI) marketing campaigns because people are really committed to delivering, all within a framework that is purpose-led, mission-driven, and with a set of empathy and appreciation values built in.

“So, I think that as we’re moving into the next phase of business, this is going to be critical.”

Of course, Ben & Jerry’s wouldn’t hold nearly as much influence without its range of popular products.

There are currently more than 50 flavours on sale and, over the years, the company has created over 150. With so many varieties to choose from, does Solheim have a favourite?

“Ice cream always has a nostalgic element to it and, for me, Chunky Monkey was my first ever Ben & Jerry’s experience, and it still remains one of my favourites,” he enthuses.

“I’ve also recently discovered the beauty of non-dairy, and the new range is really fabulous.”

In addition, an estimated 1.3 million free cones were handed out worldwide to customers to mark the occasion.

To maintain its global popularity, the organisation’s food scientists will toil to create the brand’s next whacky new flavour.

And as Solheim leads the company during this historic year, his team can reflect on the growth of an ice-cream business with a heart, as they strive to build on the vision of two men with $12,000, a gas station and a mission with a difference.

This article originally appeared in the 2018 edition of CEO Journal. The full issue can be viewed here.