As revealing statistics show, the United States and UK lack BAME business leaders. But Dorothy Musariri looks at how some of the world's largest companies, including Yahoo!, PepsiCo and Starbucks, have role models with CEOs and senior bosses from black, Asian and minority ethnic backgrounds 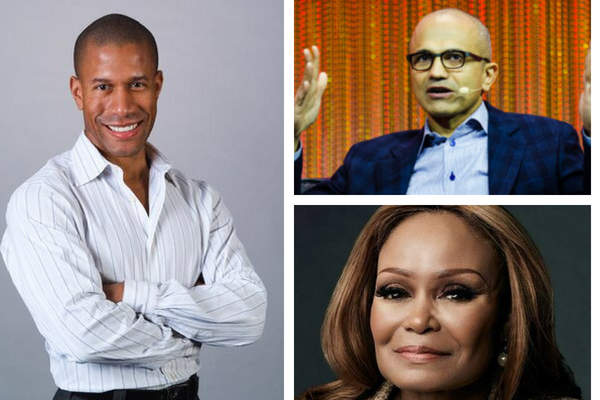 From Yahoo! to PepsiCo, and Microsoft to Starbucks – some of the world’s biggest companies are run by black, Asian and minority ethnic (BAME) business leaders.

They are key role models for younger people from similar backgrounds to show what can be achieved in the face of social barriers.

Despite major advances in western attitudes towards race over the past century, BAME groups are still hugely underrepresented in corporate America and the UK.

According to analysis by The Colour of Power, about 97% of the UK’s most powerful people are white.

Fewer than one in ten senior positions in the UK are currently held by BAME members, and only half of FTSE 100 leaders are regarded as “actively championing” diversity, according to a study by the Chartered Management Institute.

In the United States, racial diversity could also be improved significantly – particularly in executive roles.

There have only ever been 15 BAME CEOs in the history of the Fortune 500 and only five are still in their roles.

Black men and women account for 4.7% of executive board members in the Fortune 100.

In smaller companies, they hold an estimated 6.7% of the US’s 16.2 million senior jobs, according to figures from the Bureau of Labor Statistics.

While these numbers don’t paint the best picture of corporate America and Britain, these 15 BAME business leaders show that anything is possible, for anyone.

The 59-year-old was also the leader of the STEM programme at the White House from 2009 to 2016, after she was appointed by former US President Barack Obama.

In 2014, Satya Nadella succeeded Steve Ballmer as CEO of Microsoft.

He joined the company in 1992 and has held numerous roles, including executive vice-president of Microsoft’s Cloud and Enterprise Group.

He also holds a master’s degree in computer science from the University of Wisconsin-Milwaukee, US.

John Thompson is the chairman of Microsoft.

He was previously CEO at technology company Virtual Instruments, a vice president at IBM and the former CEO of software company Symantec.

He later became an independent director on the board of Microsoft and, in February 2014, was named the chairman of the board, succeeding Bill Gates.

John led the search for Microsoft’s next CEO, Satya Nadella.

In 2010, he was recognised for his commitment to education in Silicon Valley at the Silicon Valley Education Foundation’s 2010 Pioneers & Purpose event.

Rosalind Brewer is the COO of Starbucks and former president and CEO of Sam’s Club – a division of Walmart.

Rosalind was the first woman and the first African-American to fill the role of CEO at one of Walmart divisions, before she stepped down last year.

The law graduate previously had a 22-year career at personal care firm Kimberly-Clark Corporation, starting as a scientist.

She advanced to president of the hygiene and medical segments company Global Nonwovens Sector in 2004, before her move to Walmart.

Josh Rathor is the founder and executive of Nottingham-based student discount platform UNiDAYS.

It is one of the UK’s fastest-growing tech companies and, as of February, had more than ten million users and four million app downloads across 114 countries.

The company has offices across the world, including New York and Sydney.

In 2017, Josh was named the UK’s “rising star” in business at the EY Entrepreneur of the Year Awards.

The former Apprentice contestant Bianca Miller-Cole has gone on to become an award-winning entrepreneur.

After finishing runner-up on BBC’s The Apprentice in 2014, she went on to set up her diverse hosiery product line named Bianca Miller London, which launched in 2015.

In 2016, she was awarded the prestigious “Power Profile” by LinkedIn as one of the top 10 most powerful leaders on the website – a list chosen from 20 million members in the UK and made up of names such as Richard Branson, James Caan and David Cameron.

She also founded The Be Group, a consultancy specialing in personal branding, image consultancy and employability skills training.

The company has worked on several campaigns, including for Microsoft and EY.

Indra Nooyi is the chairwoman and CEO of PepsiCo, the second largest food and beverage business in the world by net revenue – standing at $63.5bn (£48bn) last year.

When she first began her career in India, she held a product manager position at pharmaceuticals giant Johnson & Johnson and textiles firm Mettur Beardsell.

In 2015, the 62-year-old ranked second in Fortune’s Most Powerful Women list.

Jerry Chih-Yuan Yang is the co-founder and former CEO of Yahoo! Inc.

He has always had an entrepreneurial mindset from a young age.

While at university, Jerry and his friend David Filo started a company called Jerry and David’s Guide to the World Wide Web – which consisted of a directory of other websites.

As the company grew popular, the pair renamed it Yahoo! Inc.

He is currently a board member for the likes of Yahoo!, Cisco, Alibaba Group and Stanford University, and has a net worth of $2.7bn (£1.59bn)

An educator, ambassador, businesswoman, entrepreneur and author – Janice Bryant Howroyd is well known for building her own billion-dollar company.

She is the CEO of The ACT-1 Group – one of the largest privately-held, woman-owned workforce solutions companies in the US – and had an estimated net worth of $420m (£322m) in 2016.

In 2011, she was given the National Association of Women Business Owners Hall of Fame honouree.

She also received the BET Honours Entrepreneur award in 2008 and Black Enterprise AG Gaston Award in 2016.

Torrence is a Harvard Business School and Stanford University graduate.

He is currently the vice-president at Google’s Global Agency Sales and Services arm – where he is in charge of marketing and advertising.

Prior to working at the tech giant, Torrence held a senior agency leadership positions with public relations companies WPP and Publicis, and marketing and tech agency Digitas.

He has received awards from organisations including the Financial Times, UPstating Power List, Top 100 Most Influential Black in Corporate America.

Kenneth is an American business executive. He was CEO and chairman of American Express from 2001 until 2018, a role that made him just the third black CEO of a Fortune 500 company.

Kenneth began his career as an associate at a law firm in New York City.

He joined American Express in 1981, working in the strategic planning group and, after being appointed CEO 20 years later, was said to be taking home around $22m (£16m).

She was previously chairwoan of the Morgan Stanley Foundation for a few years.

In her current role, Carla is responsible for increasing client connectivity and penetration to enhance revenue generation across the firm.

Before joining Morgan Stanley, she received an MBA from Harvard Business School.

Herman is the vice-chairman of property firm JLL’s Americas region.

He has worked for the company for 29 years and has held different roles within the firm.

Herman founded its public institutions business unit, which specialises in delivering real estate solutions to the federal, state and local governments, as well as economic development and non-profit organisations and higher education institutions.

Away from JLL, he also co-founded, and served as president and CEO, of Bulls Capital Partners, a multi-family financing company.

Herman has a Bachelors of Science in engineering from West Point and an MBA from Harvard Business School.

Marvin is the president and CEO of American hardware store Lowe’s after joining the company in July 2018.

Prior to this, he was CEO of American department store JC Penney – a role he took on in August 2015.

During his time there, he helped the company make progress in recovering lost profitability.

He was one of five black CEOs on the 2016 Fortune 500’s greatest leaders list.

Susan is a corporate executive vice-president and chief marketing officer for SunTrust Banks.

She oversees the company’s strategies for branding, digital marketing and corporate.

Before moving to the American bank in August 2014, she was in several senior positions at several giants of the technology world, including Nokia, Apple, Fujitsu and NCR Corporation.

She holds a bachelor’s degree in engineering sciences from Harvard University and an MBA in finance from The Wharton School.