Peugeot, Lacoste and Rolex are among the sponsors of the 2019 ATP Finals held at London's O2 Arena 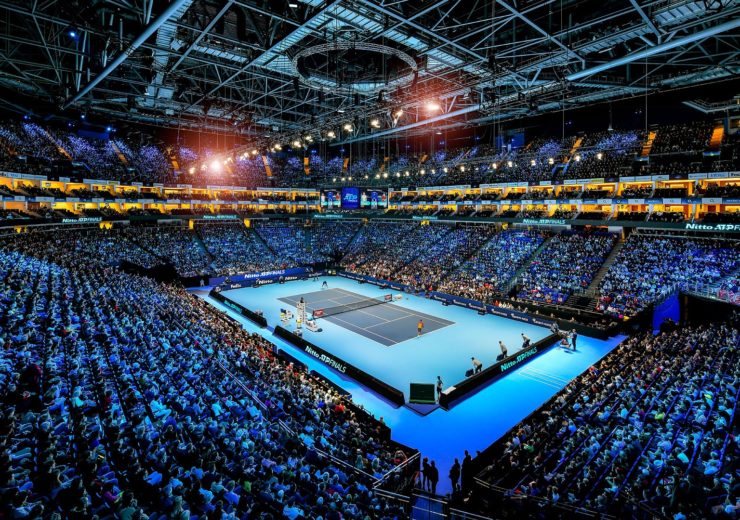 Some 12 companies are sponsoring the 2019 ATP Finals (Credit: ATP)

The ATP Finals has rapidly cemented its position as one of the leading events in the tennis calendar, with the 2019 tournament marking the tenth anniversary of the popular London event.

Broadcast in more than 180 territories, with an average viewing figure of 95 million, the Association of Tennis Professionals (ATP) has managed to attract more sponsors than the sport’s other governing bodies, the Women’s Tennis Association (WTA) and the International Tennis Federation (ITF).

With household names such as Novak Djokovic, Rafael Nadal and Roger Federer all competing for a share of the $9m prize purse, the ATP remains a favoured partner for many big-name sponsors.

Discussing the rapid growth of the tournament, ATP commercial director Laurent Delanney said: “ATP commercial revenues have increased 200% since 2009 when a number of structural changes were made to the Tour.

“The continued growth of our fan base, with TV viewership of the ATP World Tour up more than 75% since 2008, is a testament to the generations of iconic athletes who have transcended our sport, as well as the strength of our global platform of tournaments.”

Here we profile the nine sponsors of this year’s tennis tournament.

Material manufacturers Nitto Denko Corporation became the first Japanese company to take the title sponsorship for the ATP finals in 2017.

The Tokyo-headquartered firm produces a range of products used for everything from the film that protects screens on new smartphones to key components in wind turbines.

Its partnership with the ATP Finals runs until 2020.

Commenting on the deal, Nitto President, CEO and COO Hideo Takasaki said: “We are very proud to become the title sponsor of the ATP Finals.

“Featuring the world’s top men’s professional tennis players, the ATP Finals fits very well with Nitto’s philosophy, where we challenge ourselves to gain top share by utilising our unique technology both locally and on a global level.”

The company boss believes the title sponsorship would help to accelerate the global expansion of the brand as Nitto passed its 100th anniversary in 2018.

A subsidiary of Emirates Group, the Emirates Airline was founded in 1985 and has almost 65,000 employees worldwide.

The carrier has a five-year global partnership with the ATP series and is the official airline of its World Tour.

US delivery firm FedEx has partnered the ATP World Tour series since 2010.

As part of the sponsorship package, the world’s largest courier service offers 30 children the opportunity to be ball boys and girls at the London finals and reports on head-to-head results and player insights through the FedEx ATP Performance Zone website.

Tennis and FedEx share many values, according to executive vice president of global marketing Rajesh Subramaniam, including “speed, precision, anticipation and service”.

Technology sponsor for the 2019 ATP Finals is Infosys, which began its partnership with the tennis competition in 2015.

The tech consultancy provides data analytics for all ATP tournaments, including the London finals.

As part of the deal, Infosys provides statistics on player performance, stats leaderboards, performance measurements and the production of the Player Zone app.

Following the renewal of the sponsorship deal, Infosys COO Pravin Rao said: “Our work with the ATP has gone from strength to strength in showcasing the future of tennis using technology such as AI and analytics, and in providing unique and differentiated digital experiences for players, coaches and most importantly the millions of tennis fans across the world.

“Through analyses of years of rich and varied tennis data, Infosys and the ATP have not only successfully showcased potential opportunities for the entire sporting ecosystem, but for several industries as well.”

The company first became a global partner of the competition in 2016, and claims a history with the sport that spans three decades.

As part of its sponsorship arrangement, a fleet of Peugeot vehicles provides transport for special guests and athletes during the ATP Finals.

Lacoste — the fashion brand with the famous alligator logo — has been a long-term partner of the event, having first sponsored the 2002 competition, when it was known as the Tennis Masters Cup.

The clothing brand hosted an under-14 competition on the O2 Arena’s practice courts and brought the singles trophy to its Covent Garden store ahead of the start of the finals.

Based in Geneva, Rolex is one of the most recognisable watch brands in the world, with a history dating back to 1905, when Hans Wilsdorf founded the company.

It has registered more than 400 patents and pioneered multiple innovations in the watch manufacturing industry — including the first waterproof wristwatch, the Oyster, which launched in 1926.

French tennis equipment manufacturer Tecnifibre has a sponsorship deal with the ATP World Tour, which runs until 2020.

The Parisian company is an official racket stringer for the finals and runs a “young guns” contest which provides the next generation of tennis talent with a taste of the competition.

Dunlop is the official ball sponsor for 21 tournaments on the ATP tour.

ATP executive chairman & president Chris Kermode said: “Dunlop has exhibited the foremost standards of quality and attention to detail throughout the process of testing and developing the new ATP Tour Official Ball, which ensures the highest levels of performance and consistency for our players across all conditions and playing surfaces.”

Dunlop also provides the official balls for the Australian Open.

Sunglasses brand Maui Jim is the official eyewear partner for the competition.

The Hawaiian company secured an exclusive partnership with the ATP Finals and will have an onsite presence at the event.

The Canary Islands became the official tourist destination of the ATP Finals earlier this year and will hold the title for two years.

Tourism Minister of the Canary Islands Isaac Castellano said: “The Nitto ATP Finals are a perfect fit given the connection with values such as innovation and modernity, as well as an association with world-leading brands in the international market.

“Linking the Canary Islands with the Nitto ATP Finals will contribute to our international promotion and will complement our current strategy by offering an appropriate stage for the Canary Islands, as European leaders in the tourism sector.”

ATP secured an exclusive partnership with digital ticketing platform AXS for the 2019 and 2020 competitions.

AXS has introduced a paperless ticketing system with spectators scanning a page on the ATP app.

The partnership has helped to address touts by linking the ticket to the buyer through digital ID technology and capping resales at 10% above the initial price paid.