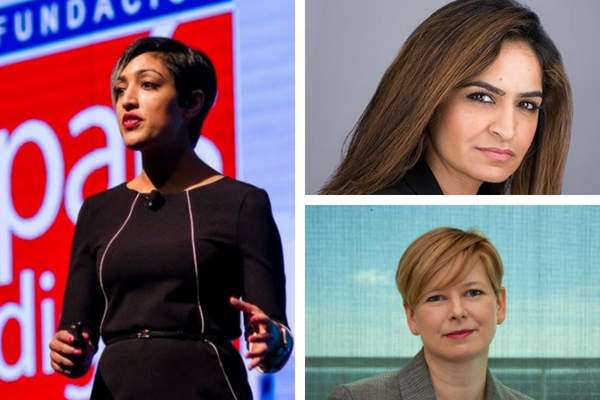 Women to Watch in 2018, including (clockwise from left) Rumman Chowdhury, Shaheen El-Sayed and Karen McElhatton

From the founders of the Plexal innovation hub and fashion website boohoo.com to senior executives at Goldman Sachs and Siemens, these are the women to watch in business.

Cranfield School of Management has released its list of the 100 Women to Watch 2018, featuring some of the best up-and-coming female talent in the UK – with many of them already occupying influential positions at major companies.

The ninth annual list recognises their contribution to business on what is a significant year for British women – marking a century since women gained the right to vote, the unveiling of the first statue of a female, Millicent Fawcett, in Parliament Square, and the first time a royal princess gets to keep her position in line of the throne.

In a foreword, they said: “Talented women are increasingly ready to take up Executive and board positions.

“However, such women are often not visible to decision-makers who influence shortlists for non-executive director positions in FTSE 350 companies.

“In this, our ninth 100 Women to Watch supplement, we continue to showcase the broad and deep female talent pool for UK plc to draw on.”

Here is a look at 15 of the women who made the list.

Carol co-founded the online clothing retailer boohoo.com along with Mahmud Kamani in 2006.

Boohoo is now one of the leading online fashion companies, selling in the UK, US and across the globe.

In her role, she oversees the company’s product, marketing and brand strategy across the UK and globally.

Carol has more than 25 years in the fashion industry, and has worked for 20-plus years supplying high street retailers.

Women to Watch in 2018: Christine Palmer

Christine is the chief risk officer for the Aldermore Group plc, where she takes charge of the credit, operational and treasury risk and compliance – fields which she has over 28 years’ experience in.

Prior to her role at Aldermore Group, she worked at Royal Bank of Scotland for 14 years, where she held a number of senior positions.

She has also worked at ING Bank, ABN Bank and Ernst & Young.

Women to Watch in 2018: Rumman Chowdhury

Rumman is at the forefront of innovation at global consultancy Accenture as the company’s responsible AI lead.

In her role, she is tasked with incubating the next generation of Accenture’s technology services.

She works with organisations such as the World Economic Forum, and the Institute of Electrical and Electronics Engineers’ wellbeing metrics standard for ethical artificial intelligence and autonomous systems.

Last year, Rumman was involved in the BBC’s 100 Women Challenge List, which brought together leading female talent to come up with ideas to solve various barriers facing women.

She currently serves on the board of directors for multiple AI starts-ups and is an AI mentor for Norwegian impact tech accelerator Katapult Accelerator.

Laura is currently CEO of BNY Mellon European Bank and The Bank of New York Mellon.

She previously worked as COO of investment services for the bank’s Frankfurt office.

Laura’s career began at Deutsche Bank and Bankers Trust Company, where she had responsibilities across the US, Asia, Australia and Europe.

Women to Watch in 2018: Shanika Amarasekara

Shanika was appointed general counsel and company secretary to the British Business Bank in 2014.

The British Business Bank is the UK government’s development bank set up to increase the supply of credit and finance to small and medium businesses so they can contribute to the economy.

Before her position at the bank, Shanika worked as general counsel at the International Islamic Liquidity Management Corporation – an institution established by a number of central banks to promote financial stability and economic development – as well as holding senior positions at RBS and Allen & Overy.

Women to Watch in 2018: Jackie Coulthard

Jackie has recently been appointed managing director at the Taylor Wimpey North Yorkshire region, after joining the British housebulder as a finance manager in 2007.

Recently, she spent most of her time as the finance lead on the company’s commercial excellence programme.

She has been in finance for about 25 years and has held positions at various levels in the automotive industry.

Women to Watch in 2018: Clare Cockerton

After moving to the UK in 2009, Clare founded and became CEO of co-working space Plexal.

When it opened its first site in London’s Queen Elizabeth Olympic Park two years ago, it was one of Europe’s largest innovation centres.

The Canada-born entrepreneur is a specialist in tech clusters, innovation services and start-up ecosystems.

She also founded ENTIQ, a business responsible for running world-leading innovation programmes for companies such as EY and Euroclear.

In addition to her other business interests, she also founded, expanded and later sold her multi-million dollar sustainable architecture firm Aesthetic Earthworks.

Women to Watch in 2018: Simone Davina

Simone is a currently a general counsel and company secretary for Siemens after being appointed in 2016.

Previously she held the same role in the company’s Netherlands office, where she had several other roles including lead lawyer and deputy general counsel.

Edwina is best known as co-founder of international data analytics company Dunnhumby, which gained prominence when it played a key role in launching the Tesco Clubcard.

She is currently CEO of Starcount, a digital start-up measuring global tastes and trends of 1.7 billion people across 12 of the world’s largest social networks.

Edwina is also the founder of The Female Lead, working in schools to promote diversity and providing mentoring for young women.

Other work she does includes being the chairwoman of Your Life, a scheme encouraging more careers in STEM (science, technology, engineering, maths) industries.

Women to Watch in 2018: Shaheen El-Sayed

Global consultancy Accenture has managing directors in different divisions and Shaheen leads its health and public services unit for the UK and Ireland.

Throughout a 20-year career, she has held global leadership roles in Asia, America and Europe, specialising in bringing emerging technologies to clients with a focus on new digital services.

The tech enthusiast also works with leaders to raise awareness of BAME (black, Asian and minority ethnic) representation within business, while she is a member of the UK and Ireland executive leadership team.

Women to Watch in 2018: Jasvinder Gakhal

Jasvinder started her career as a secondary school maths teacher, before going on to work for Direct Line Group – where she is now the director of commercial insurance.

She has had to slowly work her way up the ladder since joining the British company in 2007.

In her position, she covers multiple disciplines including marketing, digital and telephony operations.

Her focus is on Direct Line for Business and is the driving force behind new propositions that will help transform the way customers buy small business insurance.

Jasvinder leads a team of more than 300 employees across a several locations.

Amelia is chief of staff to the CEO at BAE Systems, the British multinational defence, security and aerospace company.

Her career started in the Royal Navy as a weapons engineering officer, a role she did for 11 years.

During her time there, she led an engineering team on board HMS Ark Royal throughout the Iraq War.

She worked her way up and, in November 2016, became head of engineering for BAE’s naval ships combat systems division, leading a team of 700 engineers across several programmes.

Amelia spends her spare time being a STEM ambassador and school governor.

Women to Watch in 2018: Joanne Hannaford

Joanne is a partner within the engineering division at Goldman Sachs, a role she took on in 2014.

She has worked in a number of positions across the technology sector at Goldman Sachs both in New York and London since joining the firm in 1997.

Joanne has a wealth of experience in corporate governance and serves on the technology executive leadership group and the firmwide technology risk committee.

Women to Watch in 2018: Karen McElhatton

Karen is currently the group chief information officer for the McLaren Technology Group.

In her earlier career, she worked with Gillette Australia and Procter & Gamble, both in Switzerland and the UK.

Jane is the global chief information officer (CIO) for consumer goods giant Unilever and is in charge of driving the company’s sustainability agenda through technology.

Before working for Unilever – which owns brands including Persil, Cornetto and Radox – she was CIO for Thomson Reuters.