1,000 Companies to Inspire Britain: Top SMEs keeping the UK in the black

With Brexit looming, the UK's SME network - commonly referred to as the ‘backbone of the British economy’ - is going to be more critical than ever to the UK’s continuing global market relevance. To that end, London Stock Exchange Group has released its 2018 edition of the 1,000 Companies to Inspire Britain list 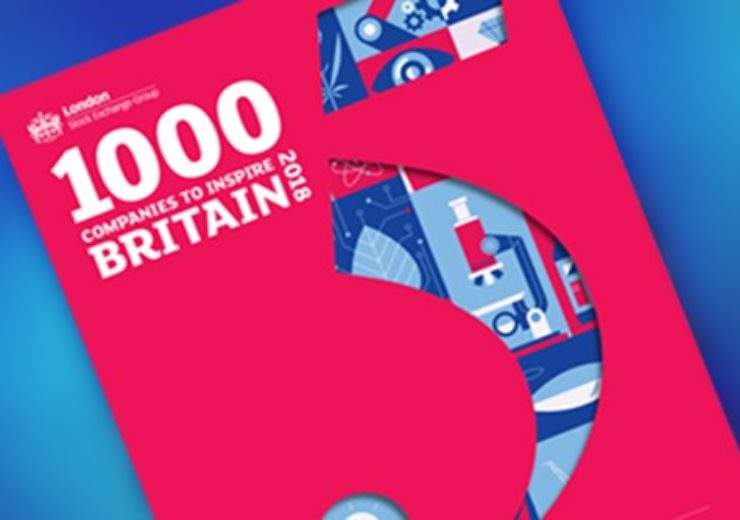 From high street butchers to precision engineers, each year London Stock Exchange Group lists its 1,000 Companies to Inspire Britain list to celebrate the most exciting small and medium-sized enterprises (SMEs) in the UK.

To appear on the list is regarded as a prestigious accolade within the business world and often pre-empts a bright and prosperous future for the featured companies.

It comes as part of a report that analyses business trends among SMEs and assesses their challenges, potential and impact on the UK economy.

Chancellor of the Exchequer Phillip Hammond said: “Small businesses are the backbone of the British economy with a combined annual turnover of £1.9 trillion and employ 60% of private sector workers outside London.

“That’s why, whether they are family-run firms or tech start-ups, we are supporting high growth SMEs to achieve their potential.”

This year’s release is the fifth edition of the report, and found an average revenue growth rate of 71% for the companies on the list.

The fastest-growing region was the North West, with a 232% annual average revenue growth rate, while 60% of the companies on the list were from outside London and the South East.

In light of the encouraging figures, we take a look at some the most promising companies from various key sectors.

It has been creating bespoke kitchen worktops, fireplaces, and tables as well as hand-finished architectural stone masonry and flooring for the last 90 years and has become a leader in its field – with a 2017 turnover of more than £24m.

“We have seen opportunities to capitalise on new technologies as an aid to traditional craftsmanship.”

Able to trace its roots back almost three decades, Carfulan has expanded exponentially over the years and now supplies advanced manufacturing solutions to more than 700 customers across industries like aerospace, automotive, oil and gas, medical, design and more.

Since adding 3D printing to its range of capabilities in 2007, the company has gone from strength to strength with a turnover of £5m in 2012 increasing to £12m in 2017.

Managing director Chris Fulton says: “We offer best-in-class solutions at every stage of the manufacturing process and we’re able to do it for businesses of all sizes.

“There is a growing demand for smaller and more intricate manufactured parts and components – for example, in the medical sector, where materials and specifications are covered by tight regulations.

“Our products and software can help businesses to meet these demands quickly, efficiently and with unerring accuracy, offering them a rapid return on investment.”

Gloucestershire-based Ecotricity’s 71 wind turbines comprise a capacity of almost 82 megawatts (MW) and collectively save more than 100,000 tonnes a year in carbon dioxide, making it one of the leaders in the UK’s green energy sector.

Since delivering its first supply of green electricity to the former Cheltenham and Gloucester College using landfill gas, it’s built a portfolio with over 200,000 customers and had an annual turnover of £126.5m in 2016.

Ecotricity founder Dale Vince says: “We are a hybrid organisation, mission-led like an NGO (non-governmental organisation) but using the tools of business to achieve that mission, which is to advance sustainability.

“We operate in the fields of energy, transport and food, making more sustainable options available to homes and businesses in the pursuit of greater sustainability and, ultimately, a green Britain.”

In 2017, First Mile collected more than 30,000 tonnes of waste for reuse from businesses in London and Birmingham as part of its aim to ease the corporate recycling process and inspire companies to be more environmentally responsible.

It has a fleet of 67 vehicles, which produces less harmful carbon dioxide and nitrogen oxide emissions than one traditional London bus.

“We have helped customers through tough economic conditions by making recycling easier than ever, so they can do more and reduce costs.”

“On average and to date, we have added 30 new customers a day and 70% come via word of mouth.

“We will also be continuing to develop our technology to build a robust platform that will be the foundation to expand our service to businesses nationally.”

Rearing pigs, sheep and cattle in North Yorkshire to supply its seven shops in London, Loughton and Essex, The Ginger Pig is an artisan high-street butcher in an old style.

It turned over £15.6m last year and currently employs more than 100 people.

Founder Tim Wilson says: “From very humble beginnings in the early ’90s, The Ginger Pig has been at the forefront of bringing butchery back to London’s high streets.”

The company originated in Borough Market, London, and now plans to expand its network of seven shops nationwide.

The company makes more than 130,000 sausage rolls each year to sell in its shops.

But Mr Wilson explains it is about more than just meat: “We aim to pass on our knowledge to the customer, to better educate them in all aspects of butchery and farming, from the animals we rear in North Yorkshire, to knife skills and proper meat cooking.”

Serving rustic Caribbean cuisine with a playlist and atmosphere to match, Turtle Bay seeks to provide a great meal as well as a fun night for the UK’s eaters and drinkers.

Since being founded in 2011 by Ajith Jayawickrema, the chain has opened more than 40 sites across Britain and had a turnover of £63.7m last year.

“A huge part of the Turtle Bay experience is about the atmosphere in our restaurants. We create a positive, fun, happy ambience,” says Ajith.

“It is all about capturing the heart and soul of the Caribbean through delicious food, tropical cocktails and an infectious reggae soundtrack.

“Opportunities lie with adapting to the trends of lower sugar and the prevalence of vegan and vegetarian food.”

The team of product designers, software engineers, gaming experts and film directors at Unit9 make everything from a “magic mirror” to show men what they’d look like with different hair to video content for clients like Samsung and Vodafone.

Founded in 1997 by Piero Frescobaldi, the multidisciplinary production firm has grown rapidly and now employs more than 150 people, with offices in London, New York, Los Angeles and Berlin.

“What worked yesterday may not work tomorrow and signs from the market inevitably arrive too late.

“So, we anticipate by inventing new offerings with one constant: young, independent, talent-obsessed with craft.

“Putting all the efforts in people and quality, not the pocket, has been our winning strategy.”

Guilford-Based Eagle Eye allows its corporate customers – including Tesco, John Lewis, and Pizza Express – to market, validate and redeem their customer promotions, offers, and rewards at scale and in real-time on its Eagle Eye AIR digital platform.

CEO Tim Mason says: “Eagle Eye helps businesses in the retail, grocery and hospitality industries to create a real-time connection with their customers and drive engagement.

“This allows our clients to improve their customer offer and accelerate their innovation.

“Real-time offers enable highly-relevant targeting, giving customers much more value and offering companies the chance to truly understand their customers, rewarding them whilst they are still in store, thereby maximising engagement.”